Made by Joyce Chen, jjlennon and Sky Ding

I started off the meme tennis with a combination of the trolley problem and a "pass me the aux" meme, an example of which can be found here https://pics.onsizzle.com/papi-memes-the-bardockobama-me-yo-pass-me-the-aux-3375510.png. I used the guy dancing in this image and edited it to look like he was holding the lever in the trolley problem. I thought the mixing of two memes would be a funny way to spin the trolley problem. 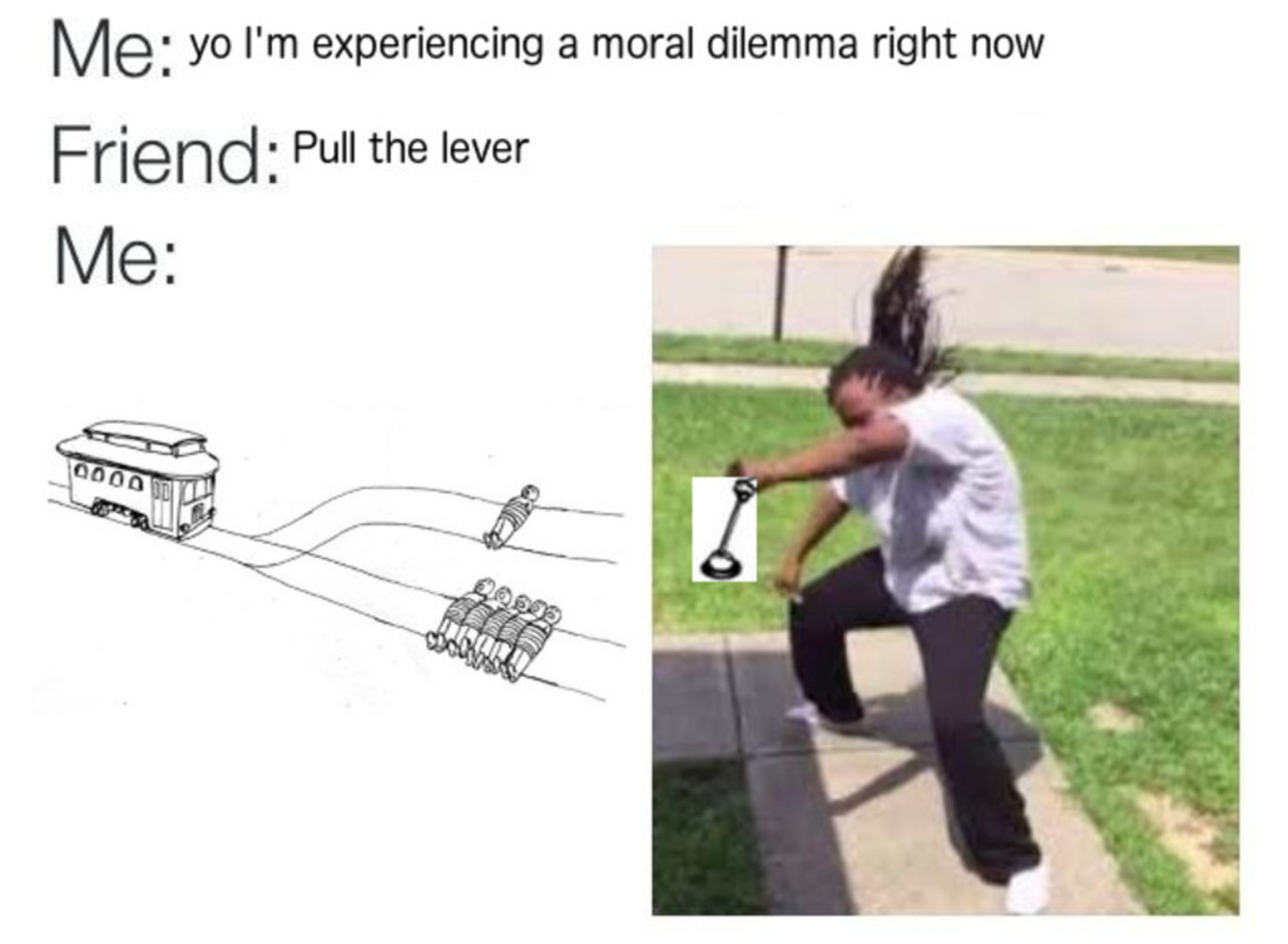 For the second serve, I wanted to combine the trolley problem with the 'If your mom and your wife both fell into the river at the same time, whom would you save first"[1] meme so that instead of questioning one's ethics, the problem is now related to family values, cultural values, and relationship ties. It annoyed a lot of people who were asked this seemingly deep question by their friends and families, so I decided to keep the image of this crazy guy pulling the lever on the right so that it not only continues the idea of the first serve, but also shows how desperate the guy would be to be asked such a meaningless question. 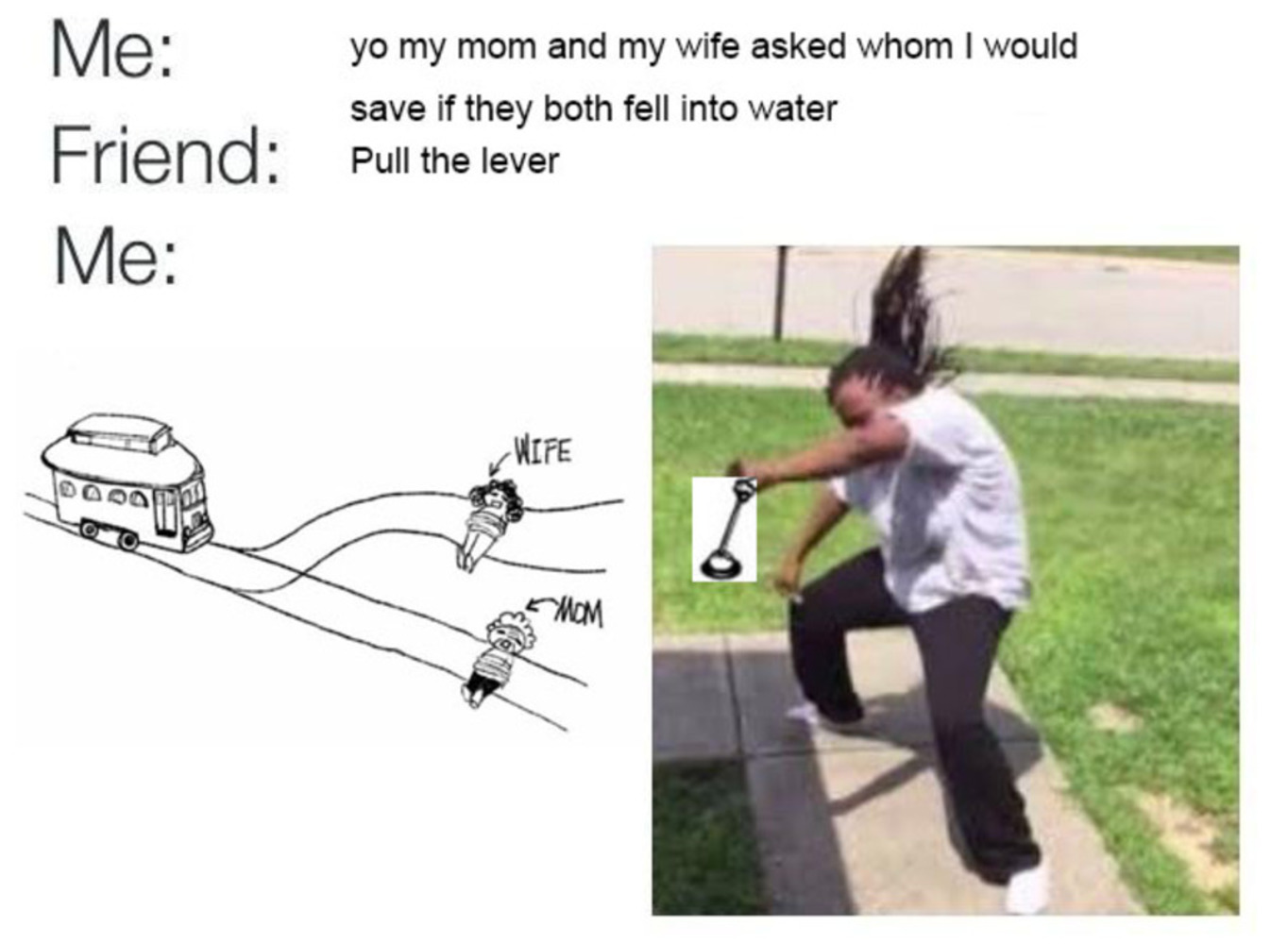 For my turn, I saw the "Pull the lever" idea in the previous serves and was reminded of "Pull the lever, Kronk!" from The Emperor's New Groove. I wanted to take my creation in a slightly different direction from the original trolley car problem, so I chose to not use the classic meme and instead continue the ideas through a different background.

I liked the way that the second serve had the idea of someone being annoyed and frustrated, so I tried to continue that in my creation. I also wanted to continue the "morality" question that the trolley problem is based on, so I added a bit of a push towards one direction of the ethical dilemna. 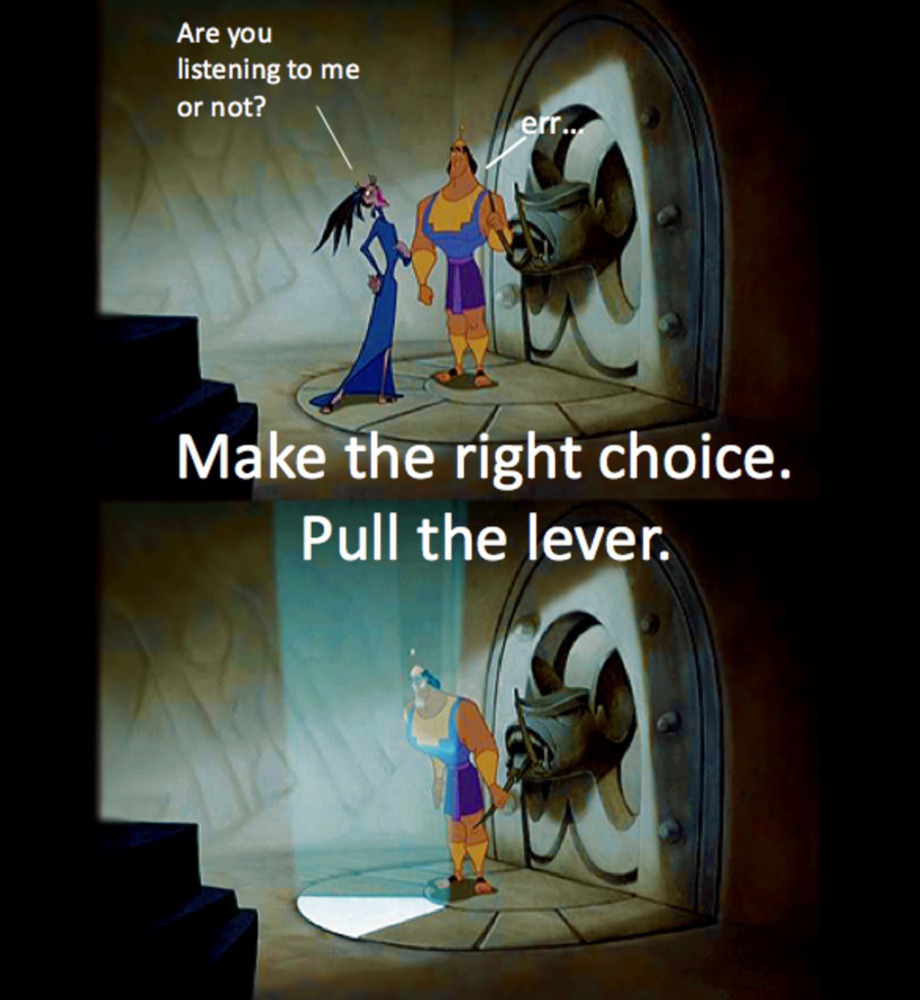 I took the idea of using Kronk's lever image from the third round of our meme tennis and expanded on it. I decided to cut and paste the pictures of Kronk and Yzma into the trolley problem original image, with Kronk holding the lever and Yzma telling him to pull it. I liked how the previous serve did something similar to my first serve in combining the trolley problem with something else people would recognize, so I continued to work with the images of Kronk and Yzma. This eventually led to our final version of our trolley problem reproduction.

Remembering that Yzma is a villain from The Emperor's New Groove, I got this idea of combining The Little Mermaid and the trolley problem from the previous serves. I have always been ambivalent towards whether or not a villain should be killed; it is an ethical question similar to the trolley problem but slightly different because if the villains weren't killed, there's a big chance that the protagonists would die. The decision is more than obvious if someone was to make a choice between little mermaid and the sea witch, but why is it acceptable that people feel relieved and happy after the villain is killed? 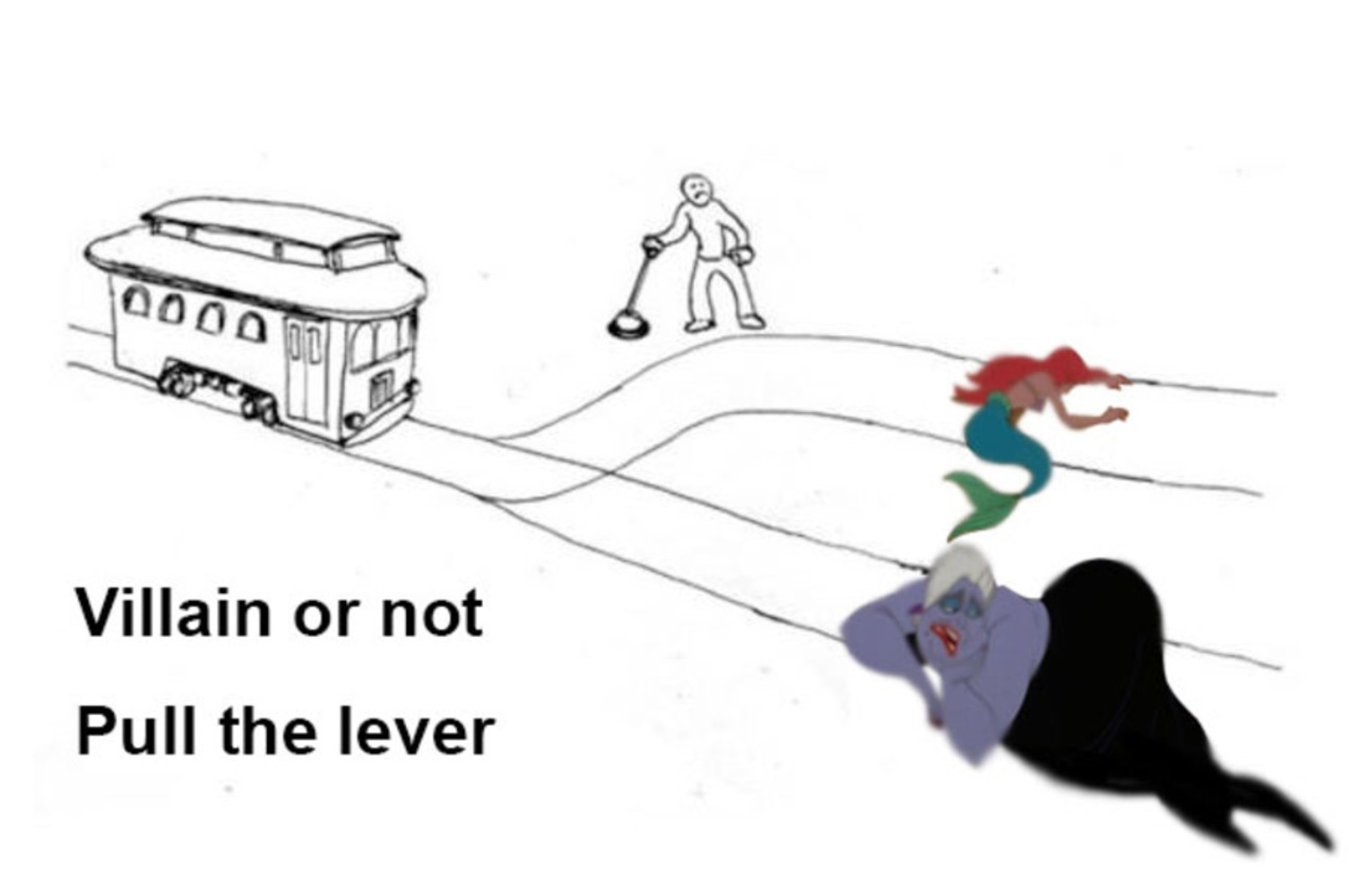 For this last turn, I wanted to continue transitioning away from the original trolley car problem and into something more unique. I chose to put Prince Eric as the one in charge of pulling the lever, since we already had some of the characters from The Little Mermaid on the picture. I also wanted to change the trolley car to something more fitting to the setting of the rest of the picture, so I pasted a picture of a trident going down the tracks. Again, I wanted to preserve the idea of morality/ethics, so I changed the tagline to "Mermaids and Morals". 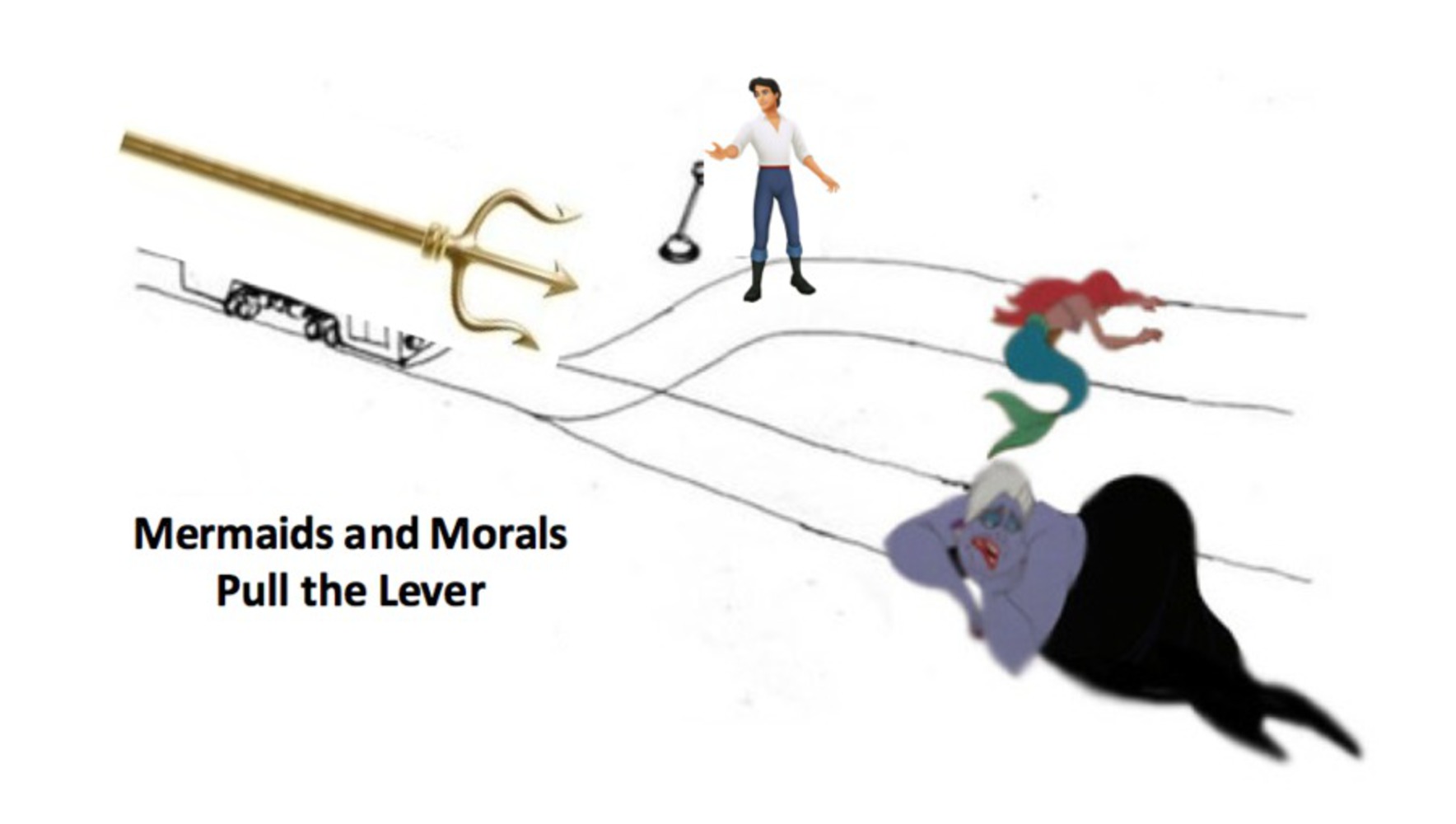 John: Since I had trouble coming up with a first serve, I tried to come up with something other than the trolley problem that I could somehow fit into it. I came up with an image that looks like a guy could be pulling a lever, and I added the trolley problem to it. I think even though we didn't stick to that exact image, the idea of spinning other images or memes to have some sort of relation to the trolley problem stuck with us throughout the different serves. We continued to take the previous images ideas and intentions and changed the content.

Sky: For the second and fifth serves, I was trying to find meanings in my meme, so I decided not to work on any of my first thoughts after seeing the previous serves. I spent almost half of the 30 minutes just staring at the images we have, so the actual image processing took only 15 to 20 minutes for both of my serves. I used a SketchBook app on my tablet and drew a new trolley problem scene for the Mom versus Wife case, and then I just replaced the original trolley problem image form our first serve with my drawing, and edited the texts using Adobe Photoshop CS6. It was similar for the fifth one, after I came up with the idea of doing a trolley problem of Disney villains versus their respective protagonists, I found an image of Ariel lying on the beach looking weak,[2] and I thought it would look interesting if she was placed on the rail road. After that it was just simple Photoshop image processing.

Joyce: It was interesting to be able to work with each other's creations as starting points for our own volleys. I think that's how most memes really rise to popularity, as it only takes one or two popular reworks of an image for everyone to recognize it. I think I struggled a little bit because I really wanted to move our work off of the original trolley problem image, but it was difficult to transition that change. This is similar to traditional meme culture - one can't easily change what memes and images that other users post, and it becomes more about just working with what's popular.

John: I initially had a hard time coming up with a serve to start off with, but once our group got rolling it was fairly easy to build off each others additions and ideas. This goes to show just why memes are spread so fast and easily since once an idea is made with these images you can spin them any way to want to create something with a different meaning.

Sky: I wasn't familiar with how memes or other spreadable art are created before doing this meme tennis project, so I really like that we get to simulate the process and I'm also surprised by how different people have so many different unpredictable ideas. I was told that memes don't need to have deep meanings, but as a "beginner," it was hard to imagine the idea behind a certain meme without trying to figure out why and how. So I spent more time than I should thinking about how this can be more than just a meme, but soon I got used to not thinking deep after seeing the other serves. It was a really interesting experience.

Joyce: For my pictures, I added to the other creations by using pictures online. These were mostly screenshots from Disney movies or pictures of Disney characters. The pictures I used can be found at the following links:

I like how it leans into meme aesthetics and keeps it rough as a way of quickly producing - it feels like a meme you’d find on the internet and this is great. But it doesn’t feel like it really developed into a real conversation. For example, layer 4 pushes the thread into a new visual context but keeps the concept going, moving it forward. Layer 4 immediately switches back to the previous instead of really pushing into the new space. This was a real opportunity to riff and push into a new visual form instead it feels like a bit of a retreat and a missed opportunity to end up somewhere really unexpected at the end.

The reflections highlight some of the challenges you faced in reworking the concept so I think you’re aware of it, but it’s something to think about for future work.