Children of the Earth

For my final composition, the musical piece I chose was Children of the Earth by Ayur.

This piece is largely instrumental, but even with the limited vocals I can see a story painted out through the rhythms of the song.

The vocals are children's voices, and they are asking to be told a story. The story that I see is a story of the world - a complete collection of all the components of the world and all of the things that have happened in history.

Commented on: Sound of Silence (Visual),  Game of Thrones Trailer (Sound), and Destruction of Dalaran (Sound). 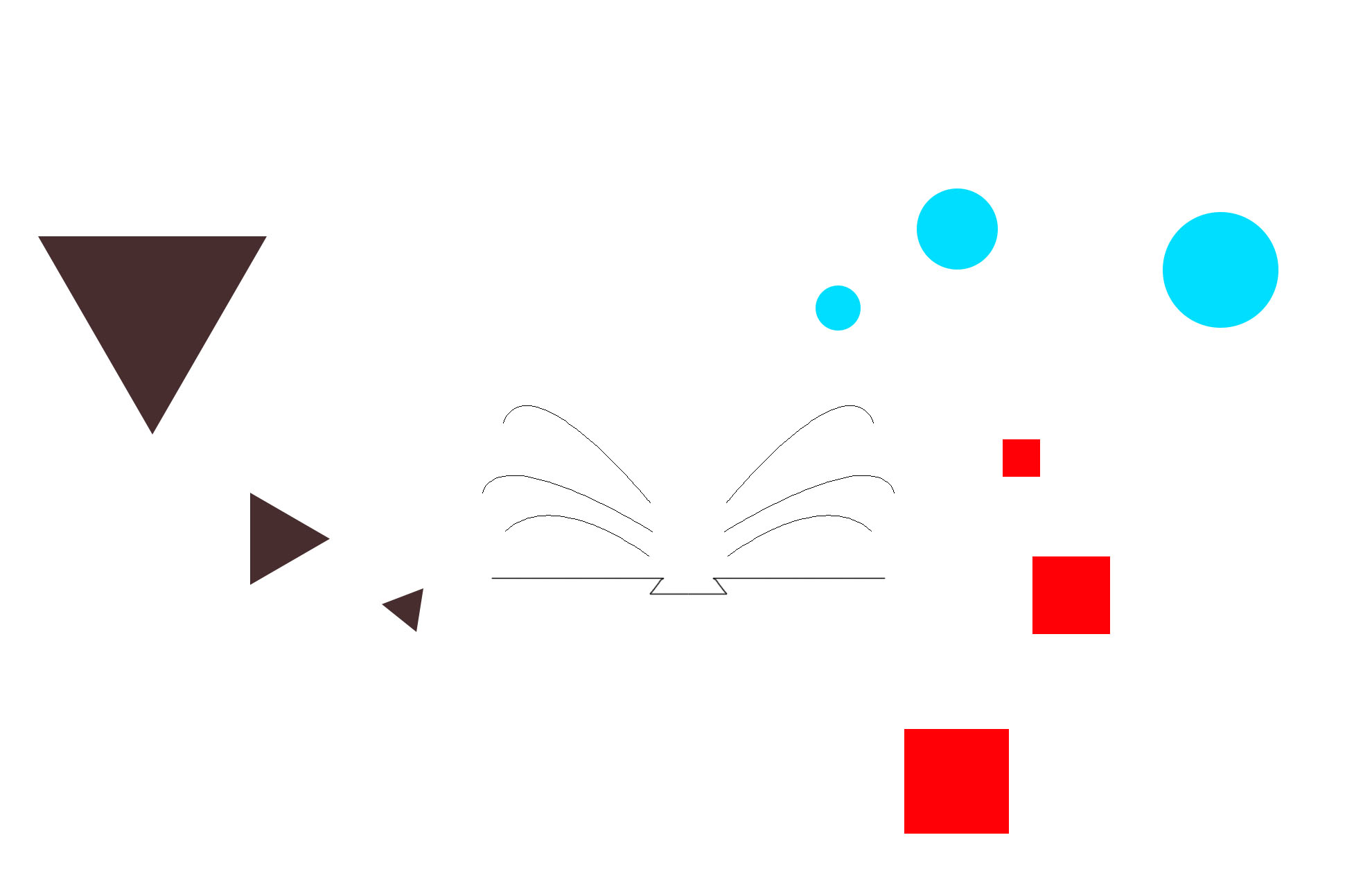 This is a very rough sketch of what I was planning to do. In the center, there is a book. At 0:43 in the song, there begins a sequence of repetitions most distinctly defined by 3 strong beats at the beginning of each cycle, followed by a repetitive sequence of tones. The idea was to capture this rhythm using 3 of the same shape, repeated 3 times with different sizes. Each of these sets of three represents the start one particular story of the world, exploding out of this book of life. 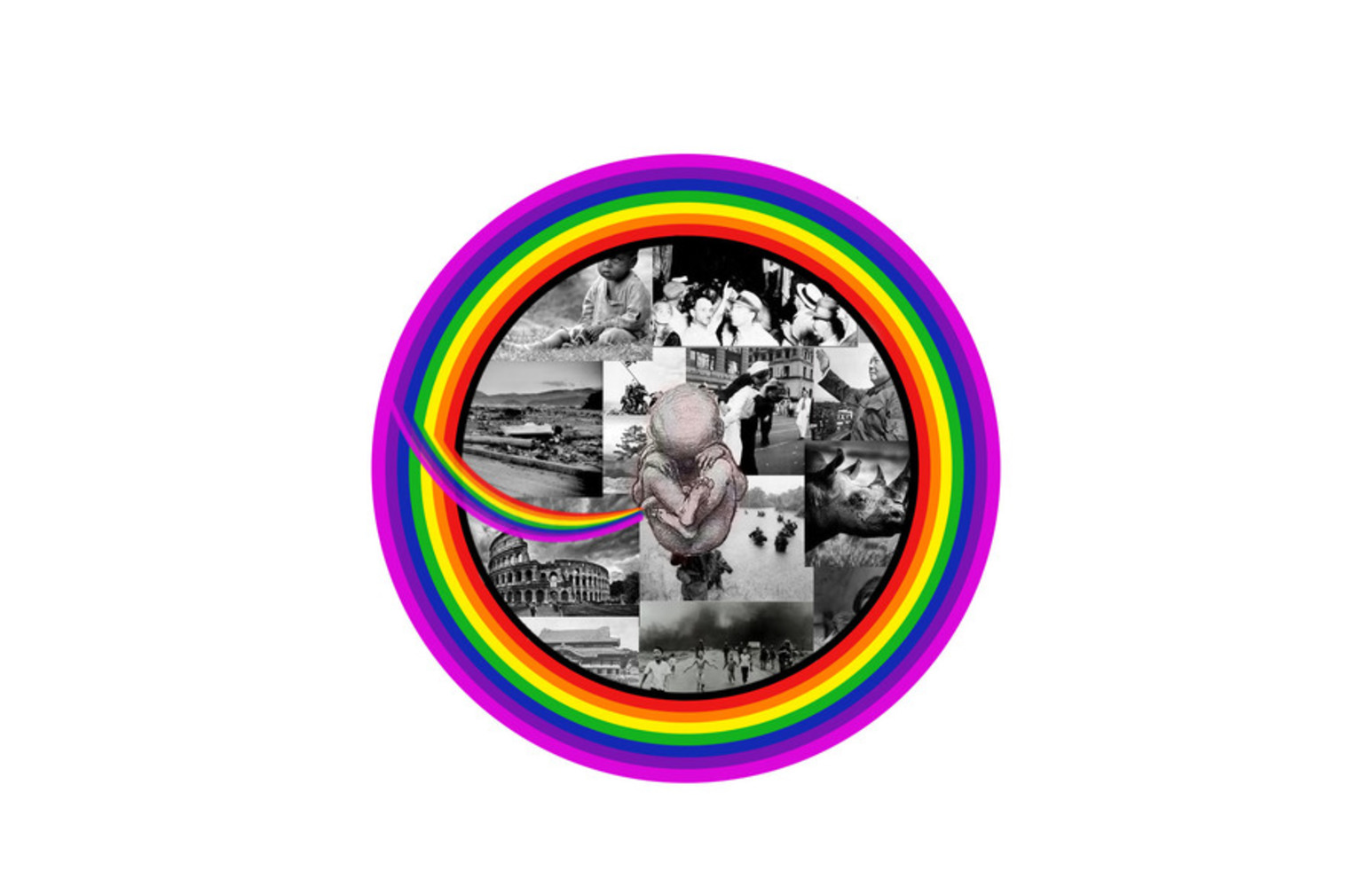 After hearing some criticism, I decided that a minimalist approach might not be a very good way to represent representation of a musical piece with such richness - there is a lot of detail within the samples and the rhythms, so it should be reflected in the visual representation. I also wanted to relate the piece to some of the ideas expressed in the McLuhan reading, namely the fact that with how technology has advanced, the world has become a place where everyone is your neighbor, and all of the information in the world is available to us at light speed.

In the center of the image there is a fetus which is surrounded by a circular womb. The "amniotic fluid" consists of images - pictures of nature, of man-made objects, of suffering, and of happiness (not to just represent these things, but to represent the world. Sadly there are only so many images that can fit in there, so these are just some of the things that have been represented). That is the world that we have been born into. All of these objects, people, and events have all made some impact on the world that exist in now. Now with the power of technology we can see more of our world than ever before, both in the present and in the past.

I chose to replace the book in the center with a fetus because I feel that is more central to the idea of the piece. The events of life do not stem from a single source - instead in the scope of each individual we are the single recipient and life and all its components surround us in a constant stream of events. The story being told is that of the earth and all that has ever occurred in it, and we, as children of the earth, are the listeners. 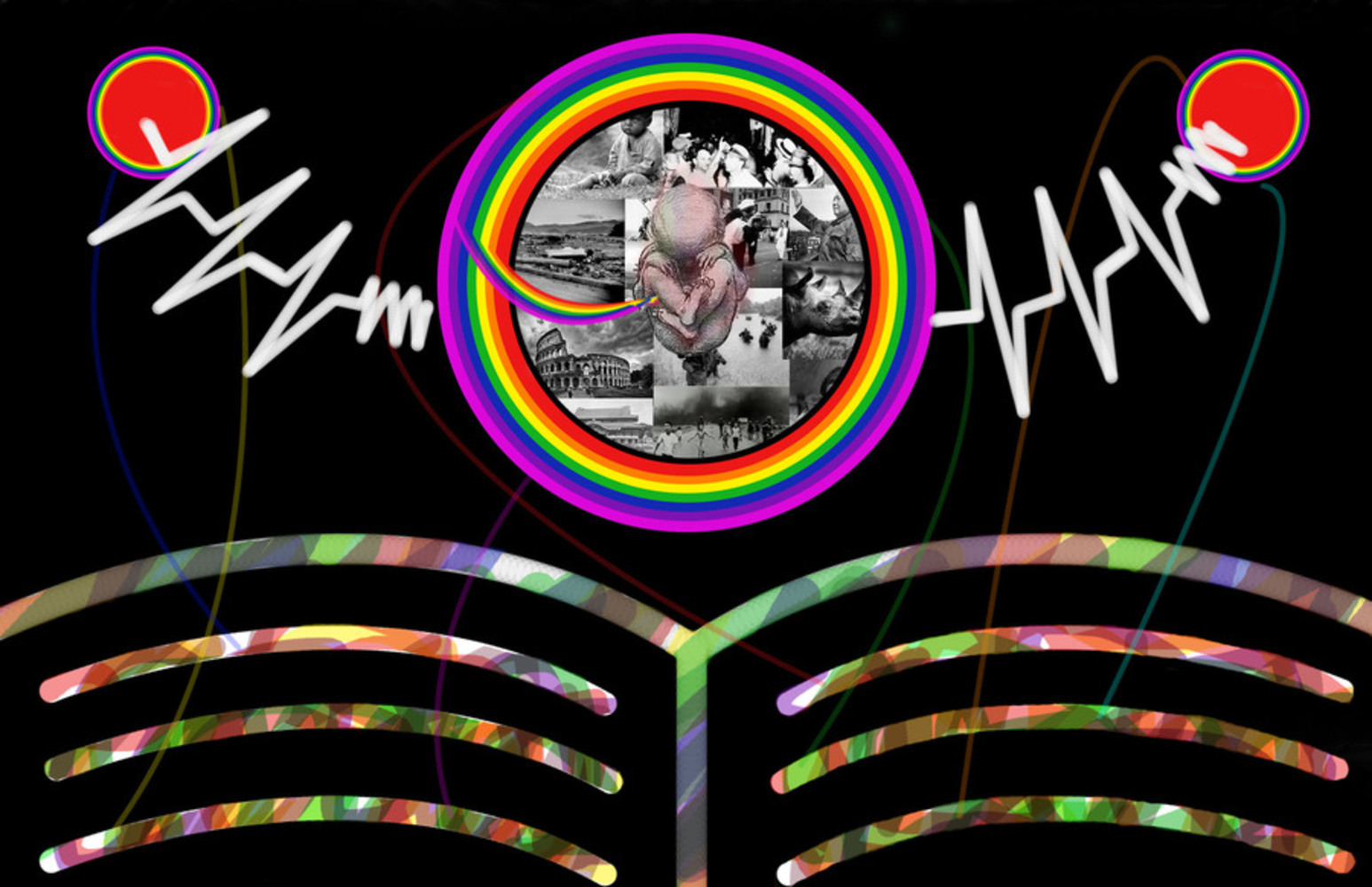 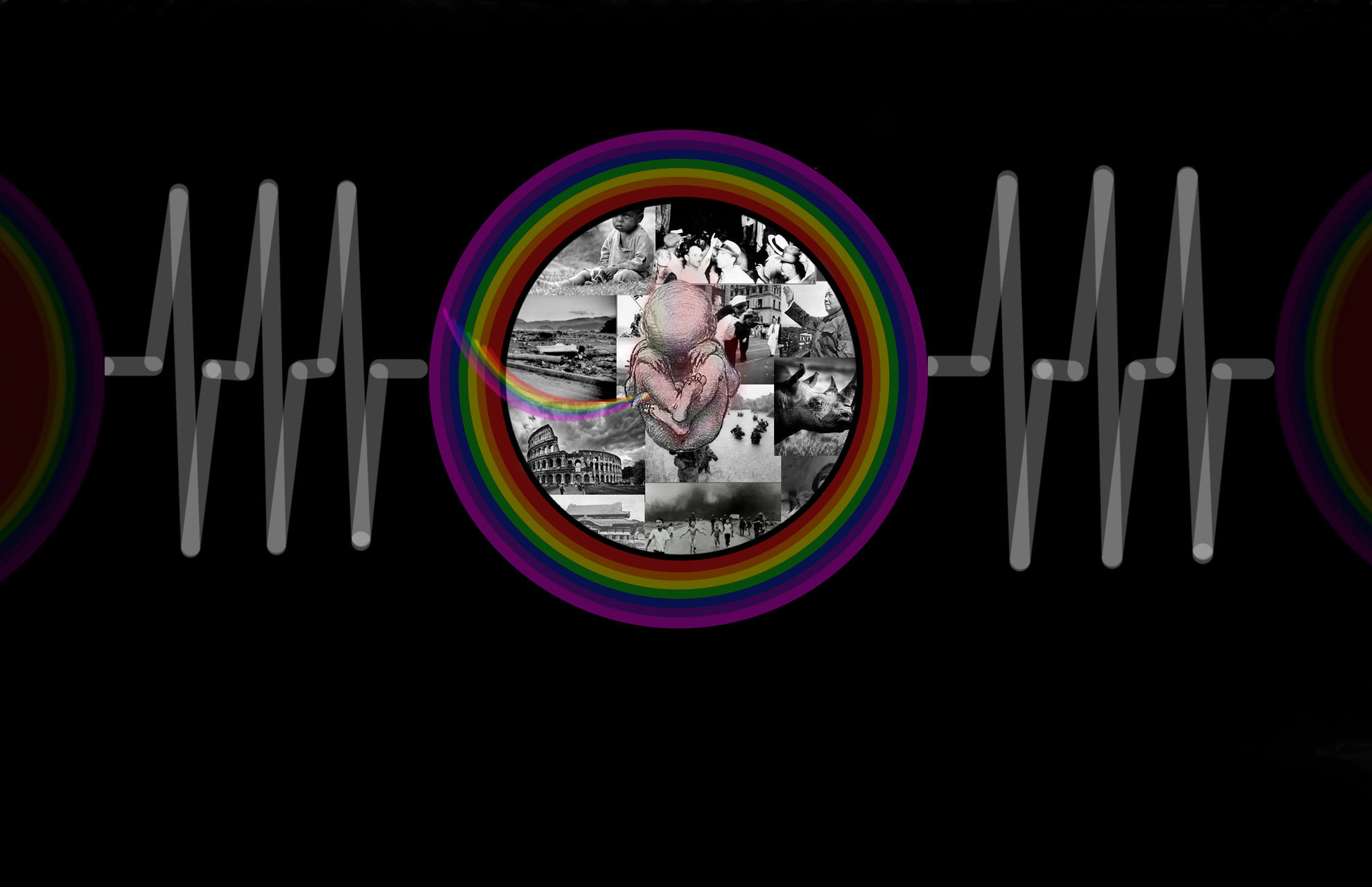 After hearing more opinions and reflecting back on the second draft, I came to the conclusion that there was just a bit too much going on in the composition. The book was very colorful, and the excess lines kept drawing the eye all over the picture, making it hard to focus. The wombs were also just a bit too vibrant, making it hard to view the content inside of them.

In this final composition, I decided to take out the book altogether once again. Although I would have liked to keep it, I couldn't quickly find a way to integrate it in a way that didn't seem out of place. Instead, the focus is placed back onto the central womb and fetus. I also reduced the opacity on the womb so that it is a bit easier on the eye, and gives a much softer feel to the composition.

The images stayed the same because I wanted to keep that wide range of elements. There are good things and bad things that happen in the world, but we are all a part of the world that has been created as a consequence from those things, and we should live knowing about them.

I kept the heart monitor readings in order to tie back to the three beats discussed at the beginning in the first prototype. This ties to the rhythm and repetitiveness of the song, and speaks to the cyclical nature of life. I also kept the two fetuses off to the sides, connected by the beats to represent how the way in which we live our lives will affect those around us and lead to the creation of a new, different world.

There are also some things that I didn't address earlier which many were confused about, so I will go into more detail now:

The reason why I placed the placed the images inside of the womb rather than outside is because the fetus represents us through all stages of our lives, not just a literal fetus that has yet to enter the world. We are constantly developing as we learn more about the world that we live in. There are no pictures outside because in the world we exist in is a world that resulted from everything that has already happened, and that is the world we see. The space outside of the womb represents the world that has yet to be created by the actions of those in the present. For this reason I also chose to make the background black, giving a sense of void.

I chose to make the womb using all colors of the rainbow because it represents the visible light spectrum and more generally, sight. The pictures are black and white because they represent the raw information that we have presented to us. It is through our own sight that we give meaning to these events, and so that is why the color is feeding through the placenta, imbuing the originally black and white fetus with certain hues, turning it into a unique individual.

Children of the Earth is a composition based on the song, Children of the Earth by Ayur. It is a depiction of life and the world that we live in. It combines the power of photographs and computer composition to tell a story of us as people - as children of the earth. We are depicted as a fetus, something that is in a stage of rapid development and growth, because we are always growing and learning regardless of who we are. There is an overwhelming amount of information available to us in the world now, and when we expose ourselves to it and interpret it, we become saturated with new colors and become new people. We are all connected by a certain rhythm of life, and as we live and die in this cycle of life we influence others and create a new world for them to grow in.

1) How do you respond to the piece now?

I think that this piece conveys its message proficiently (although there is probably some bias there). When I look at the composition the first idea that pops into my mind is life, with the fetus and the heartbeats. I feel the weight of the pictures within the womb, and the expanse of information represented by it, but I get the sense that the fetus is not in danger, but rather absorbing the information and growing. After trying to compose this, I feel like I can appreciate the effort that goes into even simpler compositions more than before.

2) How would you have responded to this piece before this module?

Before this module I never really knew how to look at art. I had actually gone to the Carnegie Art Museum in the summer because I was here for summer courses, and I would look at paintings and images very briefly before skimming the curatorial statements and then moving on to the next exhibit. I don't think I would have taken the time to analyze why certain objects were more opaque than others, and why certain colors and shapes were chosen for the piece. I probably would have looked mainly at the pictures because I could relate to them a little better than the rest of the composition.

While I have no experience in critiquing visual art, I hope some of my comments may be helpful.
I think the less vibrant rainbow helped a lot in not distracting the viewer. However, I do think that it might be nice if instead of a rainbow with red orange yellow etc, you had your rainbow gradually transition to more complex colors that might be a little easier on the eyes. I really like your heartbeat monitor idea. I think the fetus actually holds a good level of opacity. Also, the black background is a nice touch as well in contrasting everything. I can see you did a lot of great work between your iterations!