Made by aduan1, Jared Moore, Claire Chen and Yirui Zhu

We created a wire tree which people could charge their phones on, and would play bird calls when people plugged in.

"This wire tree will provide your phone with energy and charge, which allows you to provide the environment with the sounds of nature." The intention of the work is to juxtapose two contrasting concepts: our growing addiction to technology in the digital age and our diminishing appreciation for nature. By plugging in your phone to charge it, you initiate a series of layered bird calls. Two different interpretations of the assigned material wire (steel wire and charging cables) are used in this work so that we could produce a piece which is as focused on the medium as it is on the conceptual aspect. The goal of this work is to serve as a reminder to people not to lose touch with nature, something which would never have been a problem before handheld devices became popular. We take a balanced approach: instead of contrasting all things digital against nature, we want to show that these two things can work in harmony with each other. In our installation, they only exist alongside each other- the sounds don't play unless a phone is plugged in. We want this concept to be something which the audience takes away from interacting with our installation. 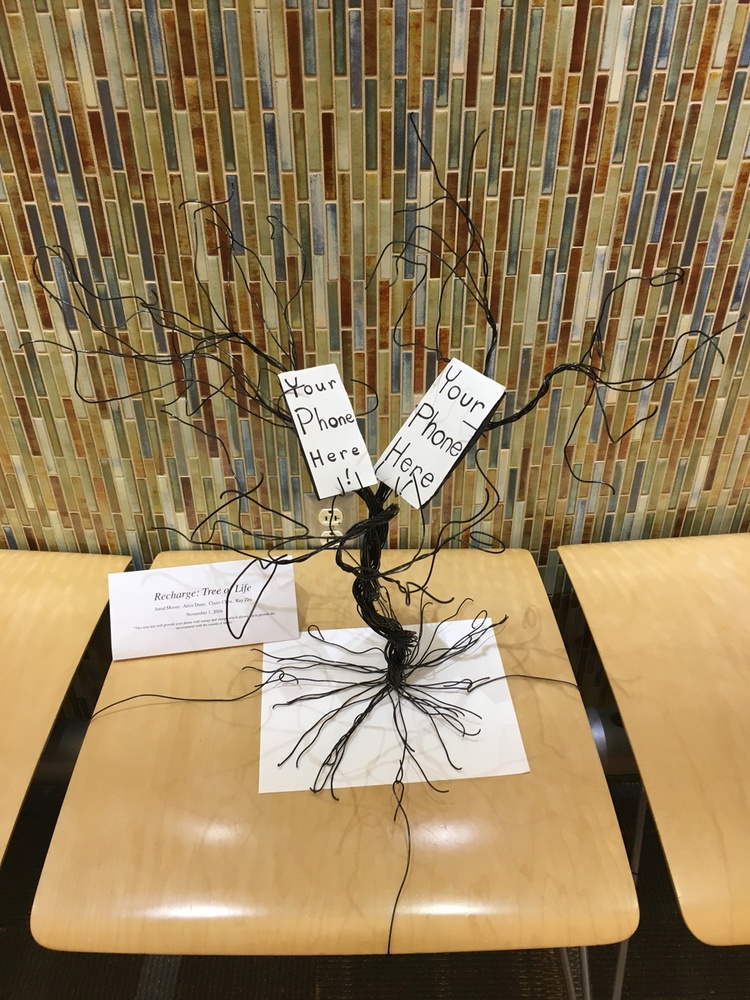 The backbone of our idea is related to "tree of life." In our project, we intend to make an installation that both charges one's phone and rejuvenate the user by relating back to nature, which is where all lives originate. The use of wires and charging cables also relate to the idea that the tree of life connects all forms of creatures.

When we were first assigned wire, we thought about looking at some sculptures and found Alberto Giacometti’s work to be inspiring since it uses thin metal that almost resembles wire but yet forms certain non-abstract shapes. Then, we went to to more specifically investigate wire sculptures, and found Alexander Calder’s works to be rather inspiring aesthetically since we don’t want to make trees that look too dense. For the actual wire tree, we investigated Kue King. However, although we took the basic idea of a wire tree from him, we decided to simplify the tree so that it looks clean.

The implementation also draws on ideas from the two readings. First, Aesthetics of Interaction by Kwastek inspires us to incorporate some interactive components, so we decided to use charging cables since they are wires and refer to “life.” We wanted the audience to plug in their phones to the charging cables to interact. We also wanted to add something related to embodiment after reading Embodied Interaction by Dourish. We decided to incorporate sounds from nature like bird and tree sounds so that the audience can feel like being in nature and therefore rethink their embodiment in the world.

When picking our sources for the bird sounds, we decided to incorporate sounds of birds from all over the world so that the piece can be more incorporative. 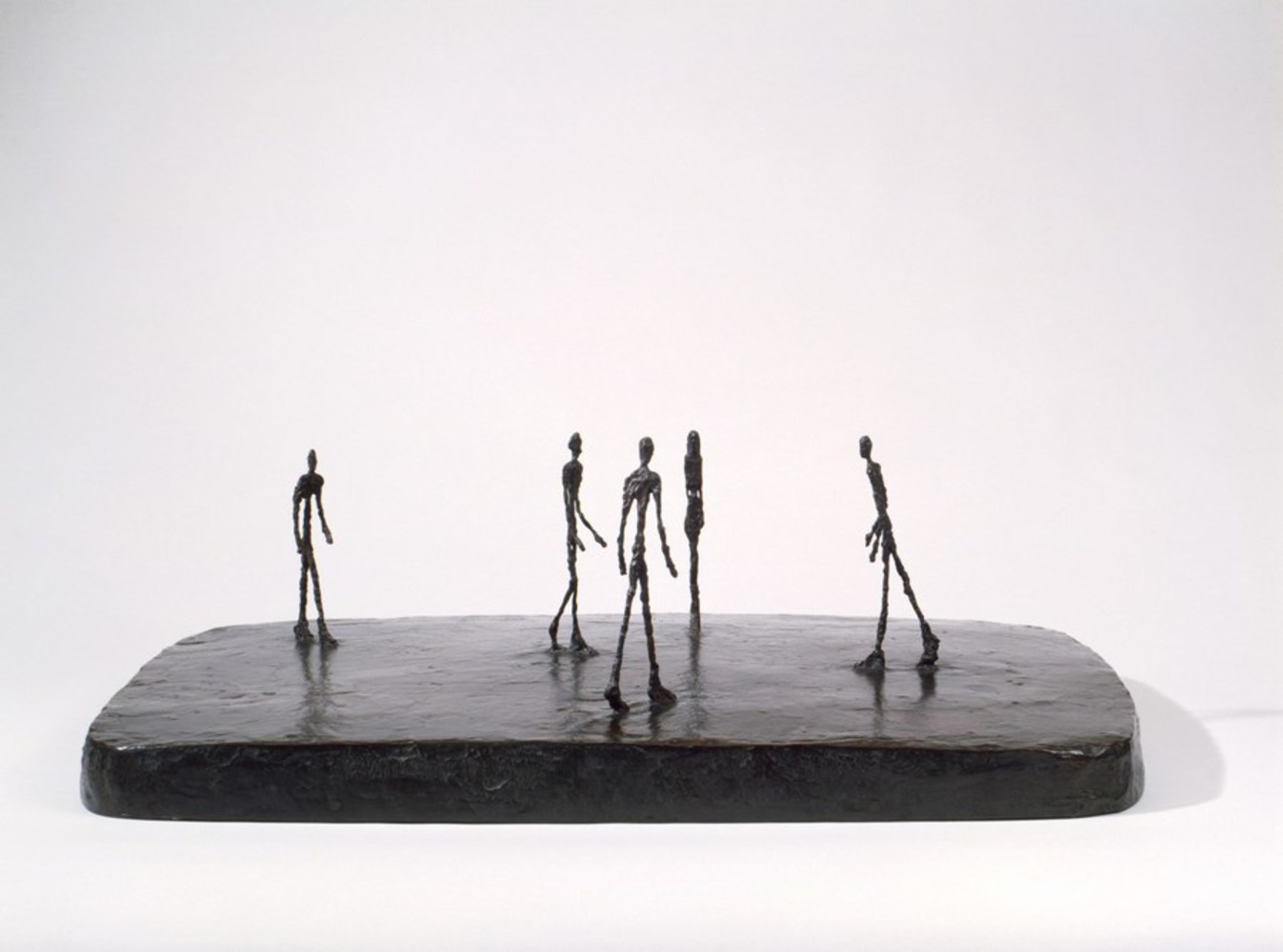 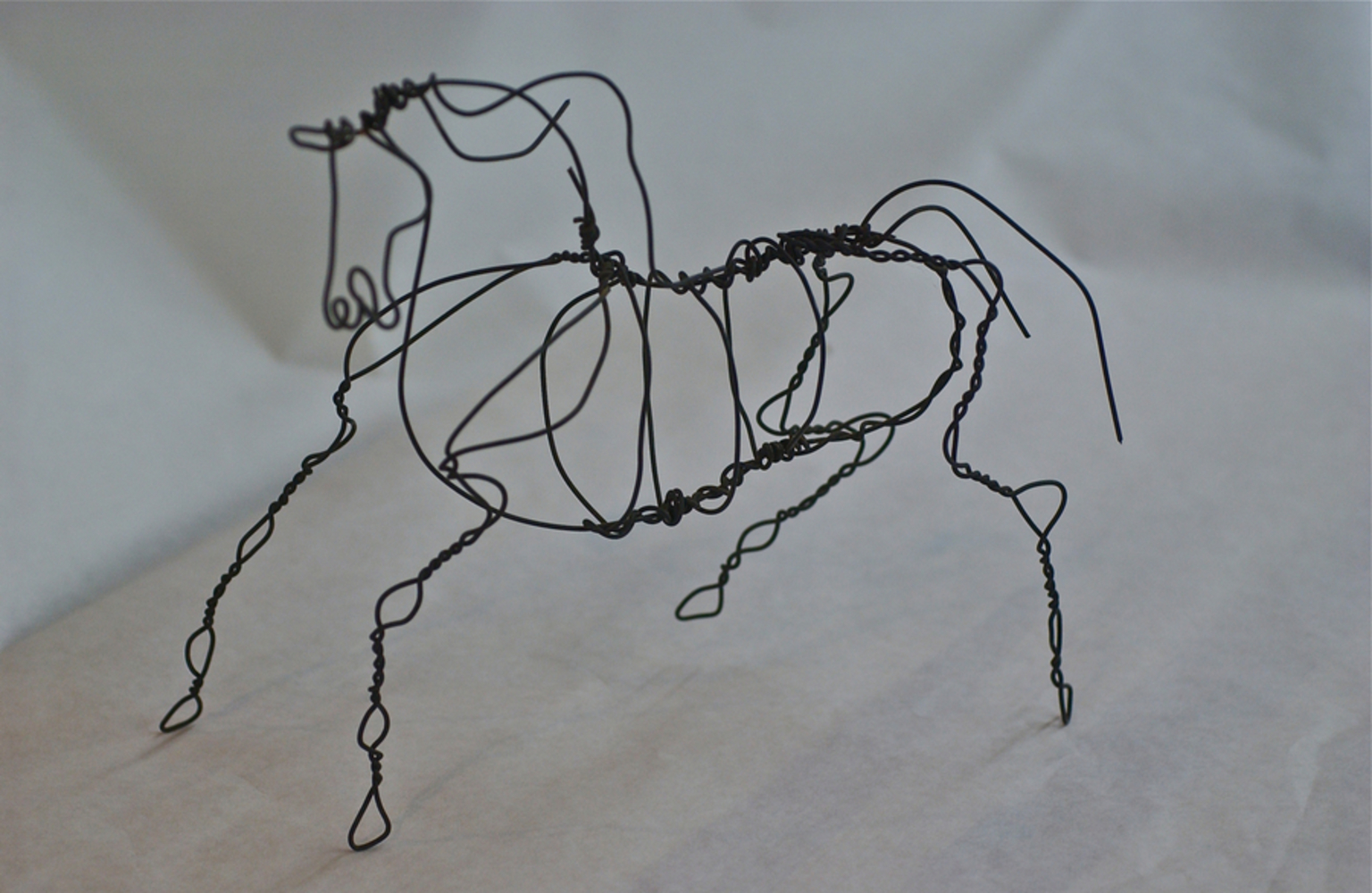 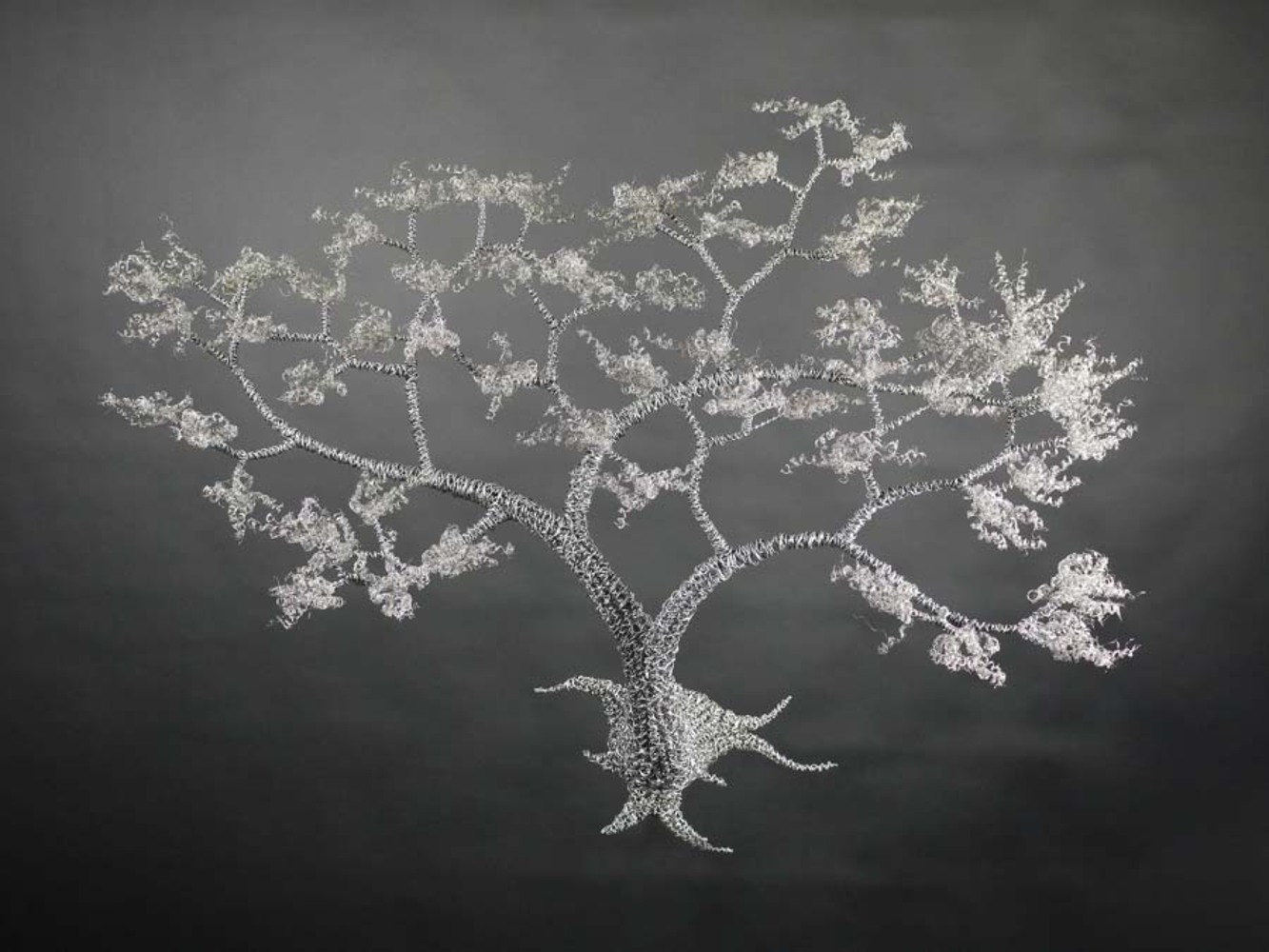 Like most digital media installations, the work had two sides - a technical side and a physical side. For the physical side, the scale of the tree had to be determined rather early on. For where we wanted to place the tree (the benches outside our classroom in Hunt), we needed it to only be 2-3ft tall so that those sitting around it could access it easily. We also had to decide how we should hold people's phones. For this, we made little wire holders on the branches which were closely aligned with where the charging cables were.

For the technical side, we had to decide how we wanted to play the media and where we would put whatever was playing the media. We decided to use a laptop that would be placed alongside the tree, hidden under a box with the two lightning cables coming out. The sounds would come from the speakers of the laptop. The laptop would run a Python script to play the ambient noise at all times and a randomly selected bird sound (with a new one layering on every 15-30 seconds) when devices are plugged in.

As for iterations on the work and ideas we rejected: we originally thought we would have more charging cables on the tree. However, the tree became too crowded, and they would have to be charged from something other than the laptop (limited amount of USB ports) so that would complicate our setup without adding much more interactivity. Also, we originally had the phone holders start out as empty, but realized their use would not stand out enough and added foam cutout labels.

The outcome was a tree made of steel wire, which was wrapped with two lighting charging cables. These charging cables were plugged into a computer which ran a script that played the sounds of trees rustling at all times. When a phone was plugged in, bird calls would be played in addition to the rustling, with more types being layered on over time. The sound we chose of the tree rustling was generic, while the bird calls were carefully chosen. The wire tree was made to look like the symbolic tree of life with a thick trunk and generous, far-reaching branches. The wire we used for this tree was oiled over so appeared black, which intentionally contrasted greatly against the white lightning cables. There were two designated spots on the tree for people to rest their phones as they charged, which were labeled for clarity. The lightning ends of the cable were also around there so that it would be easy to plug in. It was installed between studios A and B in Hunt Library, where people commonly sit to relax when they have down time.

We have managed to make the wire tree go beyond a fine art work through elevating its practicability. The function of charging people’s phones encourages viewers’ participation. Kwastek explained that the viewers’ action is the key to performance projects. Likewise, even if viewers decide not to use the wire tree, their decision is also a reaction initiated by our installation piece which could be considered as another form of interaction. We improved the rough draft through coiling the base part onto the benches so that the tree becomes technically more stable and actively integrates into the environment. Unlike the base, the branches are vulnerable which is, in fact, an implication of nature’s current situation under the impact of technology. The bench is a good location for people could sit aside and do their stuff while their phone are being charged. Though it generally performs our intent, the wire tree could hold fewer phones than we expected because of its fragile structure.

The main problems are that the structure is unstable and the phone spots are not fixed. We would do a piece of a larger scale to have better phone placement. Basically, the major strand should consist of more wires and the wires should form flat planes to hold the phones more steadily. The nature of material really matters for an installation piece. Some material could arouse an amazing artistic effect even if the form is rather simplistic. What’s more, the projector is a great tool for its interaction with the original material could magnify the intended effect. Generally speaking, it’s really important to build a close connection between the installation piece with the environment through, for instance, making the work a coherent extension of the environment.

I believe it is important to consider about what people would usually do at a particular site in order to promote viewers' participation. Choosing an inappropriate location may inhibit interaction. For instance, people may walk by without paying attention to the wire tree if it is put in the corner or the quiet study area. The scale of the installation piece also really matters and in general large-scaled works look better. Light, sound and projector are effective tools in the aspect of augmenting the effect if the scale is not big enough. A successful installation piece should integrate into the physical environment. Also, pragmatically, we need to be able to adjust to unexpected conditions. Things went relatively smoothly, but after we finished the tree, we found out that our original plan of having 6 charging cables couldn't really be realised, so we cut down the size and used only 2. Instead, we chose to layer the bird sounds with just 2 charging cables.

We decided to use lightning cables for charging iPhones to create a flower pot. There will also be metal wires to support the charging cables. There will be a rigid metal pole in the middle to provide more structure to the "plant." The interactive component will be for people to plug in their phones to recharge, and the user gets feedback by hearing noises coming from the laptop (inside the "flower pot") when they plug the phone in. The sound will be either light music or ambient noises. We want to put it somewhere where many people will see it and stop by to check it out. One potential location is at the bottom of the stairwell, but the installation is really portable to anywhere with an outlet. 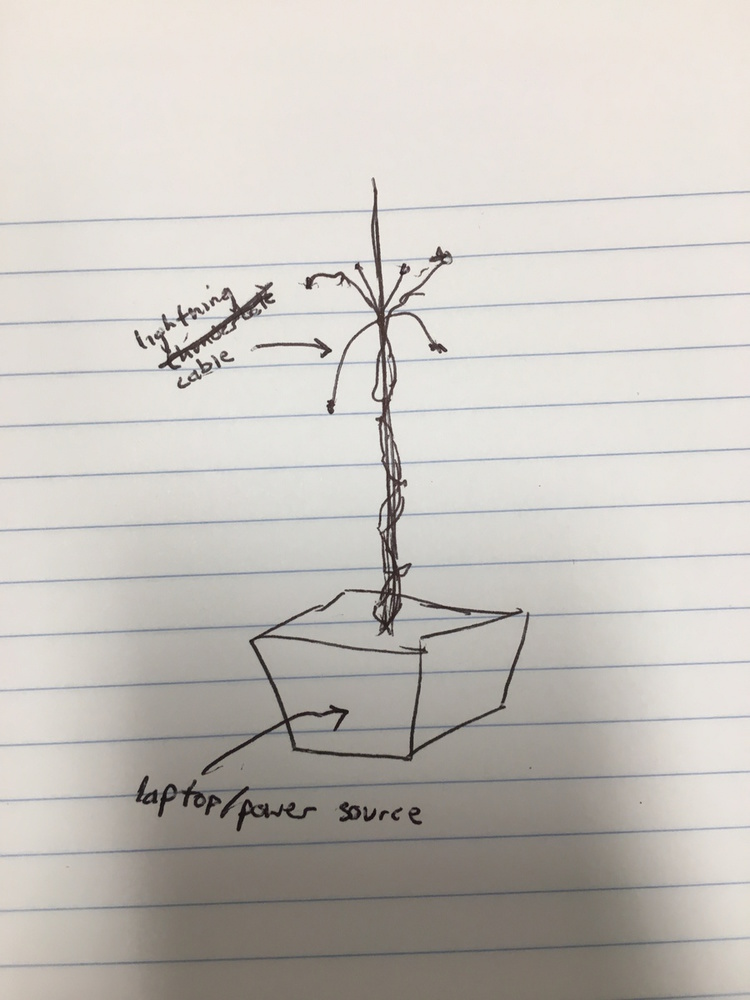 6 comments · Latest by Stephen He

I really enjoyed reading about how and why you came up with this project! I think the final result is a great iteration on the original idea- it shows clear signs of development and revisions.

I would have liked more information on the exact methods of creating your tree. For instance, how did you shape the wires? How did you collect the wires together?

I think your project is a great combination of nature and technology. Not only is it functional (like tech), but it is also pretty (like nature). Congrats!

We created a wire tree which people could charge their phones on, and would play bird calls when people plugged in.