This project changes light colors based on movement within a stairwell. It deals with reflective/non-reflective surfaces that further manipulate the overall effect of the light in the stairwell area, creating an other-worldly experience.

Video of people interacting with the installation 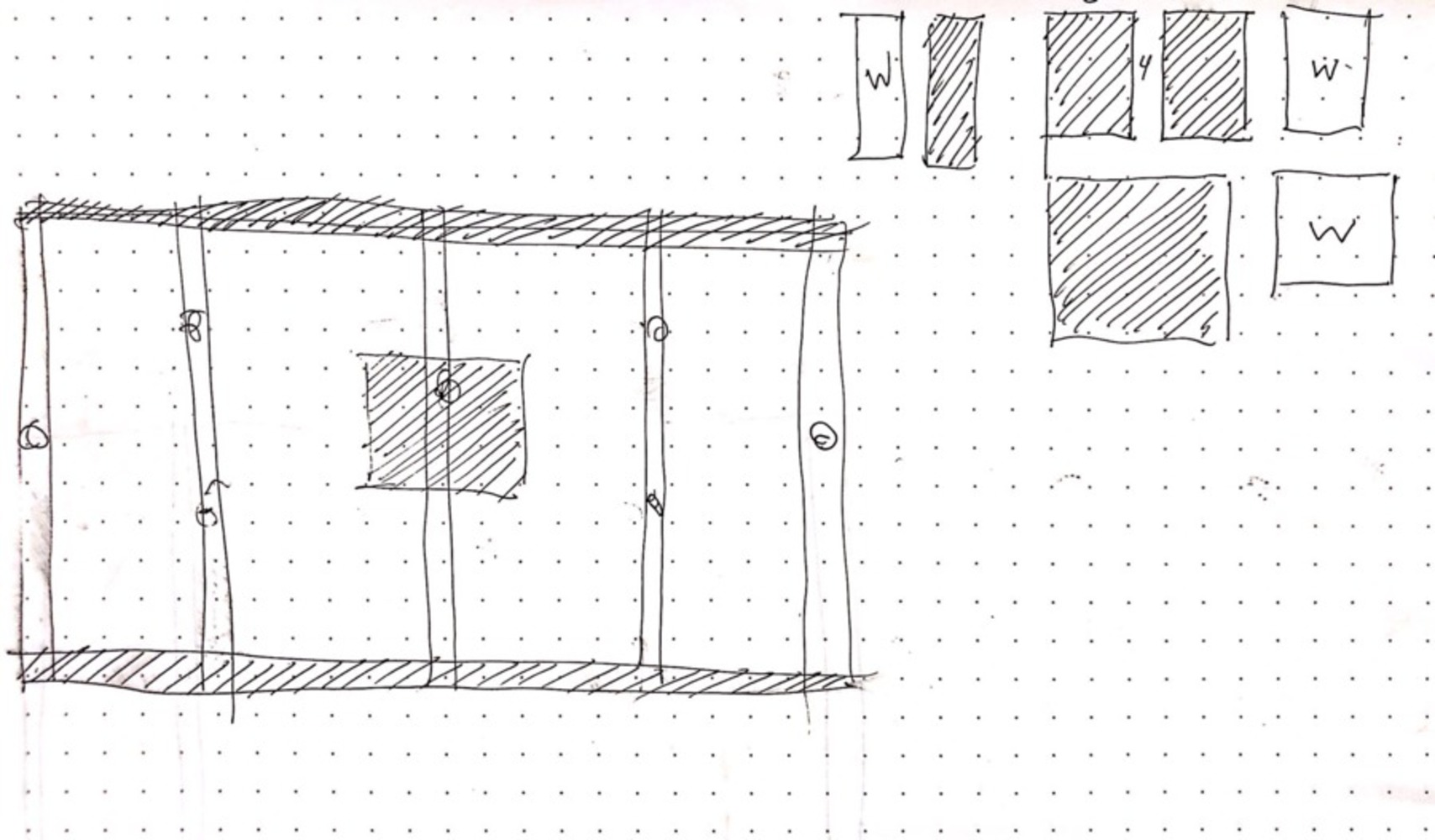 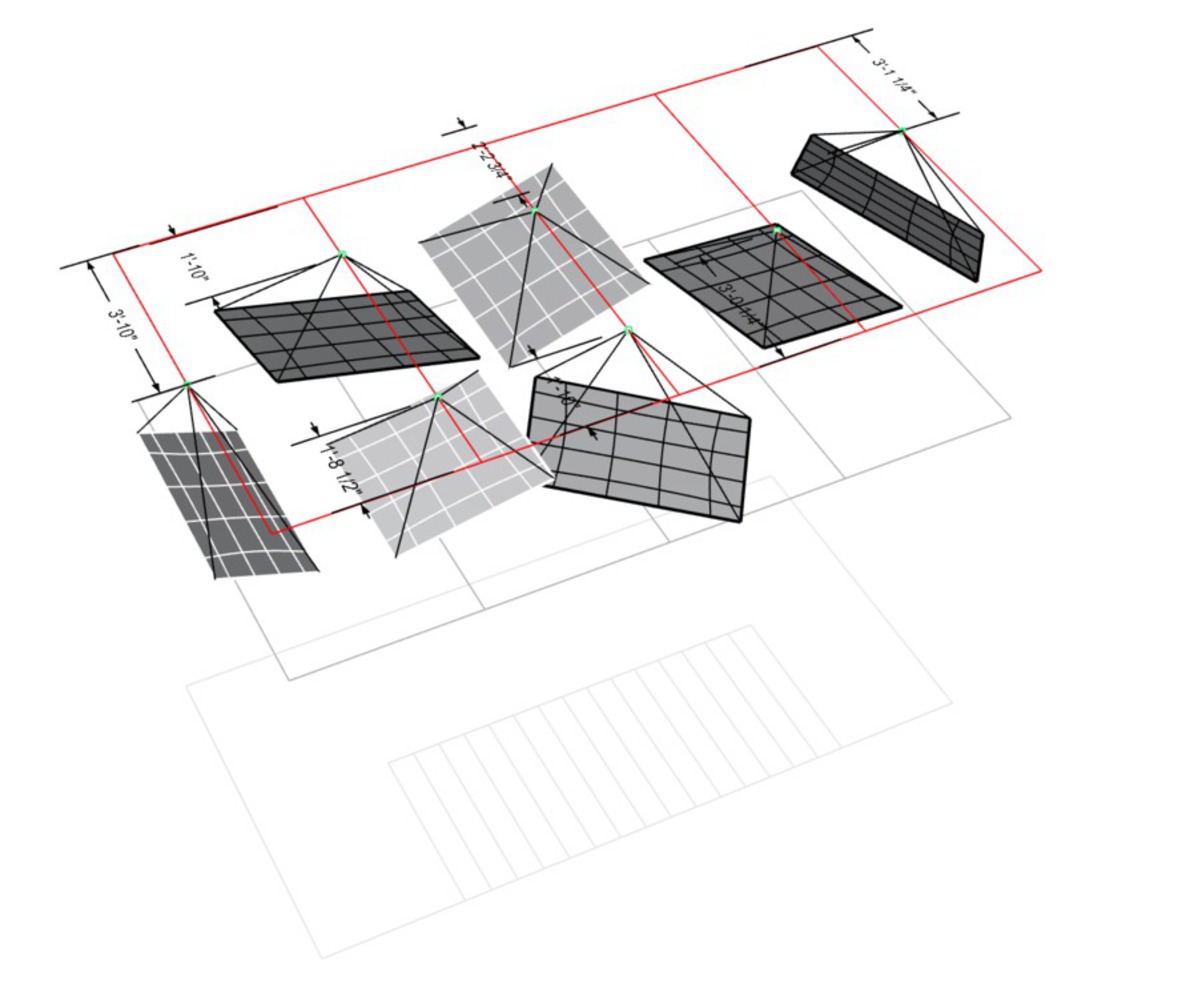 Lights, Camera, Action is exactly about those three things. We created a manipulated the entryway space by dropping down and exploding the ceiling with mylar and scrim-covered square and rectangular panels. We brought visitors into our project by allowing their movement to affect the light color, and used our planes to reflect and diffuse our dynamic DMX lighting, creating a changing textured light environment to set the mood for the rest of the studio. Using movement to affect our installation made sense given the nature of the space as an entry point - in order to enter the building, people must walk through this space.

We first had to think about how to hold up our panels. Our biggest issue was finding a way hover panels over the staircase, since the tall ceiling height meant that no one could reach the ceiling while standing, and no one could reach far enough over the staircase to place our panels where we needed them, even while standing on a ladder. Our solution, after thinking of a series of failed ideas, ended up being a lightweight metal frame with cross bracing spaced at the intervals we wanted our panels to hang from. The frame itself was about 20 feet long and 10 feet wide, allowing it to hover over a satisfactory amount of the space's floor area, meaning that we could spread our panels through the entire space. We secured this frame at its four corners by drilling into the left and right (long) walls of the space. First it was constructed on the ground with the studs vertical and then flipped horizontally to rest on the stairwell railings, and finally, lifted up to a little over 10'.

Unistrut channels, generous duct tape, and non-invasive mounting arms were used to hold up the lights around the perimeter of the room. The most challenging part wasn't wrapping the materials carefully around the PVC frames but rather, figuring out how to cut the fishing line to angle the pieces as intentionally as possible. We used silver carabiner clips to attach the 4 individual strands of fishing line coming from each of the four corners to anchor into a 5/16" hole in the metal framing.

We then worked with the DMX lights themselves, continuing to tweak our reflections and diffusions in order to light up the entire space while still ensuring that spots of interest were created to break down the space. These spots ended up being the focus of most photoshoots in the stairwell.

A webcam which was mounted at the back wall, above the black couch, tracked blob movement near the top of the stairwell. With increased detected activity, TouchDesigner would trigger the lighting to grow increasingly magenta and with the most blob movements, changed to red. With no detected movement the environment was rendered to a blue-indigo.

We experimented with various color slider speeds, and found that a faster change rate allowed for people walking through the space to immediately notice the change in color, and look up as they walk down. This created a connection between the space and the people moving through it, encouraging people to stop and pay attention, and inviting people to play with the light changes.

We found blob detection a bit too complex and finicky for our application, so we opted for a much simpler approach—we create a five frame buffer and compared the difference between the first and last grayscale images. The bigger the difference between the two images, the higher the number of white pixels. We used the percentage of white pixels in the resulting image to compute a number that would control the phase of a gradient ramp. The the more white pixels, the more motion, the higher the ramp shifted toward red.

Here is a link to our TouchDesigner file: https://cmu.box.com/s/kmmqwe2gr25yi8iixizsvoc0abyn19da 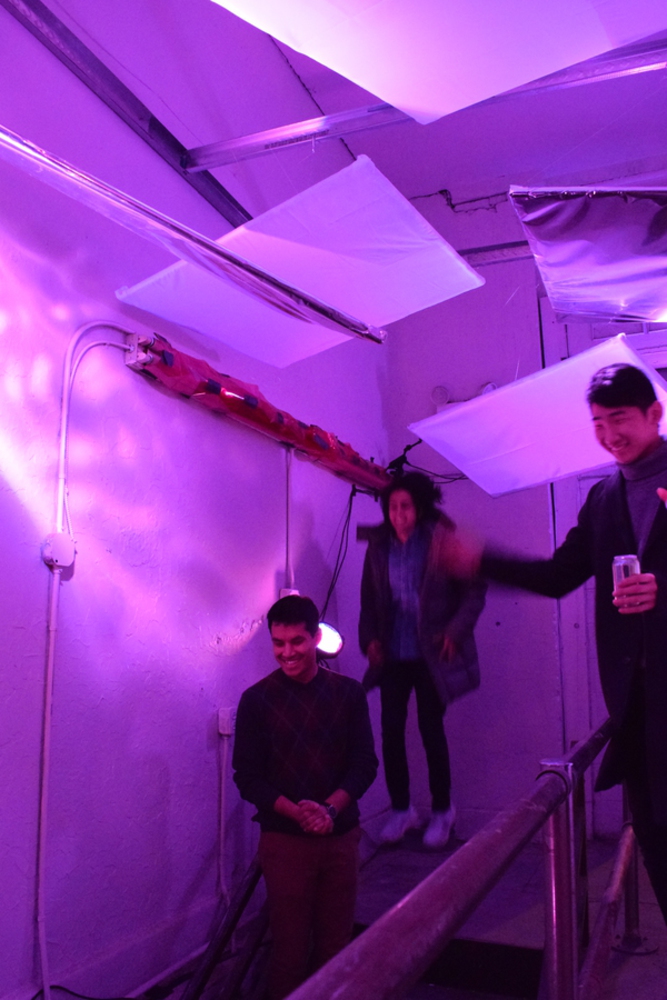 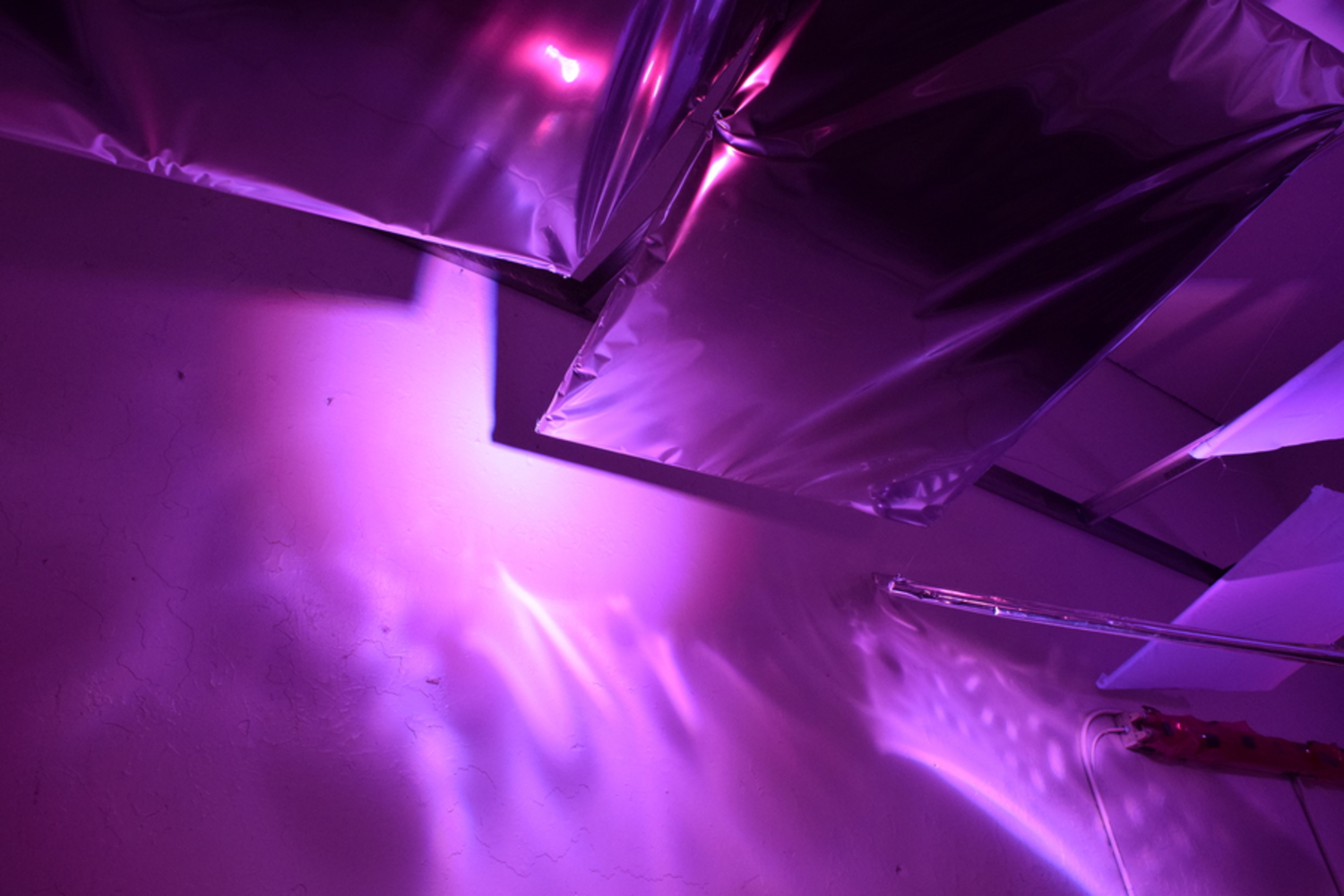 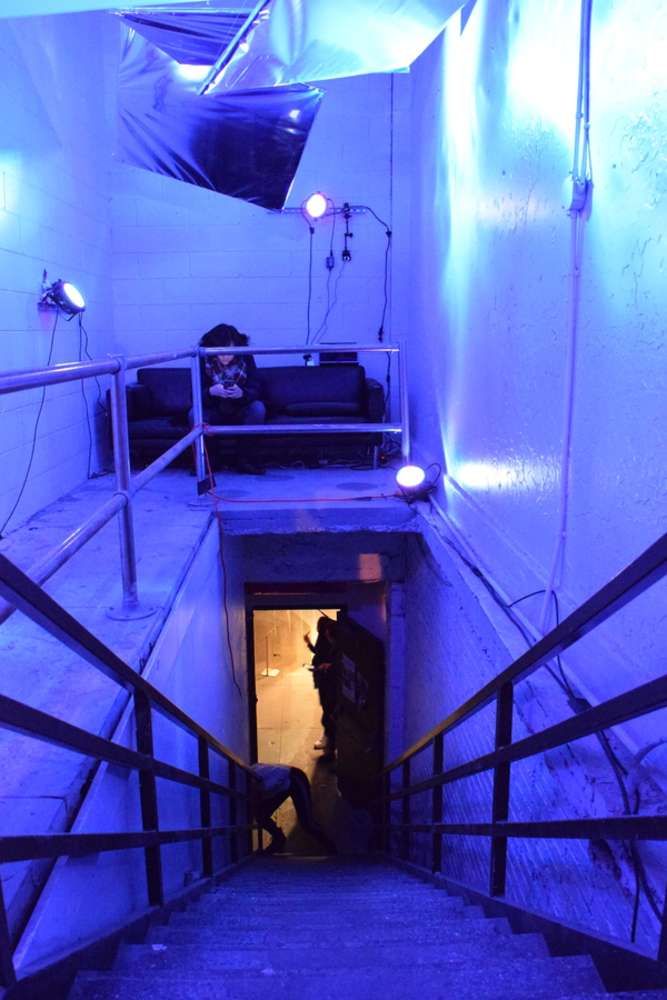 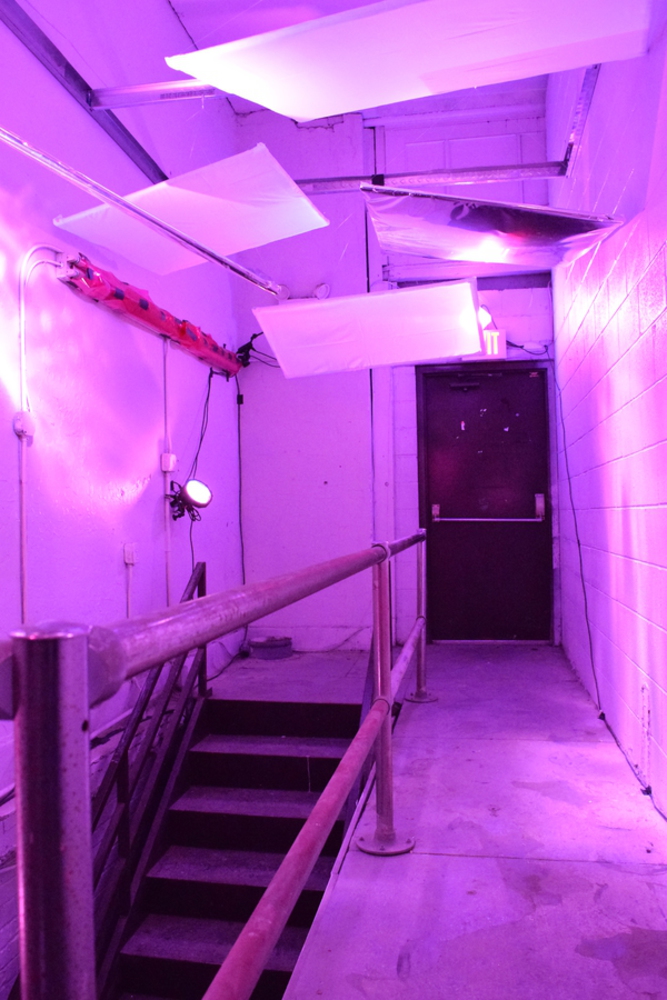 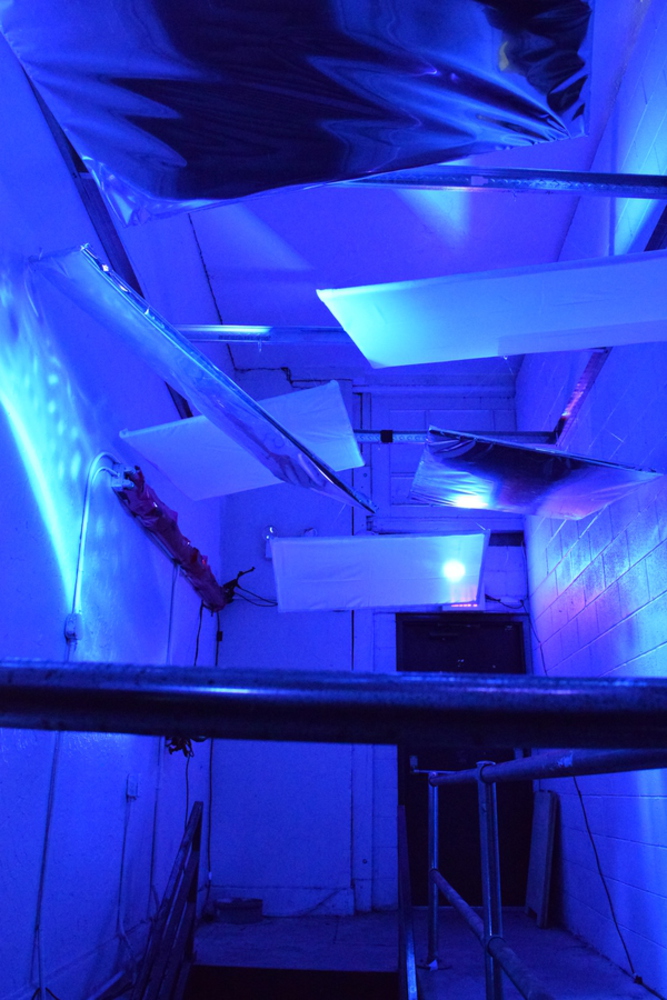 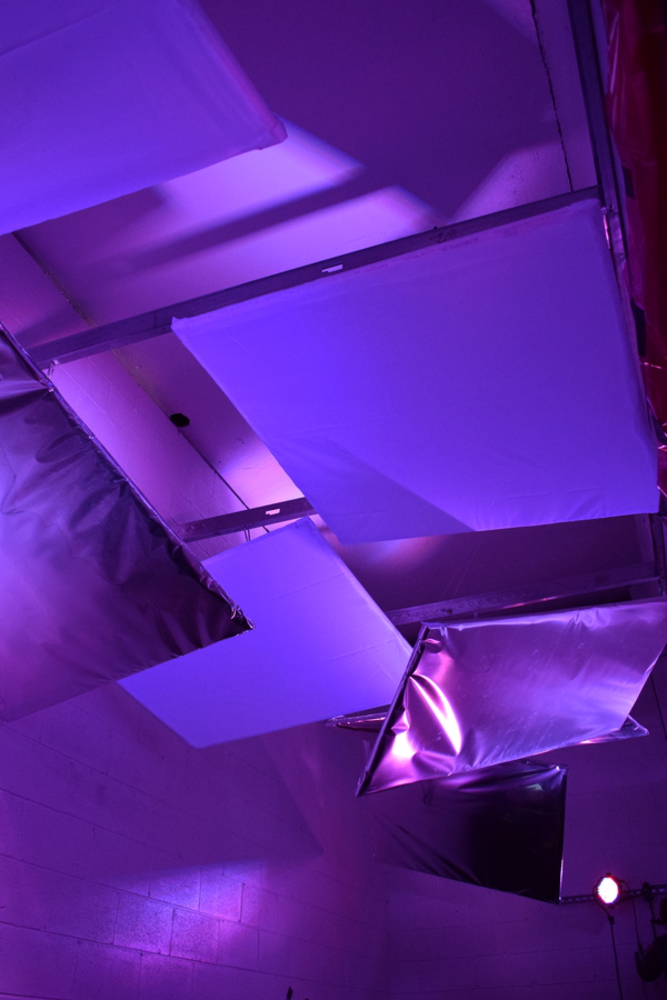 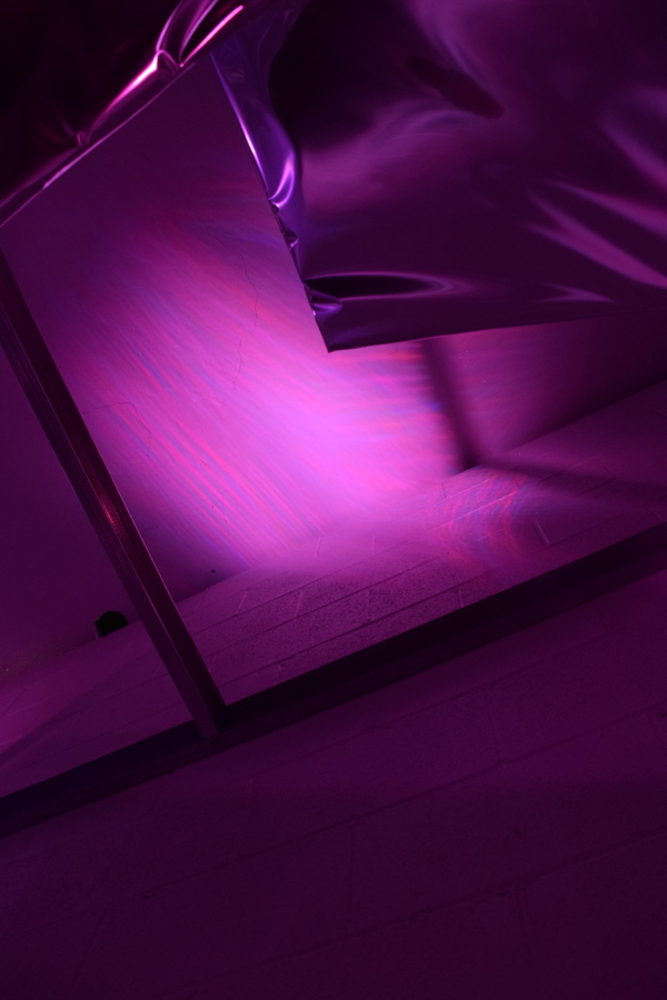 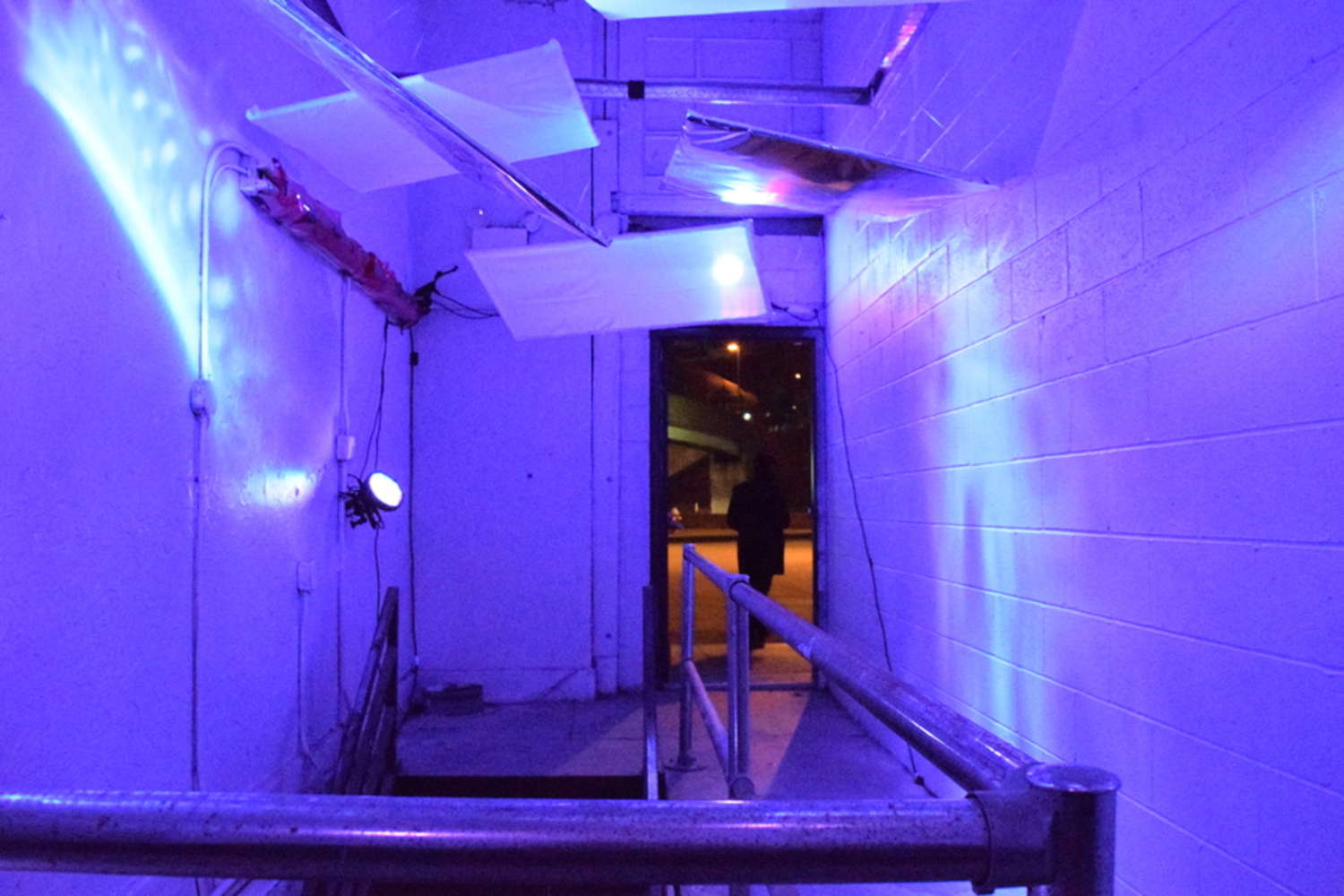 This project changes light colors based on movement within a stairwell. It deals with reflective/non-reflective surfaces that further manipulate the overall effect of the light in the stairwell area, creating an other-worldly experience.