Made by Emily deGrandpre, Amy Luo and faristiz

Allow user to forget negative aspects of a memory.

Memory Island is a zen-garden inspired landscape for a forgetting ritual to nurture both a plant’s growth as well as one’s own growth from a difficult experience. A handwritten note recounting the negative memory is first slipped into the box. The device analyzes the memory and digitally projects the words over the leaves of the plant in the center. As the plants grows, the user can selectively delete words by trimming away the corresponding leaf. Eventually, the user will be left with a new memory, pruned of its negative aspects.

This ritual prompts a state of introspection and self reflection by allowing the user to actively engage with their memory in a calming, reflective environment. The incorporation of water is symbolic of renewal and cleansing. As the user waters the plant, it suggests the washing away of the old memory as well as the creation of new life. Similarly, pruning incorporates the cutting of dead or overgrown branches in order to increase fruitfulness and growth. Our project seeks to portray forgetting as the process of pruning and rewiring a memory into a more positive experience, so we may overcome and grow from our past. 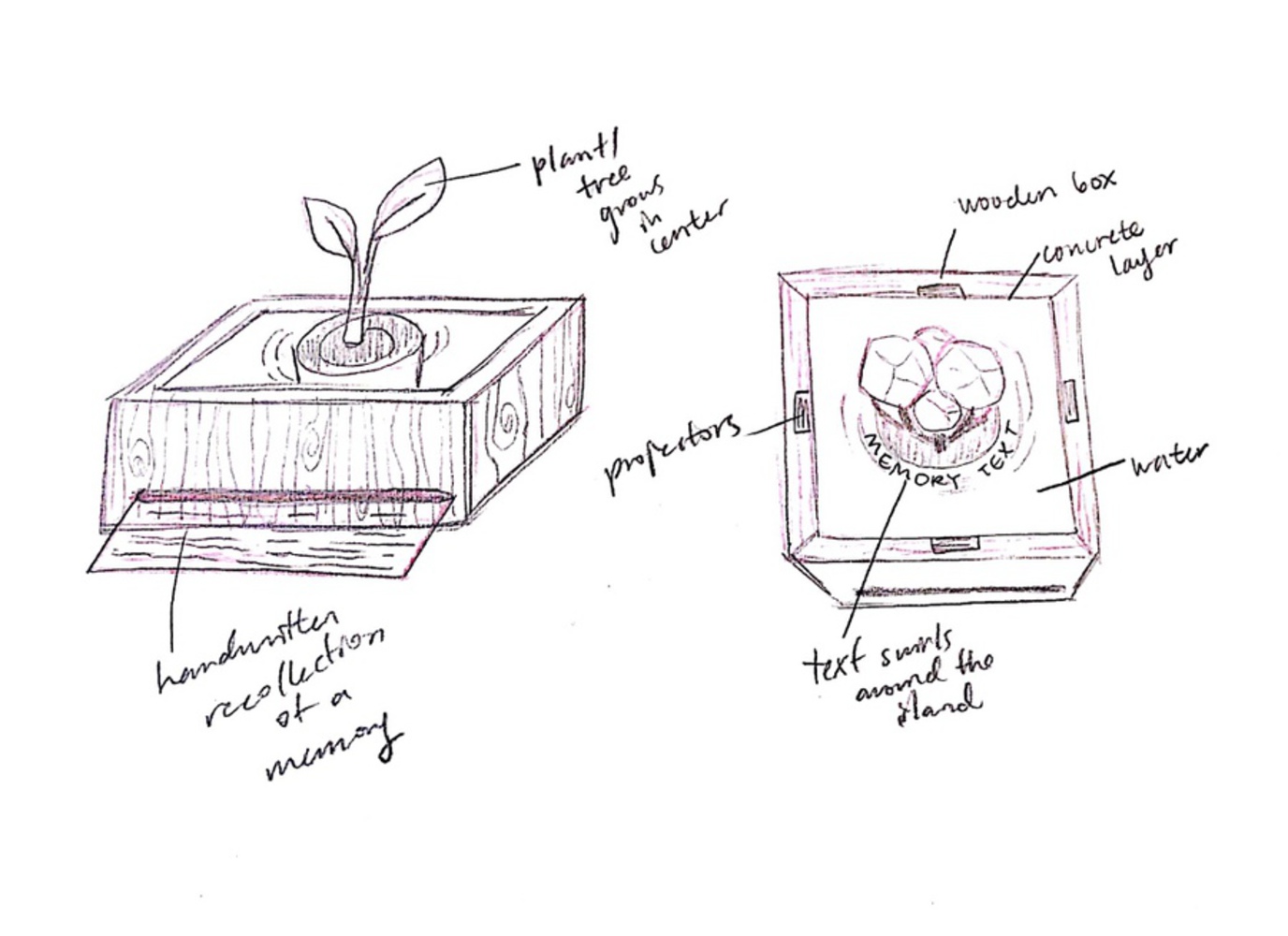 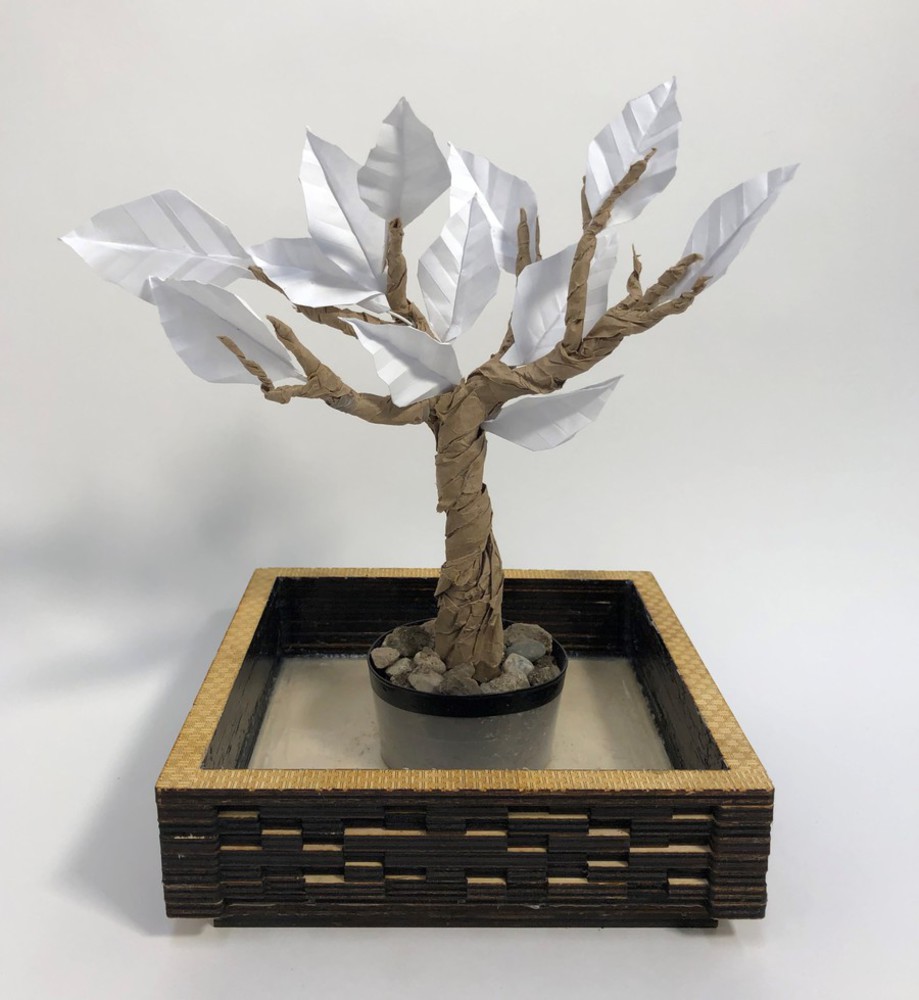 Mold-able wires were used for the inner frame of the tree, and brown paper bag material was used for the outer wrapping. The paper leaves were folded, with the same wiring used for the stem.

Processing code was used to create the interactive text interface. To simulate the act of a specific chunk of text disappearing in response to trimming a leaf, the program creates a grid overlay and draws a white circle to conceal the selected text cell. 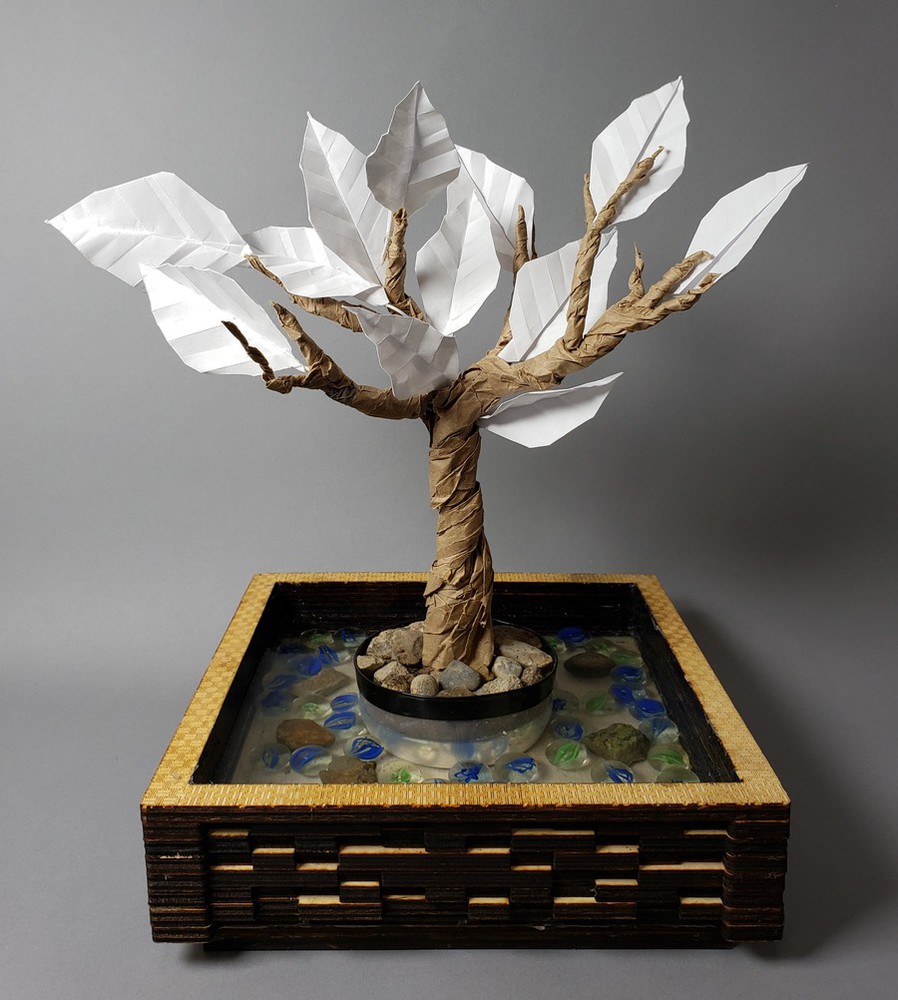 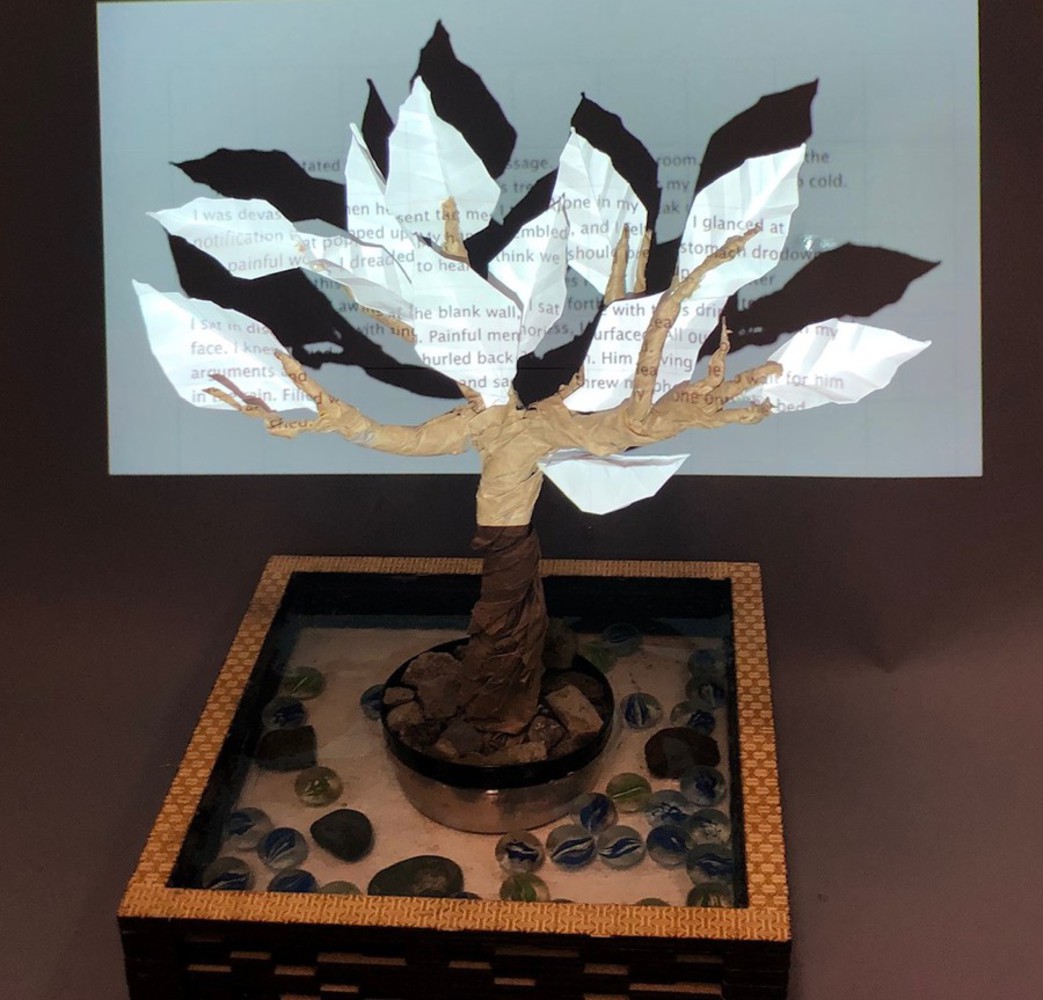 Prior projects which influenced our design include The Laboratory for Forgetting, a participatory art piece by Naoko Wowsugi engaging people in “photography therapy”. The participant takes pictures of things they wish to forget, before burying and digging the film out of the ground again to be developed. However, by this point the image has been degraded from fading and saturation. The installation displays all the photos in a gallery, showcasing both what is lost as well as well as what art has been created as a result of forgetting.

This work was influential for our own group project because we also sought to incorporate the idea of natural and visible decay of a memory over time. This installation actively invites people to share bad memories but in an altered state. It’s through this ritual that people can interact with their image, and transform it into something new and artistic. It’s reflective of the reconstructive nature of our own memory. We made use of similar visual and natural elements like plants and earth to reflect the healing process. In addition, we focused on the concept of transformation, using the passage of time and physical destruction of a visualized memory to portray forgetting. 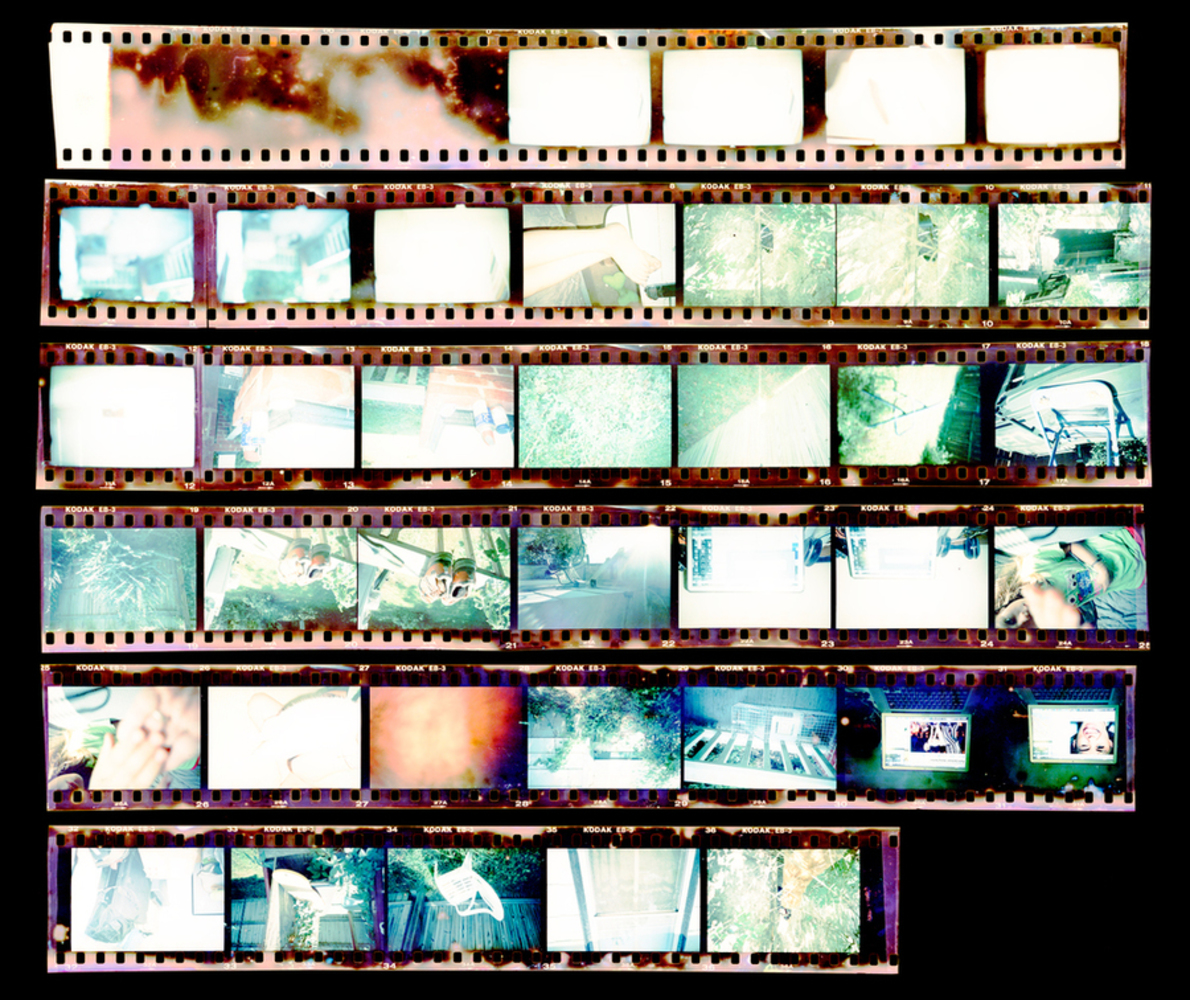 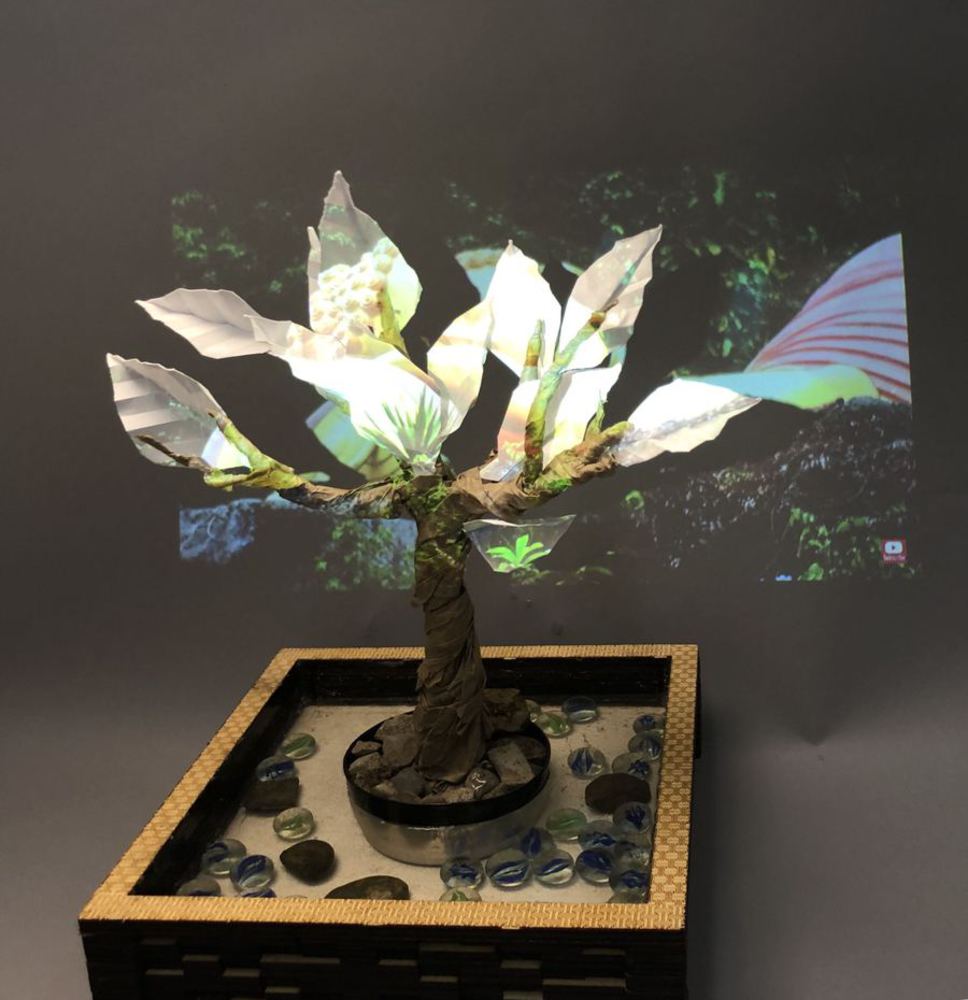 When we were brainstorming concepts for this investigation, we were captivated by the idea of forgetting negative experiences through the elimination or reassociation of the underlying contextual information and we started looking for ways that we could materialize this idea in a medium that would be enticing to people. We wanted the ritual to feel personal and to be conducive to reflection such that people going through a bad experience would use this as a form of healing. Several designs were discussed such as a pendant or necklace, a waterfall with a projected image of a bad experience, or a treasure box that would act as a storage for negative experiences that would be transformed over time into more neutral or positive memories. In the end, we decided on a bonsai-inspired theme because we wanted our project to allow the person a more physical way of editing/curating their memory of an experience and we wanted a design that would grow with the user's healing process into a product that would be unique for each experience.

The casing we made was designed to organically meld with the theme and reverberate with the solemnity of the ritual. This is one of the reasons why we chose the Japanese pattern engraving on the top of the case. We felt that this particular pattern fit the mood of the reflective process because, while ornate, it wasn't overly whimsical or presumptuous. The dark hue of the laser cut wooden edges also gave the build a serious tone which we hoped would resonate with the person's emotional state at the start of the ritual and would make it easier for them to interact with the build.

The physical design of our tree prop went through several phases. At first, we considered 3D printing the tree, but we figured it would be difficult to prune a 3d printed branch. So, instead, we considered building the tree out of LEGO. However, we quickly came up with a better alternative which was to build the tree out of paper bag material. In the building process we discovered that in order to extend the length of the branches to form a more realistic tree, we would need to add some internal support. We found moldable wire could be used as the internal framework for the tree and that we could easily wrap the paper bag material around it. It also provided the method for securely anchoring the tree to the molding foam we embedded in the soil.

One of the questions which should be addressed in later iterations of our design is, what happens to the written experience once the healing process has concluded. Does the device reprint the experience as redacted by the user or does the device destroy the written input? Another question we had was, should the curating process be only subtractive or could the user be allowed to add to the memory of the experience. The current state of the concept is purely subtractive with pruning as the ritual for eliminating parts of a memory.

The biggest challenge to this design is technical. If we were to pursue a working product from this concept it would prove difficult to implement some of its features such as visual recognition of handwritten input to computer text and projection mapping unto the leaves of a tree. There may be other embodiments of this concept that could prove easier to implement such as, instead of written input, the user could type their experience in an app that would connect to the device. The tree could also be replaced by some sort of connected block system on a wall that could be modified by the user. In fact, we could create a virtual tree that the user could interact with via motion controls. This would allow more control over aspects such as the growth rate of the tree that could prove more expressive of the state of the user at the cost of losing the physical interaction.

We found it challenging to integrate our technology as seamlessly and as functionally as we would have liked to have it. Projection can be done so many different ways and we chose to do it in a very straightforward, no edits, kind of way. One of the members in our group wanted to use a leap motion but with the time we had available we didn't know how feasible it would be and we also didn't know exactly how the interaction would happen. We sort of hacked two concepts together (the processing code and the tree idea) without having enough thought behind how the ritual could work in a non-futuristic scenario. The projection was a limited display of the types of interaction that could be possible with this tree. Given we got a little caught up in the details of how the tree display would look, we had trouble melding the experience of the analog and the digital. Going forward, if we could identify which piece of technology could help us get closest to our ideals and we spent time doing this first, it could help push out a stronger, more integrated concept.

Allow user to forget negative aspects of a memory.