Honestly I didn't really intend on doing anything profound or really thought-provoking - this week I thought I'd just have some fun with the project and just spontaneously decided to draw some (50+) frames for a music video. Since school life is really busy and I often don't have the time to enjoy my hobbies, anytime we get a free-topic assignment I grab the chance to work on subjects I'm interested in, even as I feel like engaging in personal shenanigans should really be kept to more private projects. This week's spontaneous idea is Undertale-related (because of course it is), using the characters Alphys and Mettaton (Happstablook?) and inserting them into "Popular" from the Wicked play.

The relationship between Alphys and Mettaton seems to be one of the more tenuous ones in Undertale and we don't really get to seem them at their best with each other, but I imagine they got along well enough prior to the start of the game, and for various reasons it seemed like it would fit the song pretty well, so. I thought it might be fun to express some headcanons by retelling it with the Wicked soundtrack. It's not serious at all, so I don't actually have much to say on the retelling, except that I wanted to have fun with it. Always grab that chance when the assignment encourages it.

Started by drafting a thumbnail of each frame on paper. Then I drafted the frames in photoshop on separate layers. And then I did the lineart for each layer on another layer. And then used the photoshop script to export each layer as a JPEG image into a folder, and used iMovie to line the images up and add the audio. Then I watched the video multiple times, adjusting the timings, took note of edits to make (extra-bad lineart, forgotten details, other frames to add in, etc) and made those edits again in photoshop. Also used Audacity to modify the audio somewhat before putting the final pieces together again. Rewatched the video a few more times, made more edits to the timings, and finally uploaded it to YouTube. I hope the video doesn't get struck down for the audio before the assignment date is over.

0
sketch of a frame from the video 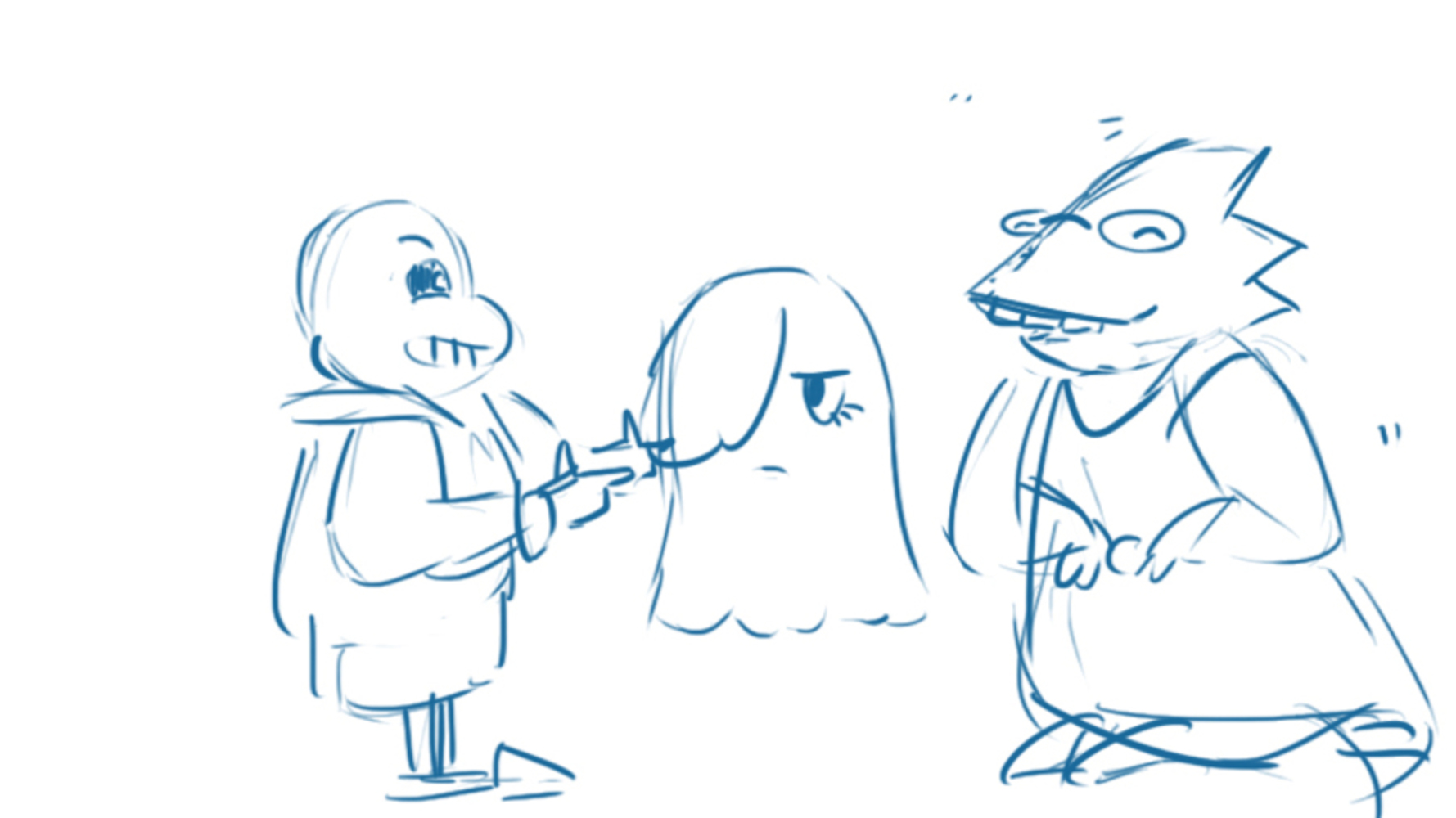 When you draw 50+ images, there's going to be some that look alright and some that are pretty poor. I think this one has a relatively even mix of acceptable and unacceptable frames, considering the amount of time I had to do this this weekend, and the scope of the project.

The most obvious problem with the video is that I didn't actually plan it out very well - I just sketched thumbnail ideas while listening to the song on repeat. This means that sometimes you have more or less frames than you should for a particular sequence, and it really shows - At the start, more frames would have been better. And there are so many frames at the end you can barely keep up on your first play. It's tough, since I wanted every line to have its own accompanying picture, but the depth and complexity of the lyrics can really change on you. Or at least the content gets denser, but the visuals can't keep up at an equal pace. So, definitely plenty of room for improvement here.

The process was already pretty efficient, especially considering that I found out about the layers-to-jpeg script in photoshop, but if I had to change something I guess it'd be the planning stage. As explained above, that probably would have made the whole thing go smoother, and the video play better too.

Nicked the song from here: https://www.youtube.com/watch?v=y_uM8bUnlGQ

I thought your animation was very entertaining to watch. I've never played Undertale, but I can tell their personalities from the video. Because I have to give something as a revision, there were a few frames that went by too quickly, so I didn't get to see what it was (at the "talk to boys" @~1:10 part), but overall it was a great project and I enjoyed watching it :)