These household lights remind one to pause and reflect

Remembrance Candles bring a symbol of worship to the home. These 31 led candles evoke the imagery of the religious votive candle, and encourage the user to remember special days. These could be holidays and other mundane events. However, the intention is to focus on days the user has a deep emotional tie to: anniversaries of marriage, birth, or death. When placed near the entrance of the home, these candles remind  users before they leave and when they return home, letting them reflect on these noteworthy events and how things have changed.

Remembrance Candles is powered by LED Tea candles powered by a 5v wall outlet power converter, which passes through a toggle switch mounted under the candle. By pushing down on the light, the switch either allows power to flow into the LED or not, making the candles themselves the buttons that are pressed. an onboard Particle Photon acting as a calendar and a programmable LED strip beneath the candles show which candle represents the current day, and allows users to save candle configurations by month for a minimal transition.

The 31 candles are arranged on 3 rows, going 10 - 11- 10. This deliberately shies away from the weekly unit, instead focusing on the approach of days of reflection, and their number in the current month. This also discourages users from displaying mundane events to heighten the importance of those events that are displayed.

This device could possess an optional digital interface/app  that connects to a digital picture frame, displaying images related to the circumstance that one wishes to remember. However, that would require more input on the user's end, and in order to streamline the user experience and minimize the work they'd have to put in at a minimum for the device to function (after all, the less intrusive the device, the more likely a user is to integrate it into their daily routine). 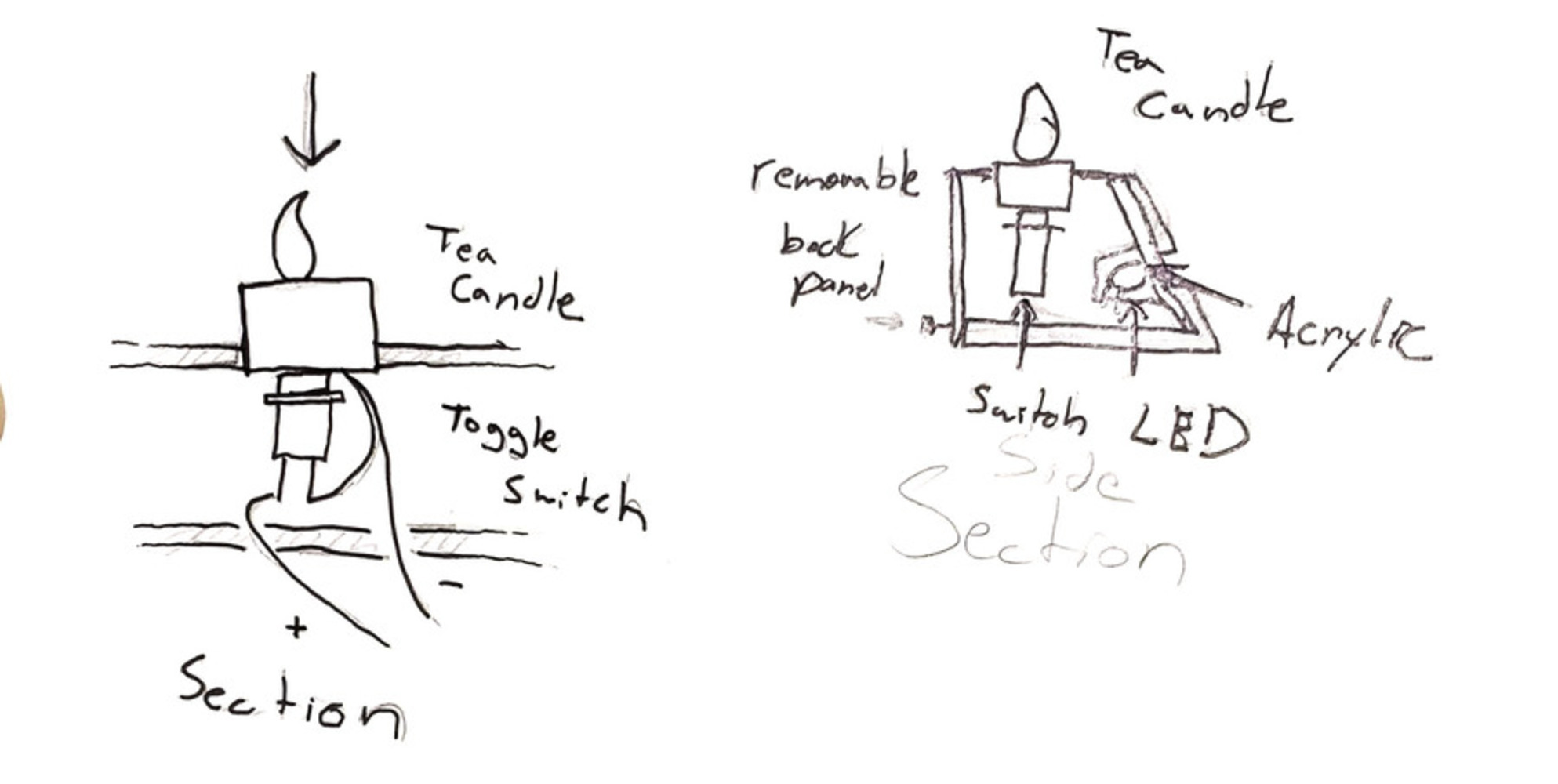 The idea was overly ambitious for a prototype, so the design was cut down to ten tea candles. Additionally, only the physical circuit was modeled. Any additional digital interfacing was purely speculated at. The body was CADded up in Rhino based on caliper measurements. The back was left open to access and maintain the wiring, as fully gluing up a project only to find that you need to fix a loose wire or re-solder a connection is a mistake one only makes once. Soldering the candles proved tricky, as they were incredibly cheap and didn't have much in terms of contact to the battery. All candles were wired in parallel to a single coin cell battery.

Prototyping came with unforeseen challenges.  The length of wire running from the candle and the switch proved critical. If the wire was too short, then the candle would not sit flat. If it was too long, the wire would push the switch to the side. Of the ten candles, only two sat perfectly on the switch in a way that they could be toggled on and off. In the future, the button should probably press against a different part of the candle to ensure that the toggle mechanism works. These small candle offsets also meant that the top lid of the body would not sit nicely. The top could be forced into place and fit, but none of the candles could move. This stress also disconnected weak soldered connections, which needed to be fixed.

0
The lights at work

The act of lighting a candle in remembrance is one that goes back far into human history. As a child, I would see the votive candles in the back of the church I attended, and that formed the core inspiration for this project. However, people have done similar projects. The one that particularly comes to mind is Simone Giertz's Every Day Calendar, which uses light-up buttons representing the 365 days of a year to track a single activity. It too is a physical, visual object that exists in the home and users interact with it to track whatever they wish. It's an offline project, much like the original scope of my project, and I admire how it doesn't see a need to push people towards their goals other than acting as a reminder. Change comes from within.

The design process was straightforward. It started with the idea of ritual remembrance and lighting a candle as memory, and from there took the shape of the votive candle. The ideal end product would look strikingly similar to a rack of candles that could be found in a church. From there it was a process of scaling back for a prototype, going from 31 candles to 10, and developing an offline hardware that could function for demonstration purposes. 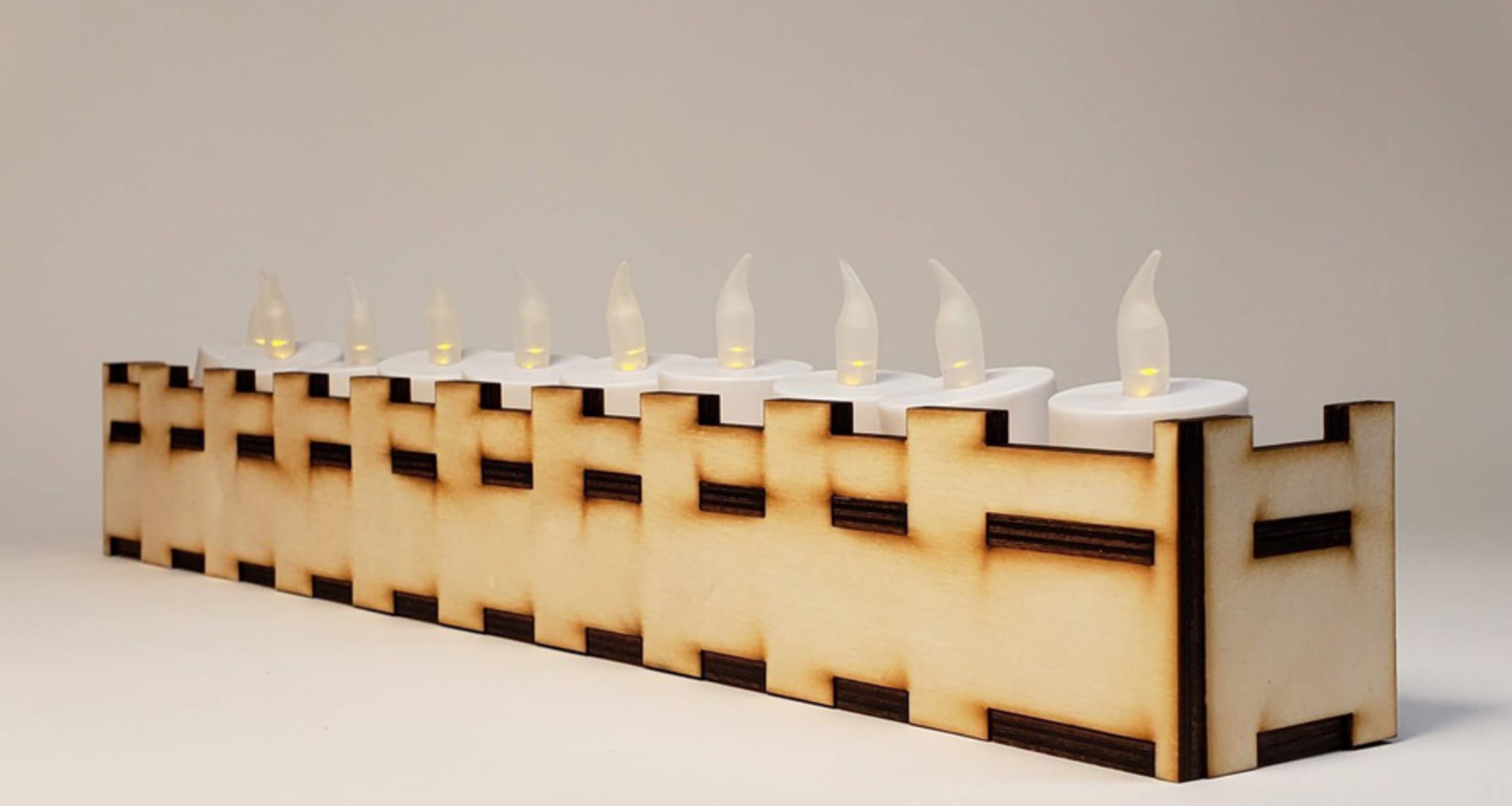 After presenting my work and getting my first bit of feedback, I see more options to think about. Votive candles are usually a community instrument, a way for a community of people to individually offer up their prayers. There's options for this project to move out of the home and become a community tool. Maybe you could add your own photos of those you want to remember and a digital picture frame would scroll through photos of those who are being prayed for.

The candles could also move out of the passive realm and into the active one, notifying users of remembrance days or otherwise provoking meditation and introspection. I personally don't like this idea as much as the act feels more hostile, where the act of peaceful memory shouldn't be forced as much, and overall it feels too prying. However, this doesn't discount it as a future option.

Moving on to the next unit, I think this question of sanctity should be remembered. Forgetting is an act that we should be mindful of. Why does the user want to forget? If it's something like grief, shouldn't we let them grieve in peace? It's something to keep in mind.

Project-wise, I never really considered any need for networked solutions and was very much about an unobtrusive, physical object. While I still prefer the project that way, I'll want to be more broad in terms of ideas going into a group project. If I were to continue with this project, I'd consider other options in terms of activation. Perhaps instead of toggle switches connecting the LEDs to a constant powered line, I could jank the wiring to a controllable LED strip, so that all the lights could be controlled through an Arduino and a single output instead of 31 individual lines.

Personally, I need to really loosen up on my tolerances. If the top cover was a large open channel instead of individual circles, it would have accommodated the unforeseen offsets. I also need to be more thoughtful in terms of time budgeting. I once thought I could do all 31 candles, but soldering just 10 was a drag and a couple hour investment. Because of that, I ended up with 26 spare tea candles (there's always a use for those) and about 30 spare toggle switches ( I could return about 20, but that's much more situational).

These household lights remind one to pause and reflect