Research I: In Order to Control

I critique Nota Bene's "In Order to Control."

At the Fiber Festival in the Netherlands in 2011, the Istanbul-based NOTA BENE installed an interactive digital experience with projection mapping and body scanning technology. As users walked atop the text of the installation In Order to Control,  they find that they are shaping a second projection onto the nearby wall, a shadow of text that silently follows the viewer through the exhibit, mirroring their every move. From the barrage of text arises a few simple words and phrases, letting the user shape the existing content.

The following is the full text used for the installation:

Man, in every era, is both the victim and the killer. How ironic…The dynamics are changing… The dynamics have changed…The most evil of this era have been chosen: Violence, virtuality, singularity. But for what purpose? The purpose is control, the purpose is control, the purpose is control. The criminal tool is violence, the criminal tool is virtuality, the criminal tool is singularity.Control triggers everything, control triggers anything. But who pulls the trigger?
As we’ve just said, man is both the victim and the killer. He pulls the trigger every time he admits control. How ironic…
This inflicts lots of pain. This inflicts lots of pain.How ironic… Violence is committed in order to control. Man is left alone in order to be controlled.They do anything they can so that you don’t think, so that you don’t question, so that you don’t get organized. So that you don’t unite.
What is it to be free? Are you free at all? Is it ‘being free’ to walk on the streets? Is the notion of ‘being free’ to be found in your walking on the streets? Are you free when you walk on the streets? Is it really necessary to find out the opposite of everything? To find comfort in your mind by crosschecking everything? But what about blurry logic?
Does the possibility of being imprisoned makes you free when you walk on the streets? Those in the prison are captive, those outside are free – is that it? That’s all about black and white – but what about the grey zone? 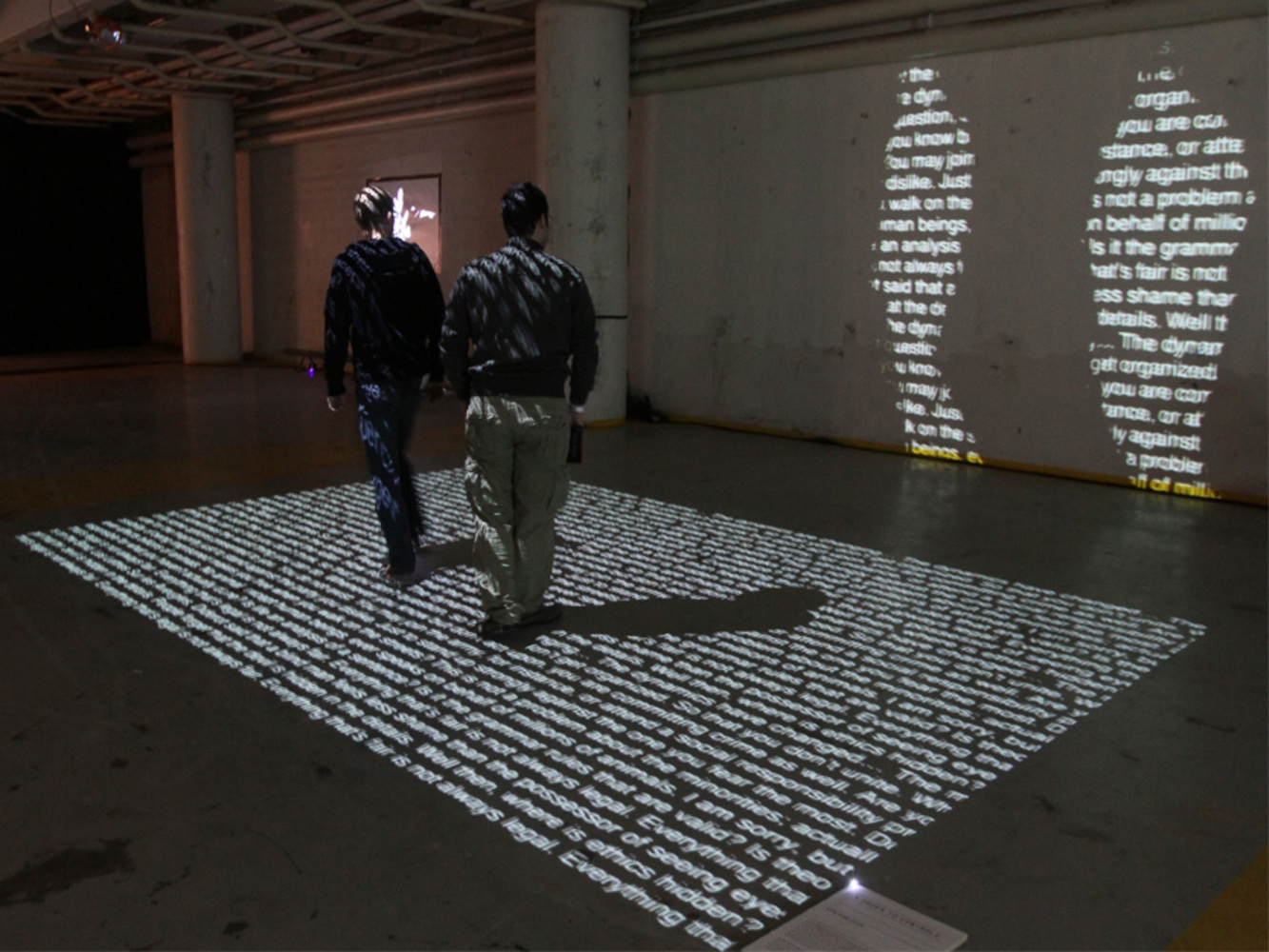 Is everyone, who isn’t condemned, good? For instance, are you a good person ‘just’ because you haven’t opposed the law?
To do nothing is sometimes the worst thing you can do. Whenever you know but don’t act upon, you are committing crime as well. Are you really the one to distinguish the moral from the immoral? Sign some papers to make others believe that you love someone, pay your taxes to legitimize the diamond you bought.Anything sold in the market is legal. They are legal, aren’t they? Have you used your deodorant spray today? Well then, who caused that ozone hole? You don’t need to shoot an arrow to drill the ozone layer. The missile you launch into the space won’t punch a hole either.
Isn’t it pretty ironic? You are indeed free as long as you obey the law, as long as you sleep. Do you think you are a moral person? If your actions are moral, do you have any definition on the threshold of morality? There exist only some options presented to you. You do not exist. You may join the army, for instance, or attend a social responsibility project. Would your choice to attend the social responsibility project in order not to join the army make your stature a more moral one? We are not looking for what is more moral? We are after what is essential moral? Control gives birth to violence, to virtuality, to singularity. Violence isn’t just about hitting someone; think about your country, your government. Violence isn’t just about hitting someone; think about your country, your government. The threshold model is just another control mechanism, that system is just another source for violence. Multi-party system, they call it, is there really a multi-party system? How many political parties are there to take the lead? Mostly, you vote for the majority just to stand against the party you dislike. Just to stand up strongly against the one you fear the most. Do you have any idea what that means? You accept the opposite group, you try to belong to a group yourself – do you know what that means? You become a soldier just to be a part of the majority. Do you think it really is necessary to join the army to become a soldier? You are becoming a soldier. You are becoming a soldier. Do you know what that means? Yes, you actually do, but you still settle for it. You become an associate. How ironic… How ironic… Is it ‘being free’ to walk on the streets? Is it really necessary to find out the opposite of everything? To find comfort in your mind by crosschecking everything? But what about blurry logic?
Does the possibility of being imprisoned makes you free when you walk on the streets? This is not a problem about the minorities; actually, this is a problem of majorities. Majority ventures to lose the detail; majority always forgets that the devil is hidden in that detail. It forgets how beautiful detail is. Or else, are you ignoring it? How ironic… How ironic… 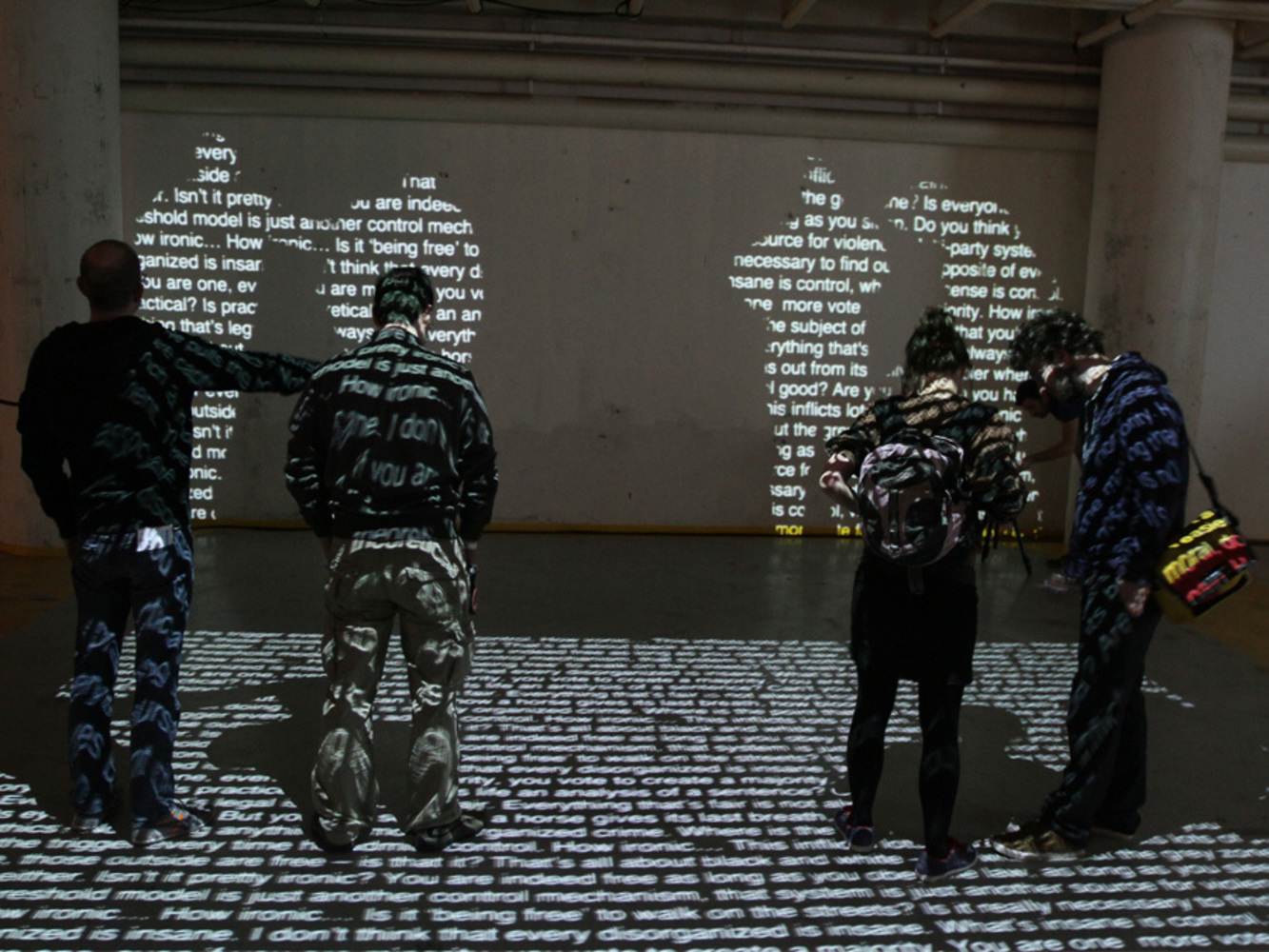 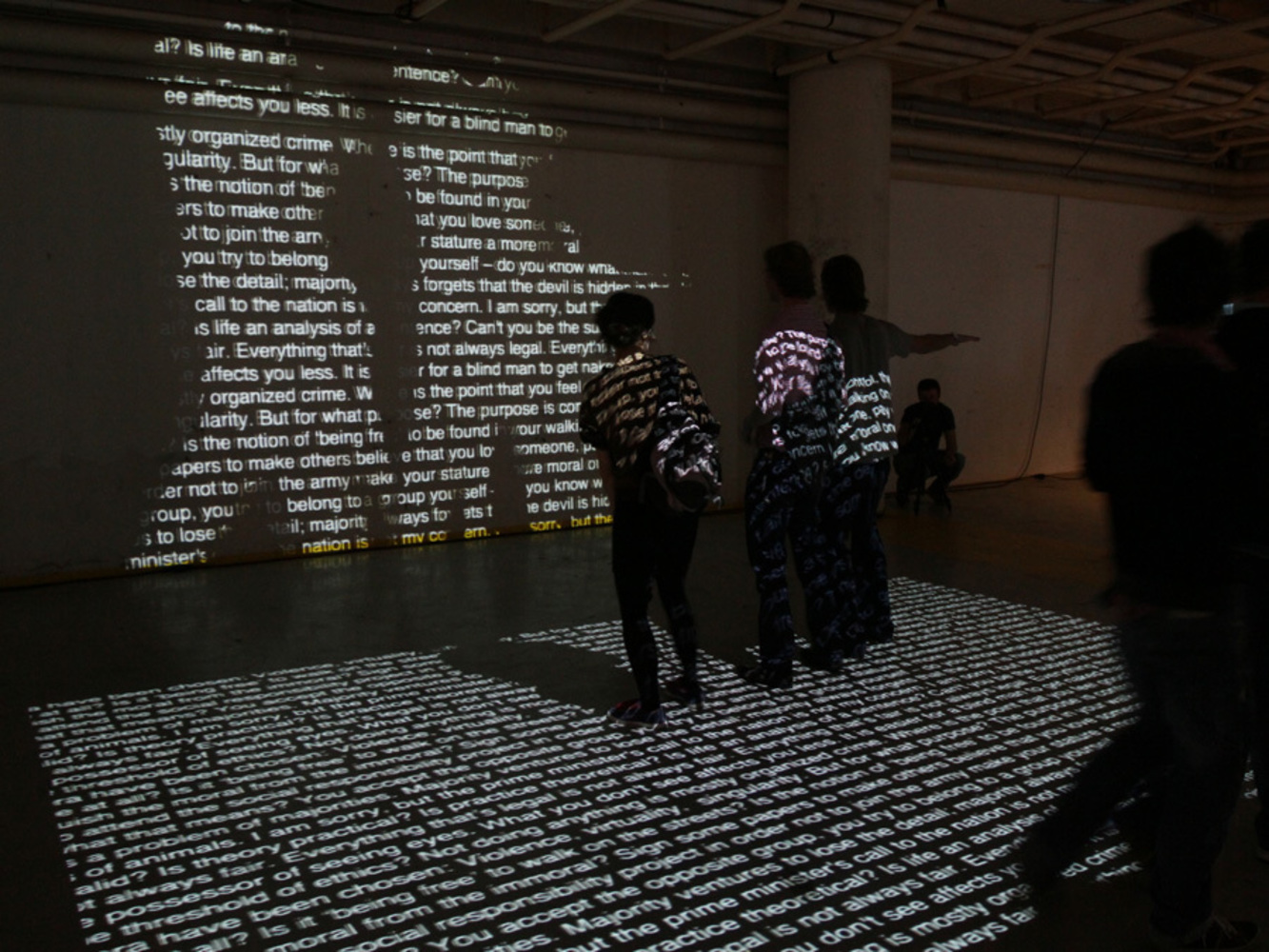 I picked this installation as I loved the interactive component of it. As shown above, the questions are deep while the very essence of the project is simple. It seems to suggest that we ourselves are made of this innate curiosity and wonder of these questions. I also liked the emphasis on human shape and form within the artwork. 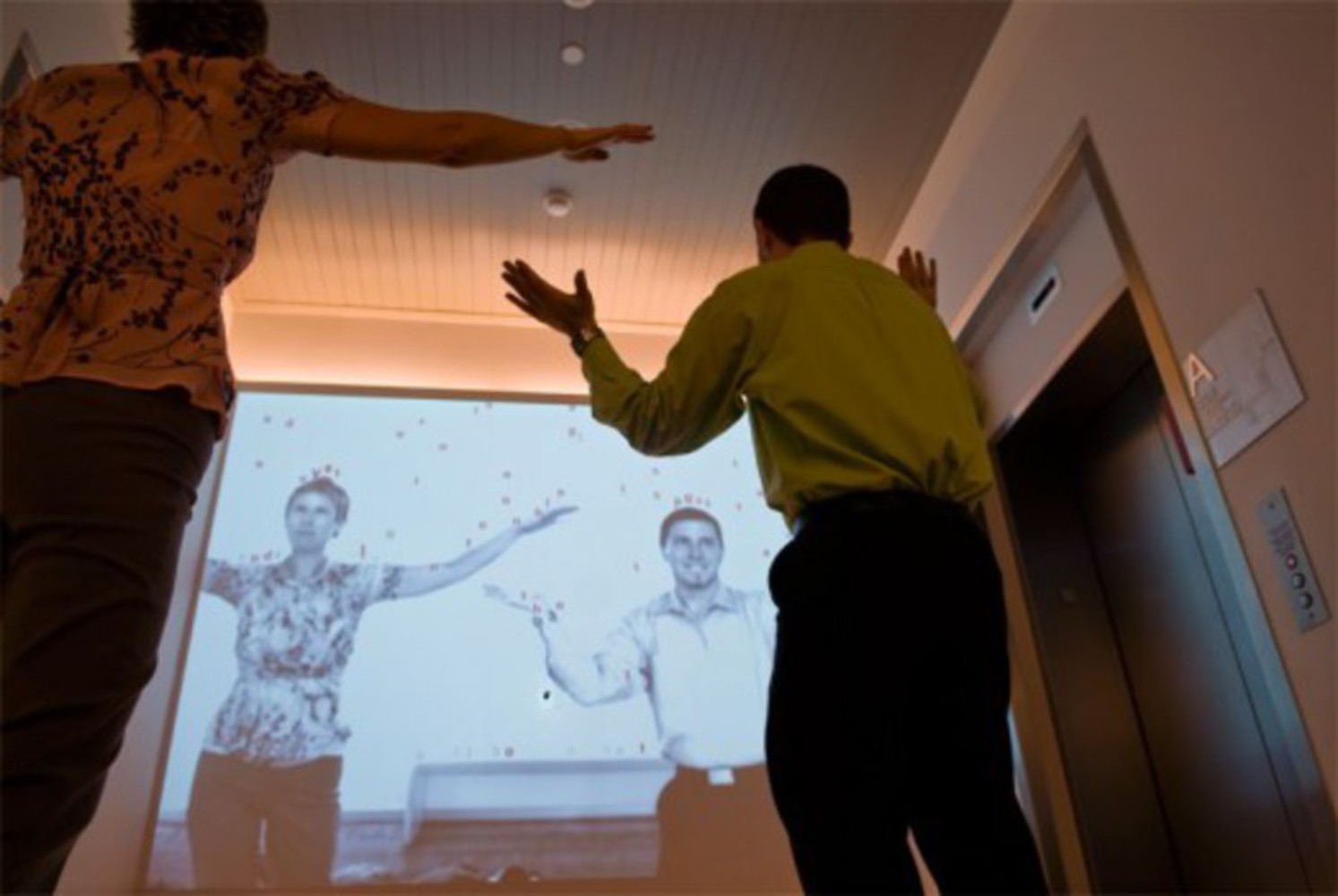 The work is very similar to the Text Rain exhibit we saw in class earlier -- participants in this exhibit use their own bodies to shape the existing text into desired shapes and patterns. I personally enjoy In Order to Control a little more, as it was aesthetically pleasing in that it wasn't simply mirroring the person back at themselves with a superimposed image. Looking at this work, I find myself wanting to involve the human form in a capacity within my project.

I critique Nota Bene's "In Order to Control."