Our big idea was to create an installation using fabric that creates a calming atmosphere, in stark contrast to the generally stressfully environment of CMU.  We wanted this installation to be a dark, private space where people could sit to escape the stresses of life and enjoy a liminal experience with projections and gentle sounds.  This would bring a moment of conscious peace to peoples' mind in a way that a nap wouldn't be able to achieve.  It is up to the individual's discretion how long to stay and enjoy that peace, giving them a sense of control so that they could experience it in the way they wanted to, without imposing restrictions on them.

We drew upon several themes and works seen in class when developing our project.

We started off with the idea that we wanted to emulate the theme of Nap Bar by creating some sort of relaxing environment for visitors to interact with and enjoy. Because fabric is a material that allows us to fully enclose a space, we sought to create a liminal space using the fabric in order to isolate the visitor from the bright and stressful outside environment, and thus bring an element of surreality to the visitor's experience.

For the design of the interior of the space, we were inspired by the student project where they projected light onto layers of fabric, set up in a staircase (unfortunately we forgot the name of the project and can't seem to find it again). There are also many other projects we have seen that incorporate fabric and light, so we decided to do so as well. We draped translucent fabric from the ceiling and projected a procedurally generated moving pattern onto it, creating a nice visual effect while also incorporating elements of random processes.

Finally, although we were not quite able to recreate it, the final circular exterior shape (as opposed to a tent or square shape) was influenced by Ann Hamilton's Habitus fabric installation.  We wanted to keep with a "circlular shape" theme, since circles are the simplest shape and have no hard edges or corners that could evoke a sense of harshness or sharpness.

Approaching this project, we first considered the various ways we could use fabric to create a liminal space. Almost immediately, we started considering approaches that would allow the viewers an escape from the library environment by using the fabric to shield them. After considering a few approaches, we finally decided on hanging dark fabric from the ceiling to create a secure, calming space for viewers.

However, we also wanted to make this space interesting and compelling. This is where the media component of the project could be used. We decided to come up with some sort of dynamic visual that could be projected onto the wave-like surface of the hanging fabric. This visual would have to be calming while also being interesting: something the viewers could lose themselves in. For this, we wrote a program using HTML Canvas and Javascript (code linked below) that would basically generate a set of circles on a black background, each with a different speed, direction, size, and shade of color. These circles would then move around the screen, bouncing off the walls of the screen and gradually all changing color.

After our desk crits, we decided we could make the projection more interesting by having the circles collide with each other to create some effects, and also by incorporating some sort of sound component to the piece. We also decided to proceed with circles since they are the simplest shape (no sharp edges) and would go best with our theme. After adding collisions with popping sounds and expanding circles upon collision, we fine-tuned the amount, size, and speed of the circles (see link below for final visual product) so they seemed more like bubbles. We also decided we would play some sort of background pink or brown noise with our piece as well. Finally, the last update we decided on was to change the size and shape of the projection by putting cardboard over the front of the projector. 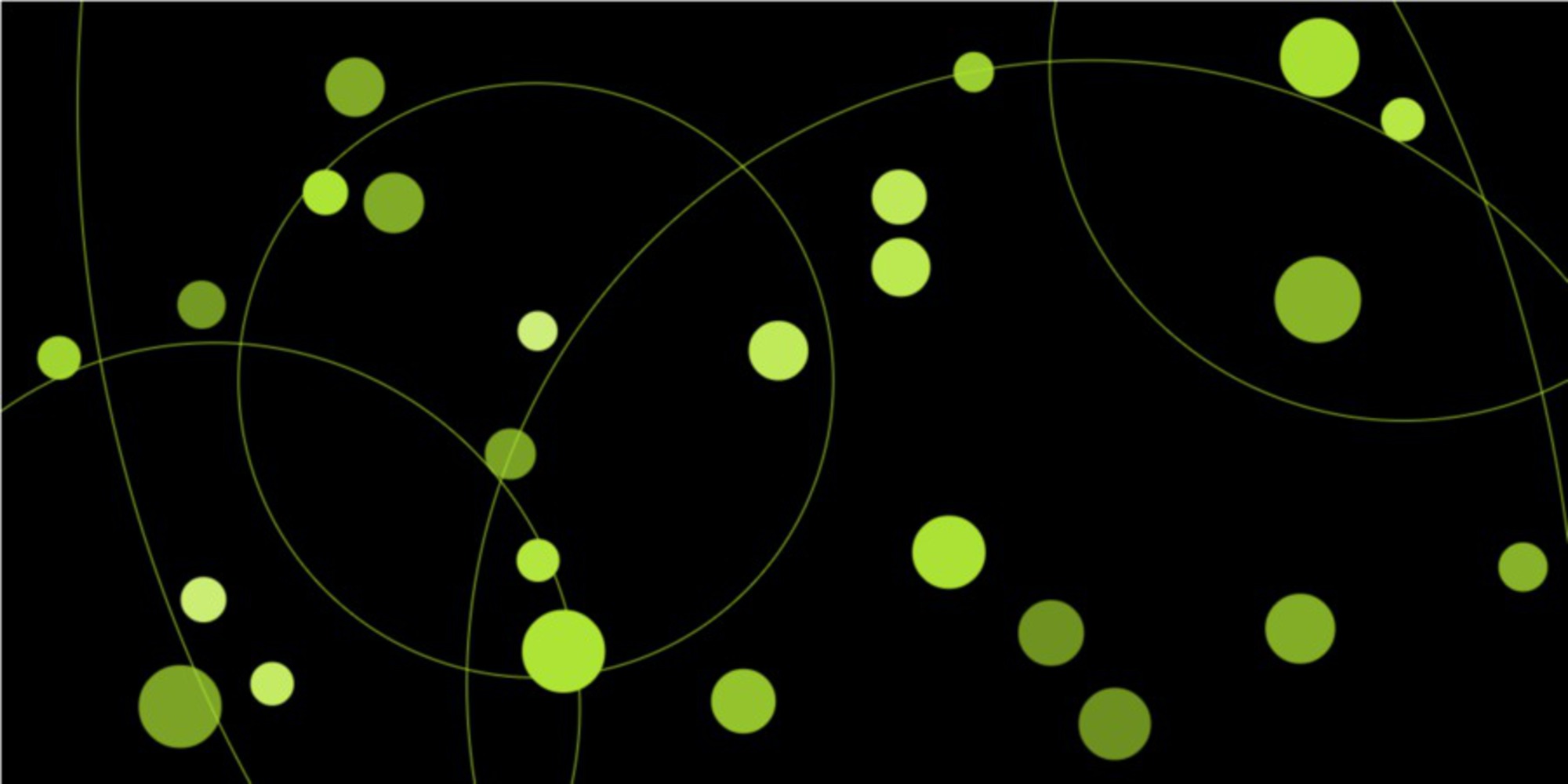 We created a tent-like structure where the person interacting with it would go inside and sit down to view a projected image on the ceiling of the tent and hear soothing noises while being shielded from bright light.  It presented itself as a curiosity in the library and would force those interacting to slow down and take a moment out of their day to sit.  The entire structure was composed of many different parts - fabric, projections, sounds, and miscellaneous pieces.

There were three different kinds of fabric: a dark, black fabric used to create the tent and keep out light and two translucent fabrics that were projected onto, one with sequins and one without.  The fabrics were adhered together with thread and hung from the ceiling using wire.

The projections were colorful, slow-moving circles animated using JavaScript and an HTML canvas tag with a black background.  The circles would create waves when they collided and a light popping noise.

The popping noises were layered over pink noise and played through a pair of computer speakers to create a soothing, neutral, personal soundscape inside the tent.

Inside was a comfortable library chair, tying together the library theme. 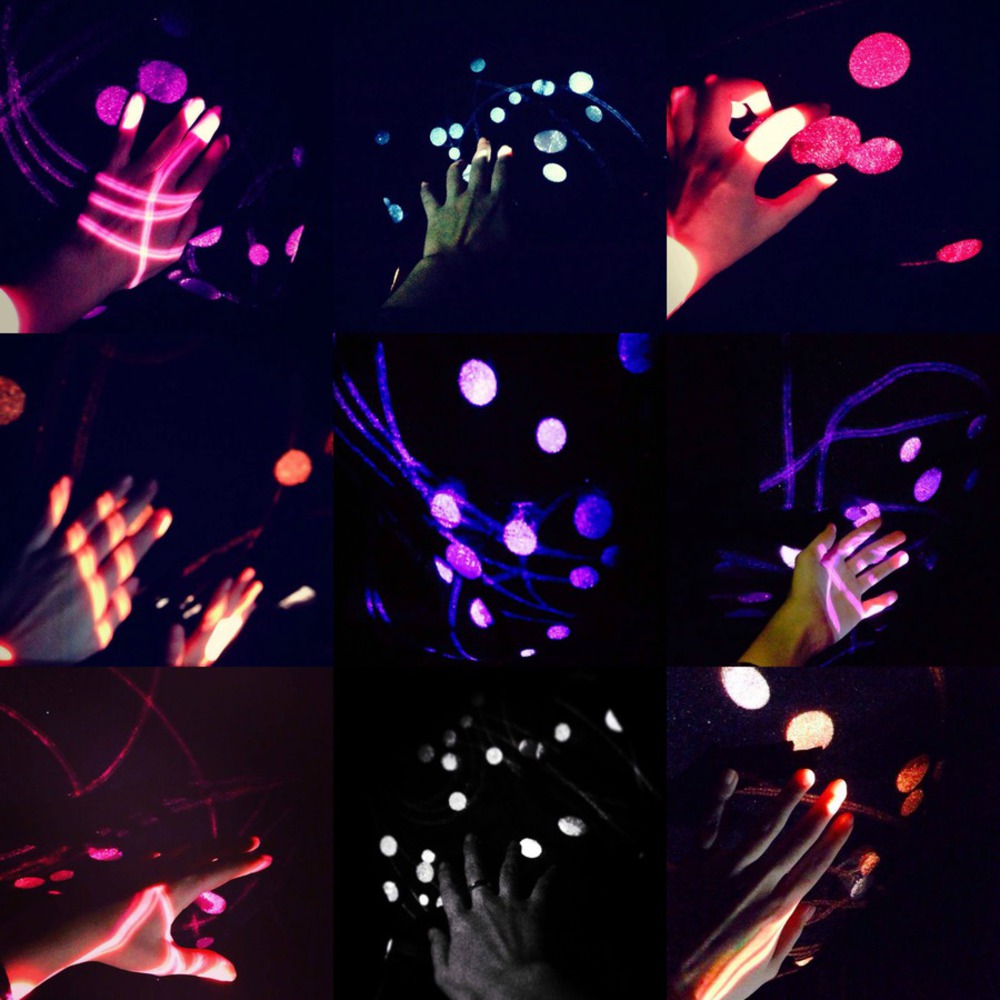 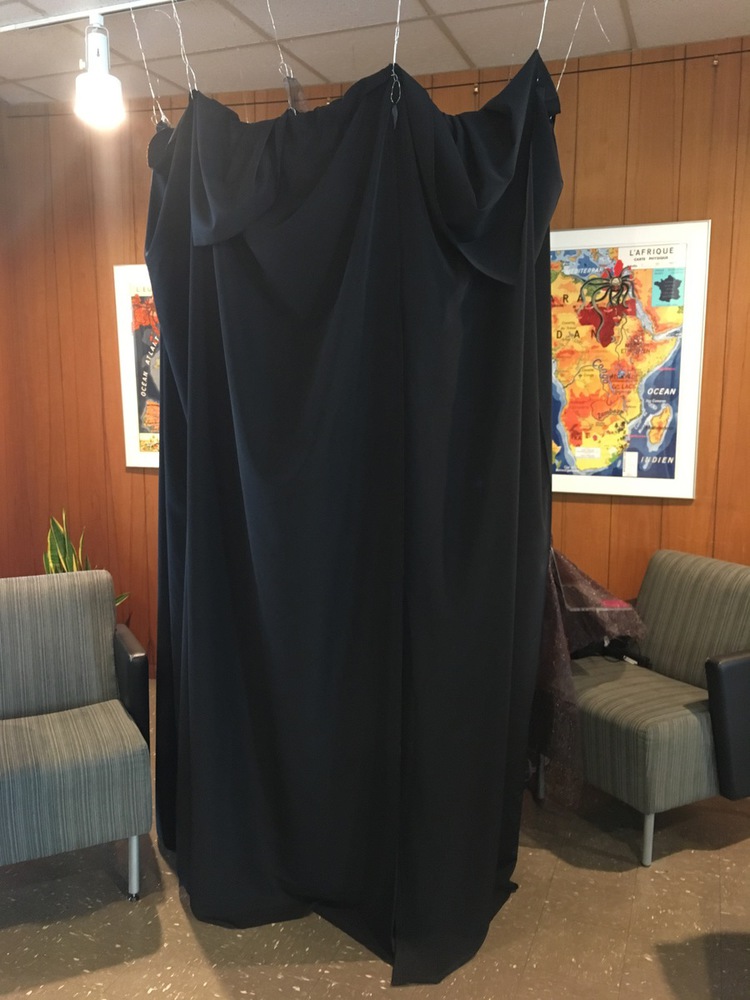 Everyone worked together on planning the project and writing the documentation.

It was successful in that the projection, despite being a bit smaller than we could have liked due to the projector problems we had, looked very nice and calming on the translucent fabrics hung from the ceiling of the installation.  We also received positive feedback on the tent being a "curiosity" in the library and being in a very open space, which prompted those walking by to wonder what it was and try it out.

It was unsuccessful in other ways.  Our focus was on the interior, so we didn't give much thought to the exterior, and it remained relatively plain and boring in the final installation.  The pink noise volume ratio to the popping noises was off and caused people to think it was either a fan or a boiler rather than a purposeful choice of a relaxing soundscape.  The projector being so close to people's heads while inside also caused interference with the projector's fan noise and bright light, which was unpleasant to some people.

If we were to deploy this long-term and at scale, we would create a series of these tents with more interesting exteriors (perhaps shimmering fabric to make them more inviting, and a draw-string curtain opening) and more interaction with the projections. They could be placed in a row rounded against the wall where they were previously so that more than one person could experience them at a time and they would create a further curiosity. The solitary experience of "getting away" is central to our theme, so we wouldn't have made any tent bigger to include more people.  We also would place the projector closer to the ground and away from people's heads to reduce uncomfortableness with that and play around with the soothing sounds.

We learned that installations are difficult to follow through from conception to being in a physical space.  What we imagined would be relatively easy in our heads turned out to be a real hassle in the actual space, such as hanging the tent from the ceiling tiles.  Since there was a light bar where we were trying to hang from, some of the ceiling tiles were attached to the drop-ceiling skeleton, making it impossible to put our wire loops around, so we had to put them in locations that weren't ideal instead.  We also had a lot of trouble getting our projector to actually project upward in the way we wanted, resulting in it being in a position that was too close to people's heads.  Our idea would have also benefitted from more prototyping to nail down exactly what we were going for and a sort of "practice run" in the actual space before we set up our final installation to work out details.

Although we never intended the interaction to be more complicated than people opening up the tent and sitting inside, a good point was brought up during the walkthrough that we could have added some interaction with the bubble projections.  Being able to gently swipe at them to change the pattern of ripples from collisions would have been a good addition and promoted immersion and relaxation.  We learned that figuring out interaction early and having people test it along the way would have helped to generate ideas.

We want to focus on creating an installation that creates a calming atmosphere, in stark contrast to the generally stressfully environment of CMU. However, we want to accomplish this while still having some interesting components that would actually hold the attention of the audience. Since our material is fabric, we decided the best way to use it in an interesting media based installation is to use it in a way that the audience would not only be able to view it, but also to interact and walk through it.

We want to hang up some light fabric that runs ceiling to floor and is easily movable (only attached to ceiling). This way it would not be an obstruction but still an interesting components. This fabric would be arranged in some sort of matrix which would create interesting patterns with our digital component: a projection of soft light patterns directed at the fabric. These patterns would be slow moving in order to remain calm, but would also cause interesting interactions with the fabric which would attract the attention of the viewers. For this, we would need some projector and power source. We also have possibly considered using small fans to make the fabric billow.

For our locations, we highly prefer the fourth floor area (right when you enter from the staircase) because that area is fairly open and would allow enough room for our installation. This area is also very quiet which is why it would be ideal for the direction we want to move in. If we cannot do this location, we would use the first floor area right outside the seating in the back as a backup. 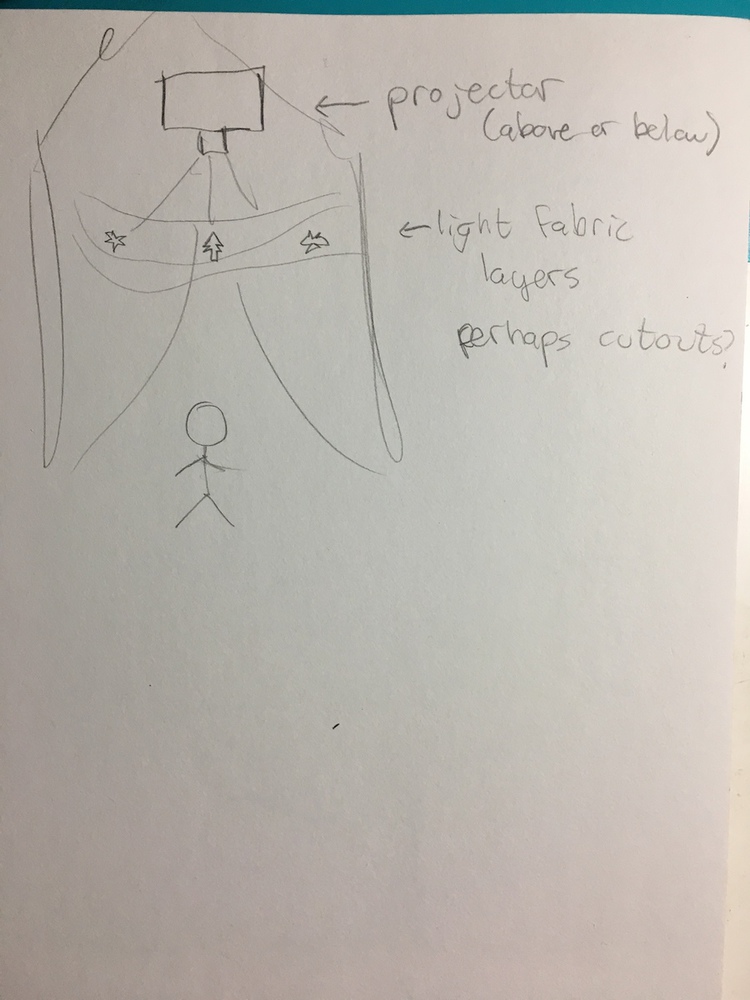 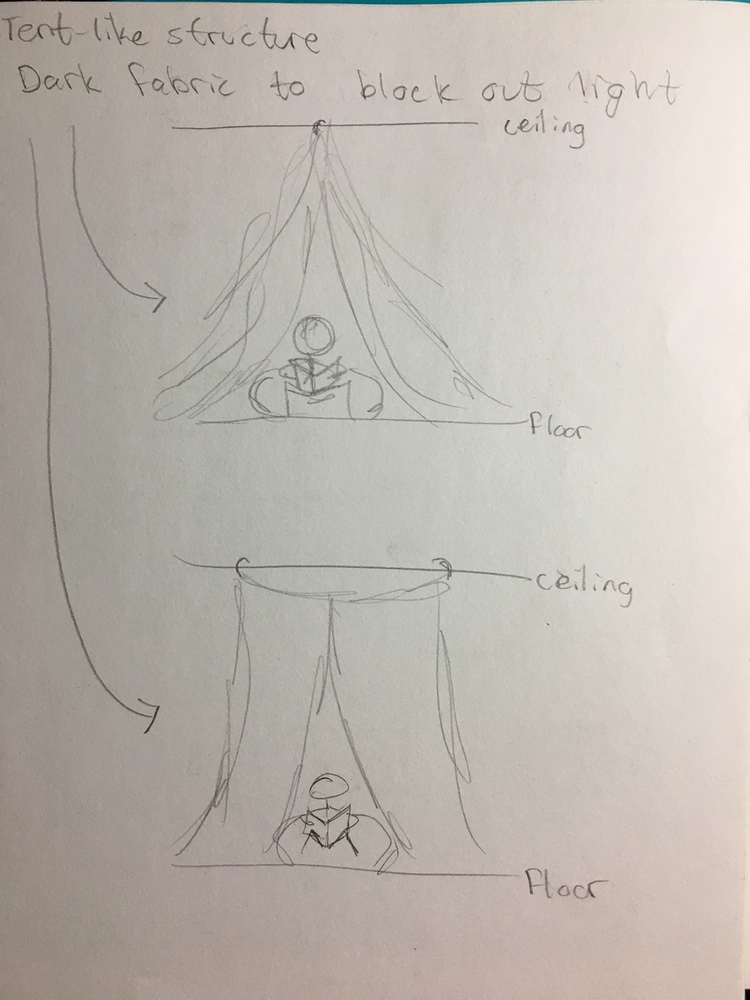 I really liked the final product of your project! I like how you created your own personal, dark space to project your soothing projections on, so that people who interact with it can be truly removed from the library space. I thought the black fabric effectively created a relaxing space, although it could be a bit larger and could be made more inviting with signs or more exterior information about the project, especially because it has a clear message about stress culture. In addition, I thought your documentation was very clear and the videos were really useful in sharing the experience of physically walking into the space.