When Icarus flew too close to the sun

Let me tell you a story of the lofty plans of Kaalen Kirrene. As soon as he heard the project the gears began spinning in his head. "What if I told an interactive story like the tell tale games. That would be soooo cool!" he thought to himself. But he also had a dilemma, "I always do something audio related but this seems like just a video." But then inspiration struck like a lightning bolt through his body "Eureka, I will just retell the stories of some of my favorites songs." With a new found vigor he began to think about who he should choose. Marianas Trench seemed like an easy option as he loved the band and they also had some interesting lyrics that could be turned into a video. The idea was that he would create videos where the view could choose what they wanted to see next at the end of each video and based on the choices a new song would be highlighted and thus a new facet of the story would unfold. However little did he know how grand the task he was about take on was.

The weekend begins with a surprise visit from his Girlfriends parents, and while normally this would be a joyous occasion Kaalen noted that his girlfriend a wizard with photography would be largely unable to help him this weekend and due to his lack of any knowledge of videograhy he decided to wait until they left. So come Sunday afternoon the parents leave but with them they take all of the energy of the weekend leaving both Kaalen and his girlfriend exhausted so the project did not start until early Sunday night. It began with a mapping out of how each song would fit together 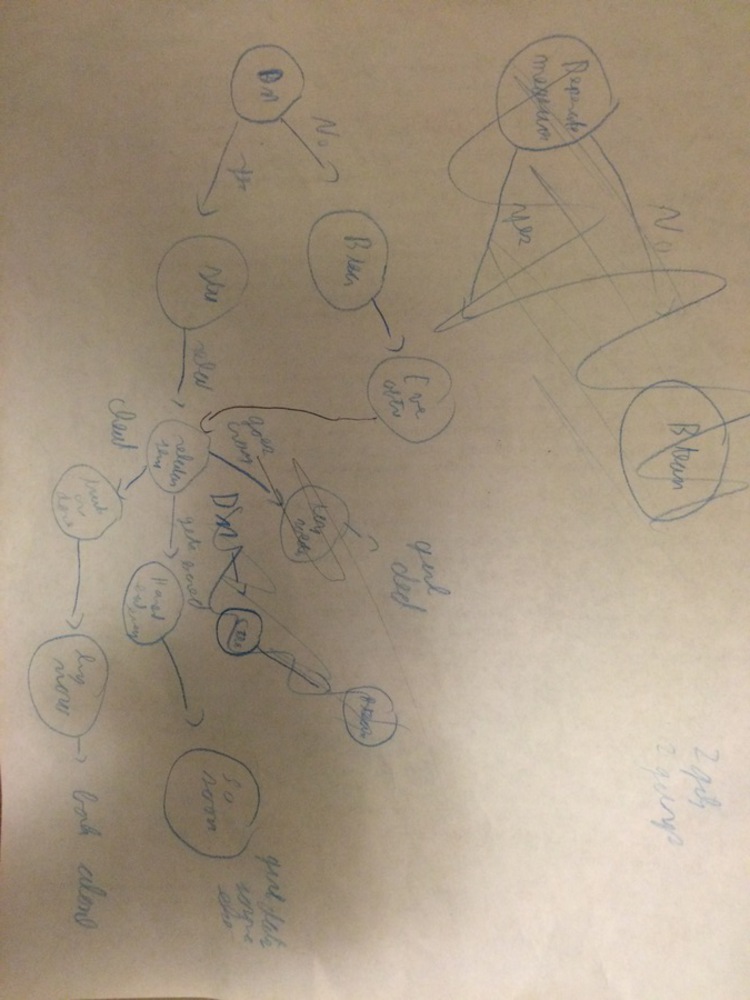 With this map Kaalen began to write up a script for the video. He wanted to really make it obvious that each video was a story of the song so he used the lyrics verbatim as part of the script even if it led to some strangely rhyming sentences.

Even though it was late at night when he finished Kaalen was confident he could get the project done in time. "Each scene has only 3-6 lines" he thought "I should be able to easily crank out 7 or 8 scenes." He recalled that his friends had warned him that editing video was a pain and very difficult but he brushed that off as he was not going to use any "cool" special effects. That was the beginning of the end for our friend Kaalen for just as Icarus did not heed the warnings of his father Daedalus, Kaalen did not heed the warnings of his friends.

The next day arrived and Kaalen realized that he needed a cast and equipment. "Well the ideate lending facilities have recording equipment and laptops with video editing software" he thought "and my girlfriend has a nice camera, I will just have to borrow all those things then!" So after class Kaalen went to the lending facilities and borrowed a laptop and a Zoom audio recorder. He asked the man at the front desk "Is there anyway I can borrow a laptop overnight? I need the software on the computer and I plan on working late into the night (It is precisely 3:28 am for those wondering). The man replied "We do not usually do that but if you get a professors permission then sure I can lend it out to you" So Kaalen emailed his wonderful professor with a question of lending and a possible extension for the project. 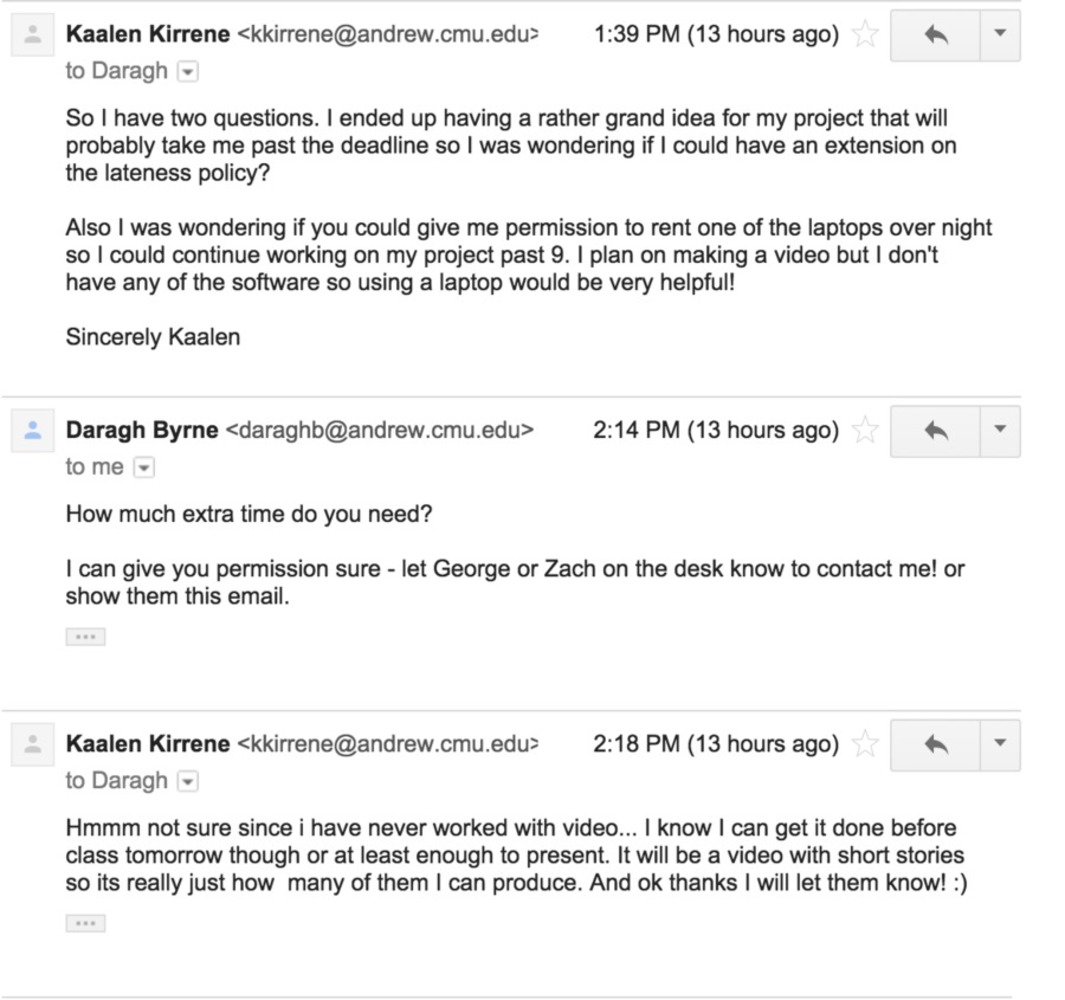 With his new found permission Kaalen was ready to undertake his project but before he left the lending man warned "You do need to come back with the express permission so I can recheck out the laptop." Although frustrated that he would have to return to campus later Kaalen agreed to the terms and went back to his home to begin the preparations for filming. On his walk back he began mass texting his friends asking for their help as actors in the film. He wanted people with acting ability but due to the short notice he had himself(4 musicals and play under his belt) and a former lab partner(a 6th grade play under her belt) as the leads. Luckily his room mate a former SNS member also volunteered so he had almost all of the roles filled or rather he had enough to begin filming.

After some initial awkward read throughs of the script it came time to actually begin filming and let me tell you filming with your friends is nigh impossible as an serious scenes immediately devolve into fits of laughter. Yet as the night dragged on more and more film was added to the camera and more audio to the zoom recorder. As it got later they decided to break fro dinner. Kaalen, remembering the lending mans words went back to campus to recheck out the laptop. He arrived at 6:30 only to find that there was sign on the door stating it was closed and would not reopen until 8:00. Feeling aggravated at the time wasted Kaalen got dinner and went back to filming. However while filming the time got away fro him and he did not go back to recheck out the laptop and now he is facing a $25 dollar fine which he nor this narrator finds fair as there was no prior indication that lending place would not be open and the sign clearly states open 7am-9pm so why should Kaalen be punished for something that was largely out of his control.... Anyway, finally the clock struck midnight and Kaalen had all he needed for what he thought would be an awesome project.

His idea for each scene was that he would include the song it was referencing in some subtle way whether it be from a ringtone or someone listening to it with headphones. He also wanted to have top notch sound recordings so he planned on syncing up the audio from the zoom recorder with the video from the camera. But it hit Kaalen that he had no idea how to use video software at all. He had only been to the audio labs. He began to feel the feathers from the wing suit of his great idea begin to fall. He realized he had flown to close to the sun and now he was plummeting toward the reality of his situation. However with great determination he flapped his arms and edited together 30 seconds of his scene for B Team. Yet it was after this that he realized that he was never going to finish all that he wanted to he just focused on Desperate Measures as it was the first scene of his story and the most lyrically relevant song. With a final push he got his video uploaded to youtube for a whopping 1 minutes and and 48 seconds of content (ignore the rest of the video its black because Kaalen does not know how to Final Cut). However he did not end up using the audio he had recorded and simply used the audio from the camera.

With his submission ready he began the daunting task of writing about the project to the ideate gallery. As he created the first stages of the submission he could not help think of the story of Daedalus and Icarus and so he decided he would be clever and all meta by writing his project description as a story as well as a pseudo separate project submission. He thought he could subtly hide all of the talking points within his story and as such fully capture the theme of this project.

Now if you have learned anything from this story of Kaalen Kirrene, I would hope that you would walk away with the knowledge that a lofty idea is not enough to form a fully fledged project. You have to make sure that it is reasonable and within you reach. Also I hope you have learned to stay within a discipline that you know. Kaalen learned the hard way that teaching yourself how to use software that you have never even touched before to do a task that you have no idea how to do is no small undertaking. And finally I hope you have learned that Kaalen's inner critic wished that he could have made the transitions between character talking smoother and the song parts fade in and out.