The final product is a virtual Newton's cradle with balls that change colors as they move. You can select how many balls to pull back and release with numbered buttons. It is a wooden cradle suspending the balls from strings with a space backdrop. There is a script message upon startup that tell you how to operate the program. The cradle was made using the Unity game engine to model it and program the physics of the balls. An image of the interaction screen can be seen below, as well as a videos from the showcase. 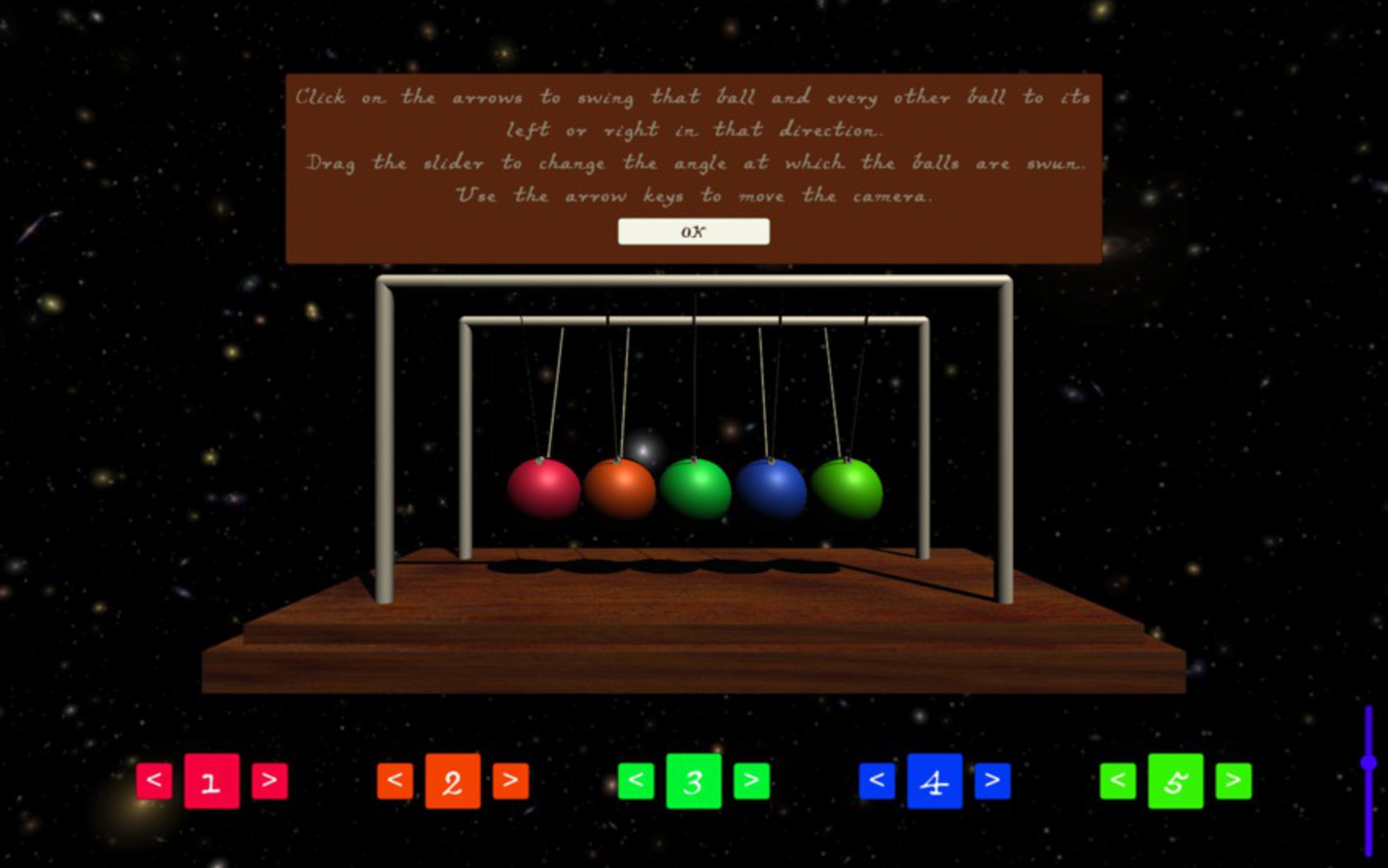 We wanted to recreate our module 3 installation of the Newton's cradle, but make it more refined. We originally intended to make it very physically accurate and more of a physics simulation. We soon found out that programming real world physics is more difficult than we thought. The final product's physical properties ended up similar to our module 3 physical installation in that when the balls collide they end up just swinging together instead of transferring their energy. We worked through this technical difficulty and went back to our roots from module 3. Our new intention was to make something that was visual pleasing, and distracting similar to our module 3 project. We still kept some of the physics experimentation in the program in that you are able to adjust how many balls you pull back, and how far you pull them. We took the propagation of force that a perfect Newton's cradle would have, and changed it into propagation of color in the direction the balls swing.

This piece relates to ours because it accomplishes what we set out to do in simulate virtually what an object will do in various physical situations. Our project will however be a bit more focused on the participation of the audience as opposed for scientific experimentation.

This was one of my lookingout4 submissions, and I think it provides good context to what we want to do with this project. These figures are put on a virtual stage and flail their bodies randomly. This performance is interesting because of how the bodies distort in ways not possible physically, and the randomness of their movements. This newton's cradle project also wants to explore things that may not be possible in the physical domain, and can maybe learn from this project to add some random aspect to engage the audience.

This installation in essence puts the audience in a distorted physical environment, in which time does not follow the usual laws. This artificial illusion made by the swinging lights is what causes audience members to be interested in spending time in the space. Our newton's cradle should cause the same feeling from our audience, but in a virtual space, and allow them to view things in a way they could not in the physical domain.

This is another installation that plays with the audiences perception of reality with the movement of lights. It engages the audience by alternating speeds, and making the light show visually pleasing. We can get a better sense of how we can simply make our project fun to observe so that audience members will want to watch it.

We chose to do this project because we thought it would be interesting to move our module 3 project into a virtual space. We wanted to incorporate audience participation more, and to allow them to play with physics in a way they could not in reality. There is an element of randomness to this virtual installation because as there are set rules to what can be done, the audience is left to decide what to do with those rules. I feel like the project would be best experienced in VR with different controls than just the mouse, because this would make it feel more "ready-to-hand."

The intent was to create the Newton's Cradle in Unity. However, as the project progressed, several limitations of Unity were realized, including an antiquated physics engine that could not properly simulate a Newton's Cradle. The attached spreadsheet shows a complete list of bugs and how they were either fixed or compensated for. The biggest problem was that Unity physics would not allow for the balls to transfer momentum in the way that a real Newton's Cradle would. Fixing this would have involved rewriting the physics, which would have taken too long. In the end, we decided to add color changing to each ball and allow for the potential of a glitchy mess if one of the balls was spam-clicked by a user. The result of this can be seen in the image below. The result ended up behaving much like the original Newton's Cradle project from Module 3, except in digital form. The original essence of the project is there--it is a distraction. 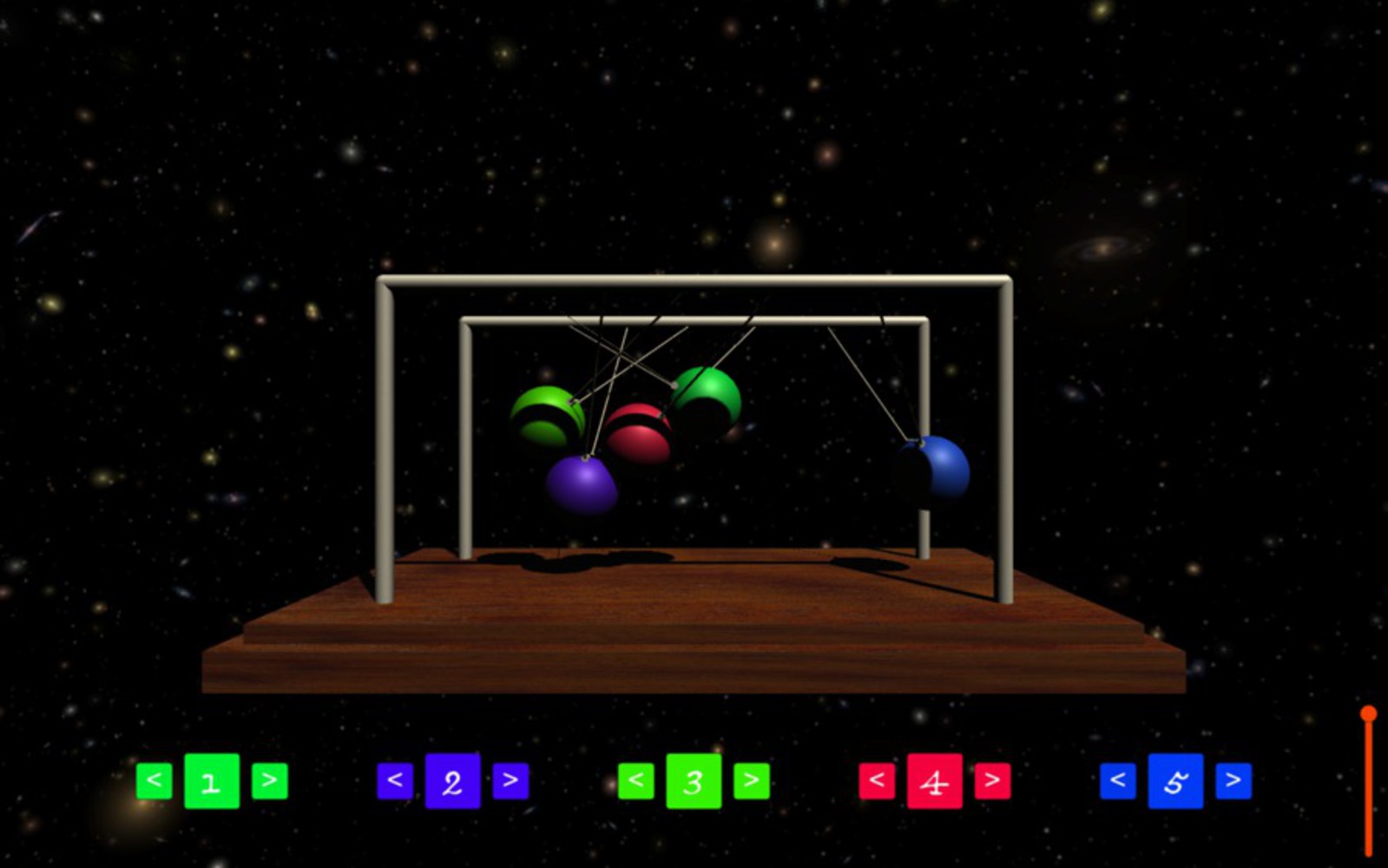 I think this project may have been a bit ambitious in hindsight since only one of our group members was proficient in Unity. We did not anticipate that creating a physics simulation would be as big of a challenge as it was to program. This led to a bit of a wonky final product in terms of the physics it represents. I think we made the project interesting nonetheless, and it was fairly fun to play with. An unintended feature was that if you quickly pressed the pull back buttons at the highest angle the balls would flip all over and create cool arrangements in the cradle (picture below). From this project I learned that Unity physics are hard to program, and an important lesson on making the best of a project when technology won't cooperate. If we were to do it again we would need to spend more time learning how to program real world physics into Unity, or change the medium for the Newton's cradle entirely. I would also consider different ways of inputting for the user.

This was all that was used for the project itself. Links to content that informed and inspired the project can be found above, under "Context."

You idea of incorporating physics principles to an art project is amazing! Last time your project looked really nice in the dark room, and I really look forward to seeing you carrying it out in Unity (or in some other softwares). I would like to see how materials matter in Newton's cradle, and I think it would be really nice if you can still maintain the interactivity of your project. You may want to consider how to invite the audience to interact with your software-based project like last time when they are allowed to play with the transparent spheres.