Made by Christine Lee, Roger Liu and Sienna Stritter

The intention of this project is to create a piece of video art that describes the routine system of progression found in the Metroid game series. Specifically, in the games the main protagonist Samus starts the game with all of the upgrades from a previous mission, somehow loses access to those upgrades, and then regains them by the end of the game, creating a predictable cycle of events. The ultimate goal is to be able to demonstrate this narrative using the optical illusion of illusory contours.

The video below details the character Samus running through a series of four maps. She starts off as just a visor and with each map she transitions to, she gains a piece of armor / detail. It goes in the progression of visor, gun, helmet, body, and then full detail. She then gets into an elevator and goes on to the "next level," where it starts all over again.

Sienna used Photoshop to replace the sprites' features with single colors like the minimalist image set as this project's cover photo. There were 20 frames in the sprite gif, which she edited separately 4 times. In total there were 80 separate frames that she created.

Roger took took those sprites and animated them. He cut out chunks from the maps from the Metroid games that he found to use in the video as background. Prior to the sprite frames being finished, he made a prototype (further down the page), and once the sprites were finished, he replaced the sprites to finish the video.

Software: Adobe Audition to create the sound, Sony Vegas Pro to zip the sound and video together.

Although we had first thought to incorporate an auditory illusion into the video, after testing some out, it really only seemed to clash with the rest of the work, so we tossed the idea and sought ways to make the loop more seamless. 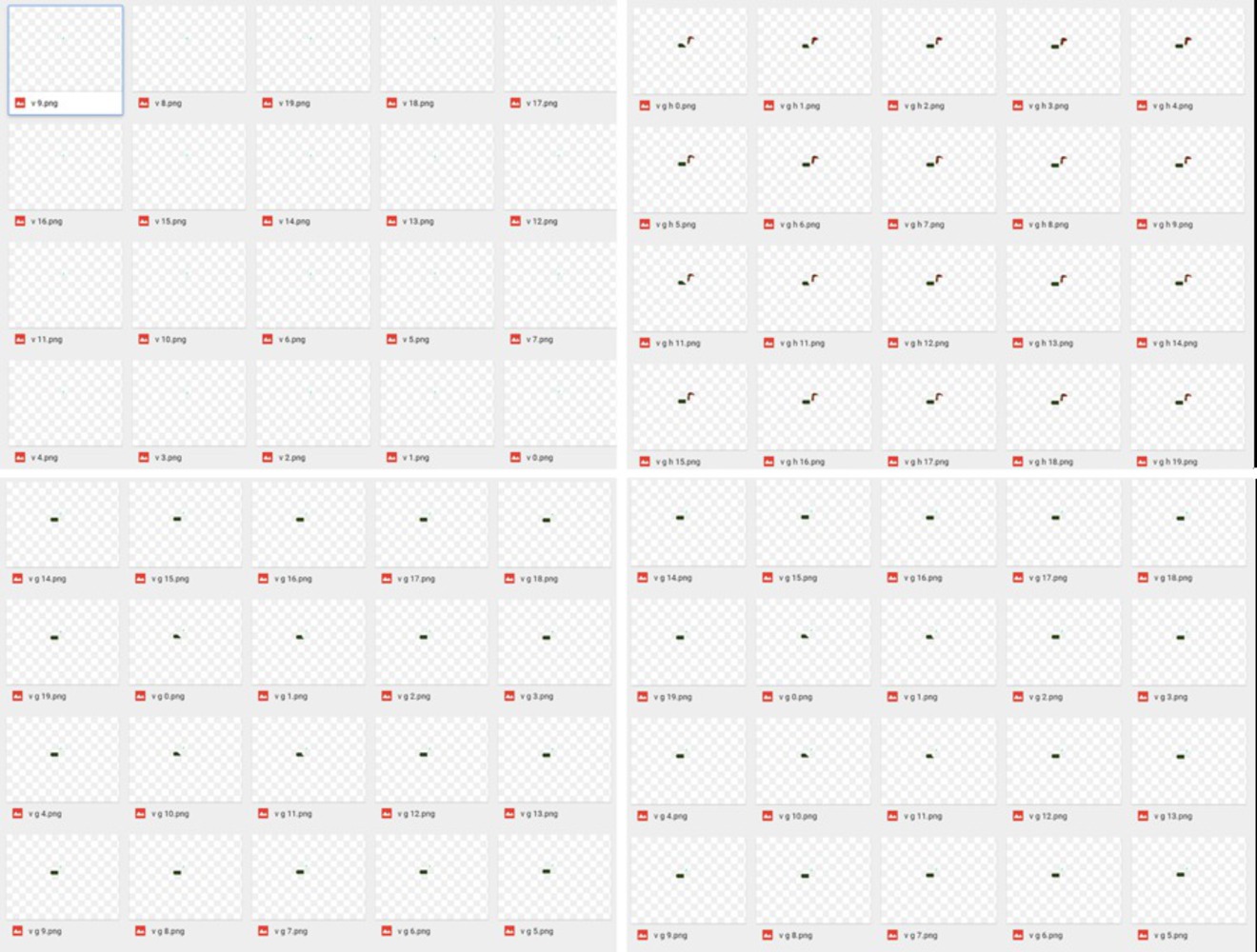 0
Audio Editing with Video as Reference 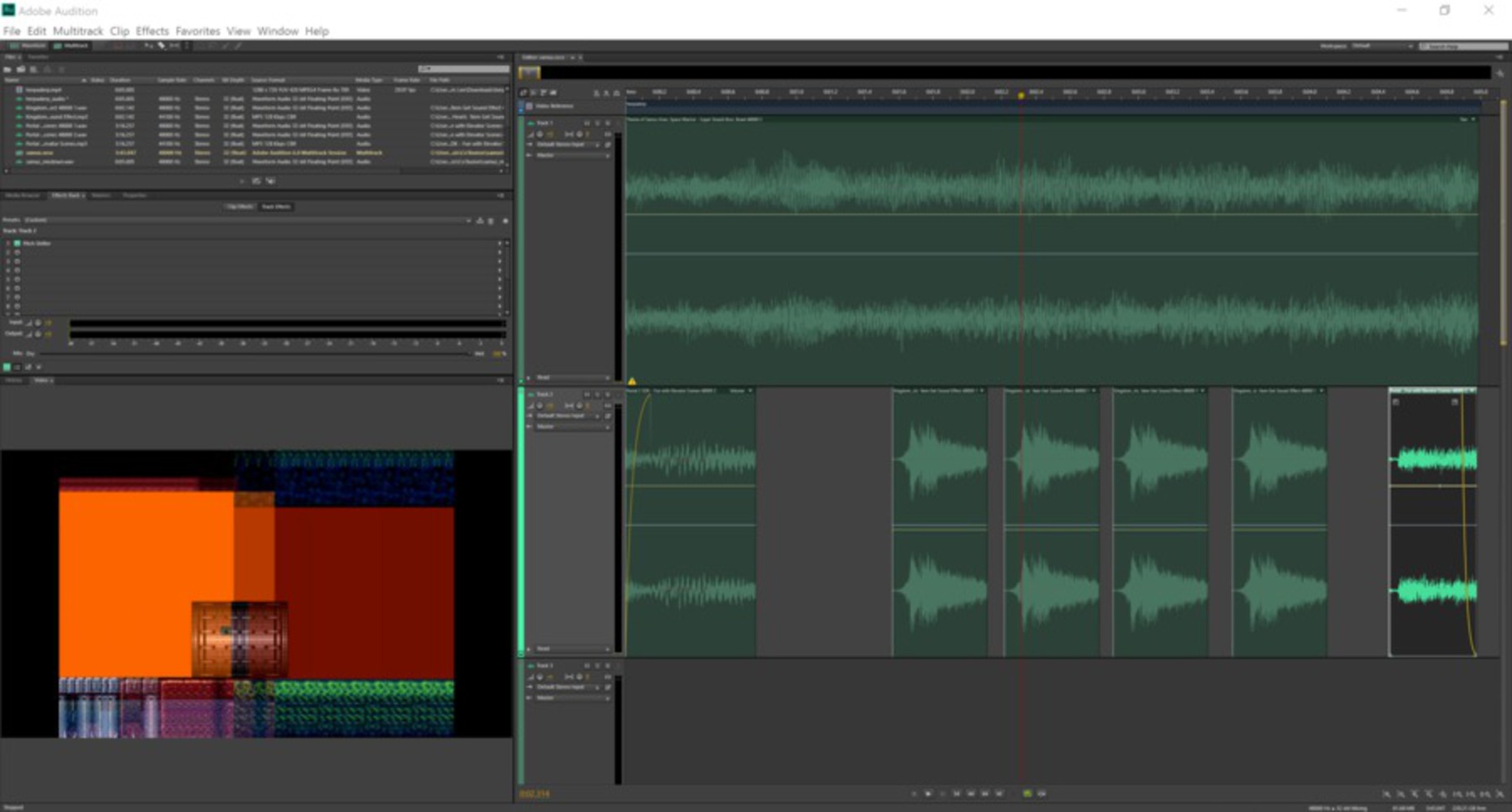 The perceptual illusion used in this work is that of illusory contours. This illusion occurs when an edge is perceived without luminance, color, or texture differences defining that edge. This happens because objects in an image inform the viewer of other figures whose outlines aren't explicitly present. 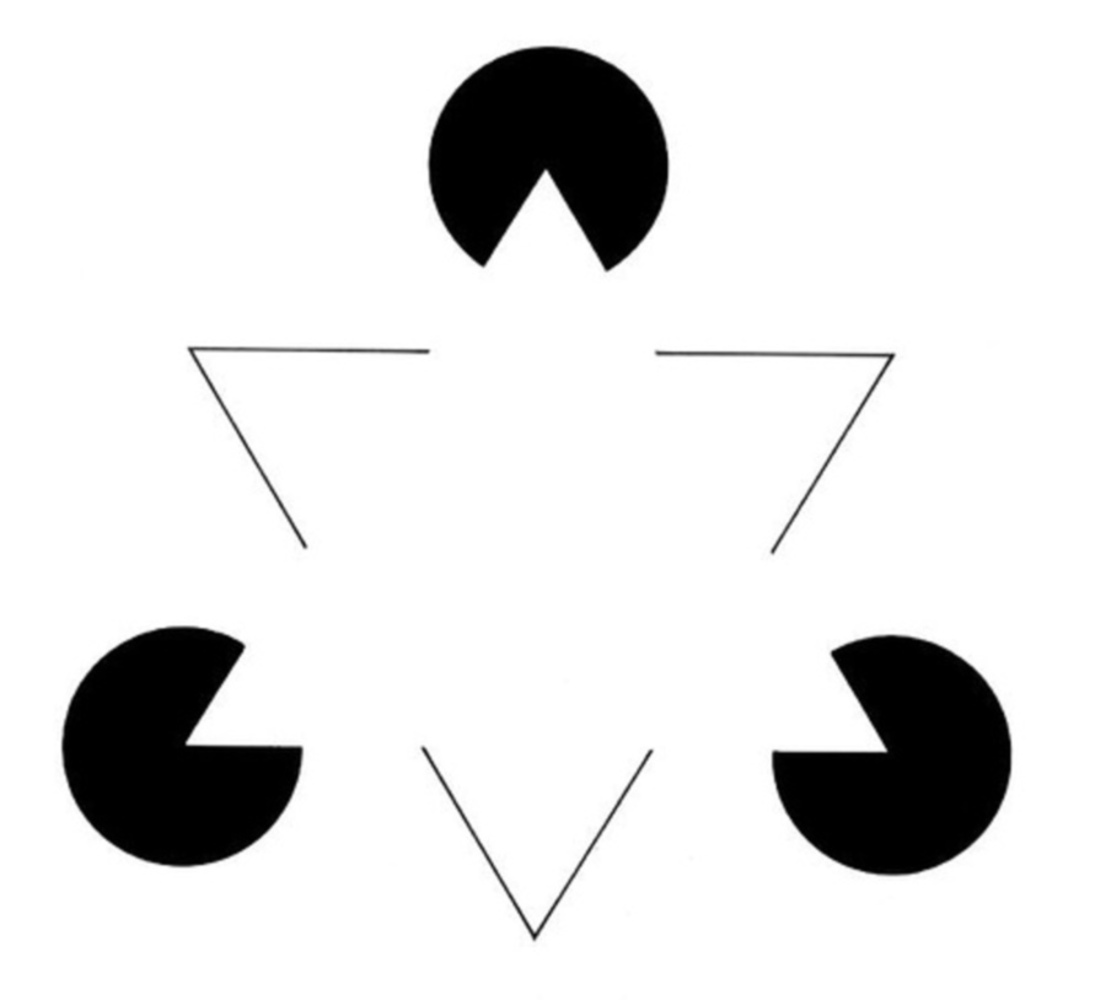 In the classical example of Kaniza's Triangle, the pacman figures around the image inform the viewer of the presence of an interior triangle. In the context of this work, we use illusion so that we can convey the motion present in the original running animation while only using specific details from that gif.

The idea originally came from the minimalist Samus piece presented in class during the illusory contours presentation. This gave us the initial idea of leveraging illusory contours in our work, specifically focusing in on the minimalist style. After discussing ways to integrate the illusion in the work, specifically ways to make illusion a focal point of the work, we noticed how the minimalist style only shows the bare essentials that make up the character, an observation which drew comparisons to the Metroid game series. 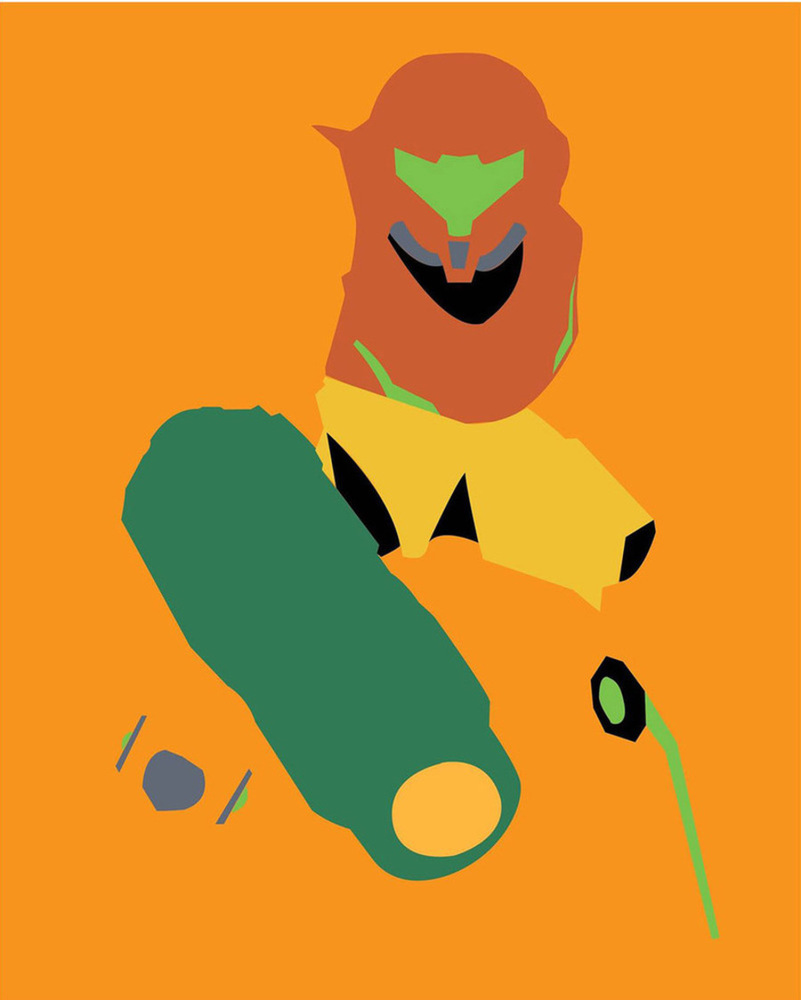 In the Metroid games, you play as bounty hunter Samus Aran, going through a series of environments collecting new items which will help you progress through the game. Since the series follows a linear continuity, there is a trope that at the start of each game, Samus inexplicably loses all of the items she gained from her previous mission, allowing the developers to build a fair and reasonable difficulty curve. In this piece, we try to illustrate this meta-narrative by leveraging illusory contours. As Samus descends to the "start" of the game, she is reduced from her full appearance to just her visor. Then, as she goes through each area, she regains more of her original form until she reaches the "end" of the game. The perceptual illusion is leveraged in this case to give Samus a sense of shape, even through she doesn't explicitly have one until she reaches the end of the game.

The work is somewhat similar to other animations which render the same scene in different styles. These typically invoke a sense of nostalgia and progress, as seen in this demonstration of a feature in Super Mario Maker.

After doing research on illusory contours, our group was intrigued by the fact that even in the absence of clearly defined boundaries, outlines of objects were identifiable due to illusory contours. Our idea came from one of the pieces we looked at in class, of a minimalistic rendition of Samus.

We started by picking a gif of Samus running, and then Sienna used Photoshop to isolate different elements of Samus’ figure in all the frames. She “blobbed out” the colors in order to create the minimalist impression. Meanwhile, Roger started creating the animation by taking a bunch of maps from the game Metroid and splicing them together to create the hallways. He added the original gif of Samus running, just to give us an initial idea of what our project would look like. This first iteration of the gif is shown below:

One challenge we faced was that the original images Sienna exported from Photoshop had black backgrounds. But Chris and Roger helped her figure out a way to export them with transparent backgrounds, which helped Roger add all the minimalist, blobbed out frames of Samus to the animation.

Then it was time for Chris to add the audio. Initially, she wanted to put in the tritone paradox as an auditory illusion, but she didn’t end up liking how that sounded. So, we decided to toss that idea and keep the focus on the visual illusion. So, Chris added the background music as well as the sound effects for passing through each stage and for descending in the elevator. Then she tweaked the timing of the audio and video to make the final product into a pretty seamless five second loop.

Our inner critics believe we made something beautiful. The transitions and loop are pretty seamless. One thing that did bother us was how the sound skips a little when it loops back to the beginning. However, after making attempts to fix it (by fading in and out), it seemed to have no effect after uploading the changed product up on Vine.

The illusion is clear to see, though. When the background is completely orange, we can still see Samus running and swinging her arms even though there are no lines or details to tell us explicitly that she is running. Because orange covers her gun, we can infer that she is running. We think we did a good job of highlighting this phenomenon.

This project was different from our previous ones because we had to learn to work as a team. Our group did a great job planning what we were going to do, so everything went extremely smoothly. We set out tasks and had a workflow where each person would pass their work onto the next person. Everyone got their own portion of the project done in a timely manner, and offered to help others finish their contributions as well. Each group member brought something different to the table, and we did a great job of delegating appropriate tasks to each person. Overall, there were no major problems, and when something we thought would work initially didn't, we found a quick replacement or compromise.

In the process of making this project, we learned about some details and features of Photoshop and Flash. We also learned to be flexible, because some of our original ideas didn’t end up working out quite how we imagined. For example, we considered a couple of different gifs before choosing one to dissect, and we tossed around a few different ideas for audio trying to figure out what would best enhance the illusion and the gif. If we did the project again, we might try to figure out how to make the loop smoother to create a more continuous experience of the illusion.

Very neat project! I didn't think that you could incorporate movement into the illusory contour effect, but you guys did it very well! Having worked with sprite animation myself before, I imagine a lot of effort must have gone into this project and it clearly shows. Also, using Vine to present your work was a very good idea, since it allows for clear playback and seamless looping, which I think is important in order for your illusion to work. Good job!