Made by Nazli, Everi and Ricardo Tucker

For our project we took a video of the colored lights on the Randy Pausch bridge while they were displaying the moving rainbow effect, and made it into an endlessly looping gif. We are aiming to capture the beauty of the lights at night. The bridge itself is a symbol of the link between art and technology, which is something this class shares and something we want to emphasize in our work. For audio, we recorded typing sounds in a certain rhythm such that the sounds will be pleasing to the ear, but also originate from technology.

Our gif, being a video of the Randy Pausch Bridge with typing sounds, captures a symbol of the link between art and technology. We play with the color of each frame, but the brain is able to adjust based on each frame's background in order to always recognize the rainbow-colored lights that were actually present.
0

The idea behind our project is that we wanted to show even though technology and art sometimes seem to be completely separate topics, are not independent from each other. We are all computer science majors and we are in this art class, so we wanted our illusion to also show the combination of these two topics. The goal was to bring these two together. For that, we thought about something that is created with technology, but it also very beautiful. There are many digital images and art that is beautiful, but it doesn't capture the feeling of being in the presence of it, like the feeling people get in the museums. We then decided on the Randy Pausch bridge. Randy Pausch bridge is a bridge that is known for how pretty it is at night since it is lightened with many different colors that move and change. It is both made beautiful with technology, and it was our motivation.
0

We shot the video of the bridge on an iPhone 6 camera, taking about 10-15 seconds of footage of the bridge's moving rainbow effect. To create the looping effect of the gif, we edited the video in Final Cut Pro, speeding up the video so one iteration of the rainbow loop would fit into the 3 second gif and cutting the clip so that the first and last frames would appear as identical to each other as possible (e.g. the colors on the bridge would be in the same location).  In order to minimize how noticeable the loop of the gif was, we also applied a stabilization effect that removed the jump caused from the gif looping.

The colored filters over each frame were added in Photoshop. The filters iterate through each color of the rainbow and then to no added color at all to give viewers an idea of what the natural colors of the lights should be.

The sound was done with sound recording different typing sounds in different speeds and then combining them together. One of them was the Shephard's tone, to create the illusion and the other sound was a monotone typing sound.

The illusion used is called chromatic adaptation. The frames in our gif are covered in colored filters, but our brains are able to gather information about the image as a whole to determine what color we should be seeing despite the actual color being displayed.

Below is an image showing the Bridge with and without a red tint. The top cutout has the tint and the bottom cutout does not. At first they may look the same, but notice how the first half of the top (tinted) cutout appears pink but the red to orange gradient is clearer in the bottom (untinted) cutout. Also, the green section in the top (tinted) cutout appears much darker than the bottom (untinted) cutout. Now look at the same tinted frame with the background to give context. The gradient is very clear and we can still tell that the green part is bright green. This is chromatic adaptation.

The sound is a combination of two sounds: One of them is a monotone typing sound in the same speed, and the other sound is imitating the Shephard's tone, which is an auditory illusion that makes the sound seem like it's always getting faster. 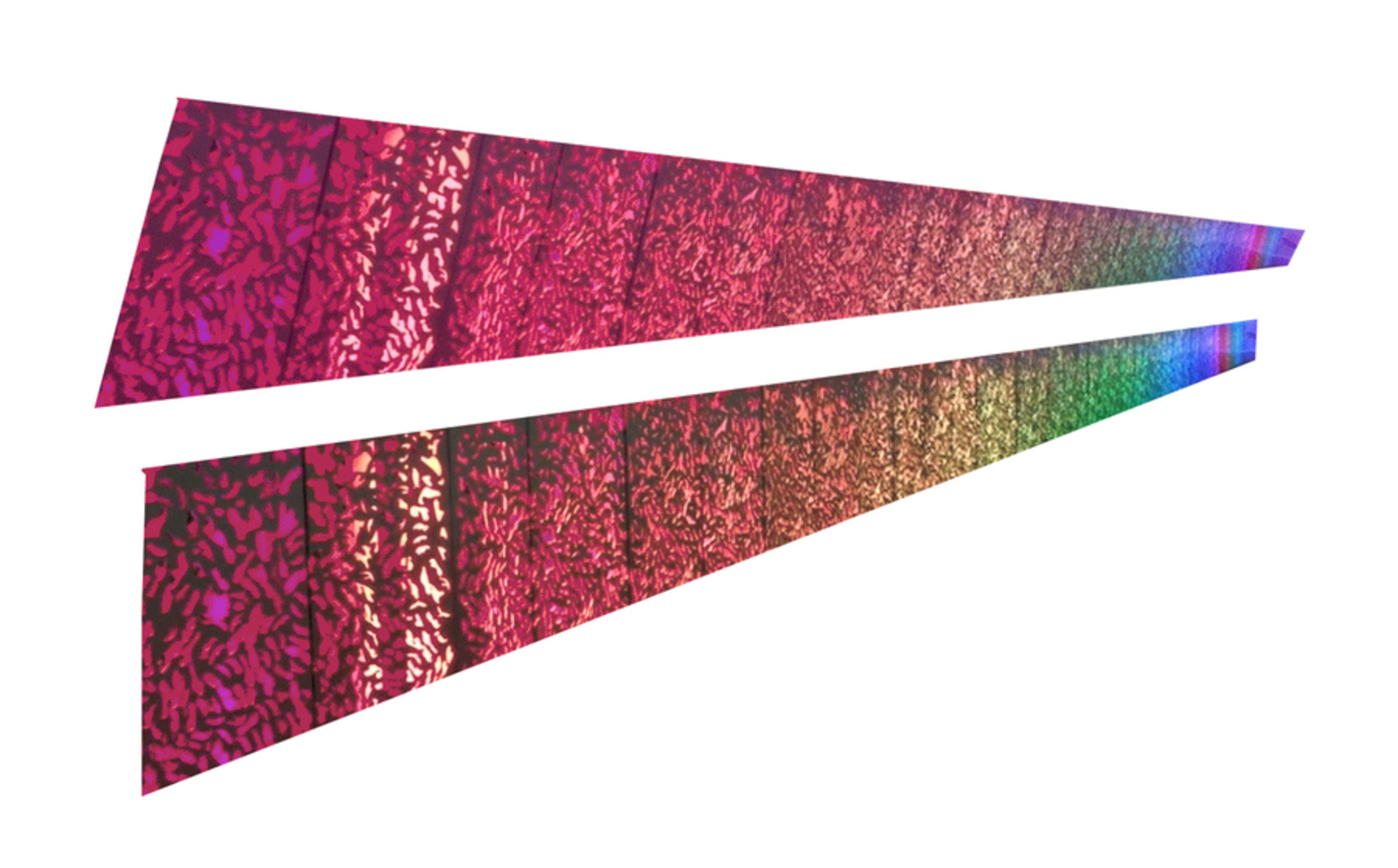 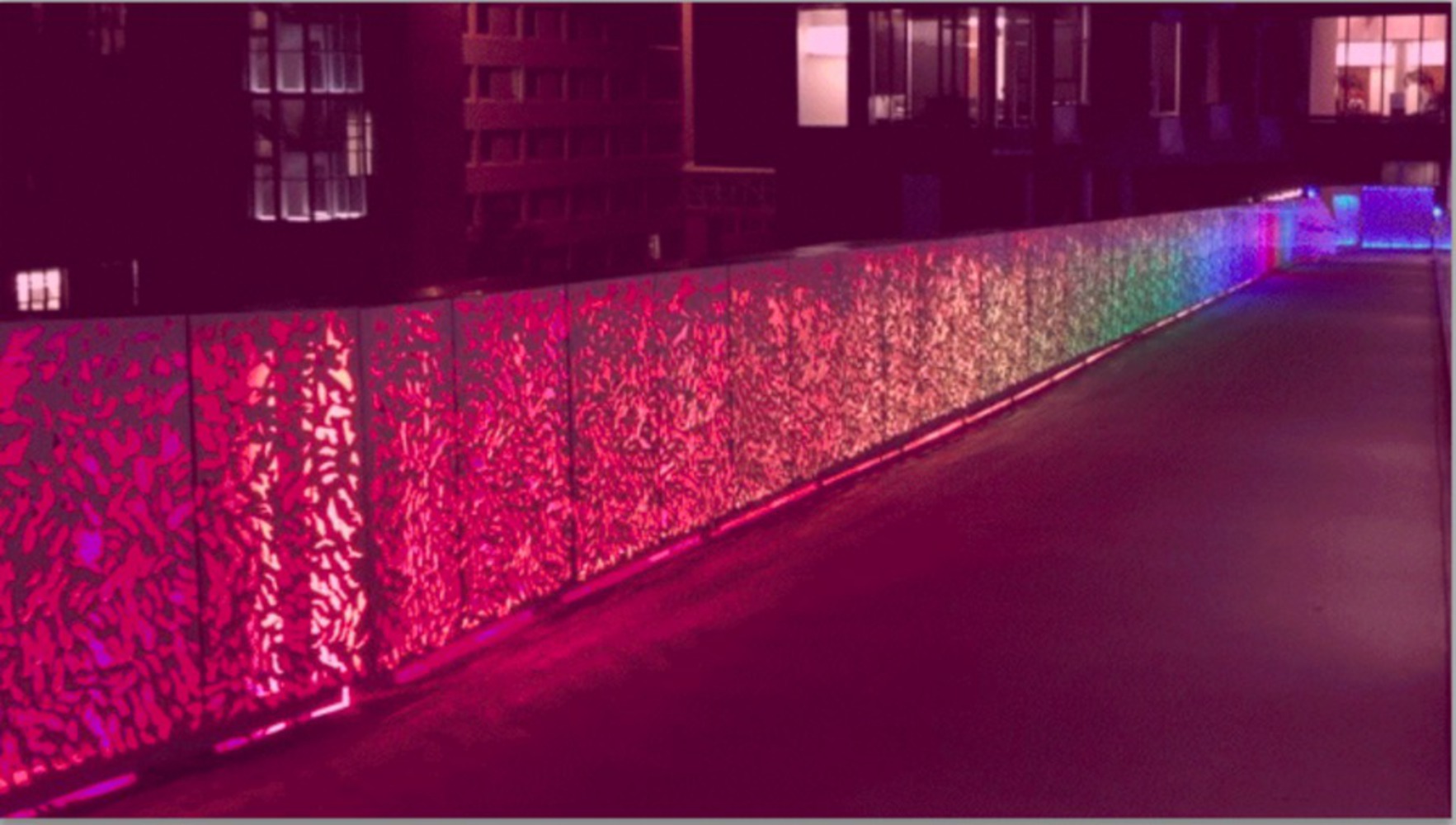 This works because the red background is giving our brains a clue on how to interpret the image.

Our project incorporates an already existing piece of art: the Randy Pausch Bridge. The ideas and symbolism behind the Bridge itself give meaning to our work. The Bridge represents the link between the arts and technology, which is why it literally connects Purnell (the fine arts building) to Gates (the computer science building). Thus, our work does not specifically relate to other artwork, but rather incorporates another's work to capture meaning.

Our original idea was to create a stereoscopic video of the Bridge with two cameras in order to simulate depth. However, due to differences in our cell phone cameras, we were unable to create the effect we wanted. We next considered making a flickering stereoscopic image, but we were also unsuccessful in doing so. It turns out we would need more precise equipment to get the effect we wanted.

However, we still wanted to capture the beauty of the lights at night. We stood on the Bridge for a while watching the light patterns, but we decided that the rainbow pattern was the most attractive.

Our original gif (without added color) looks like this:

Finally, we decided to play with color instead. This link (http://www.colorcube.com/illusions/chrmadptb.htm) provides a good description of what we wanted to do with color in our project.

Ricardo and Everi filmed and edited the video while Nazlı did the sound.

We had complicated feelings about this project. The gif is of a bridge with different colors;  both because it is lightened and also because of the effects. However, we were really hoping to capture the experience of being on the Bridge with a 3D representation of it (a set of stereoscopic videos to be viewed in Google Cardboard). Our final outcome was not as impressive as what we were aiming to achieve.

Furthermore, we could have added more opacity to the colored filters to enhance the chromatic adaptation effect.

However, we do find our material to be beautiful because it does capture the stunning rainbow lights at night. The looping of the rainbow lights seems endless, which makes our work interesting. In "poeticness" our inner critics are satisfied; we captured something we find beautiful and symbolized the connection between art and technology in both the visual and audio components.

The audio was not as pleasing to the ear as we hoped in the beginning, but it captured the theme well.

Considering that we were unable to carry out several of our original project ideas due to a limitation from our available technology, we could have considered that before we attempted the projects in order to have been able to save ourselves the time and effort. This would have allowed us to have an even better outcome to the project that we actually did make, perhaps in the form of a stronger chromatic effect or a better medium to connect the sound with the gif.
It was also a new experience having to plan out the two aspects of the project, auditory and visual, as a group and see how we could get them to interact with each other most effectively.

I definitely enjoyed your product and liked how you guys took a creative spin on a part of CMU that's so symbolic. It's very aesthetically pleasing, and the sound definitely fooled me at first.

When it comes to your use of Shepard's Tone to make it seem like the sound is getting faster, maybe you can also take a look at Scale Illusion or Tritone Paradox to add more distortion and will accompany the same scale and climbing effect like the bridge.

Concerning revision, I think you can experiment more with the visual illusion. I was definitely fooled by the sound illusion and understood it's connection to your piece, but the color illusion just seemed like a filter to your visual aspect.