Made by Sky Ding, Joanna Baranowski, MinSun Park, Stephen He and oadebayo

A performance that uses chords played on a Ukulele to select between colors and determine the performer's actions.

For this project, we will project a grid of dots onto a wall. Using an ukulele to play different notes and patterns, we will determine the performer's movements. In particular, a specific note and pattern will signify to the performer's which colored dots to touch. We hope to take this concept and make it into a game that resembles twister, but on the wall.

For this project, we’re going to incorporate interactivity into approximately 3 minute long performance. The performance will comprise of an ukulele performer, a singer, and background screen playing beautiful patterns corresponding to specific notes of ukulele and voice. The interactivity comes in two ways: when the screen interacts with playing notes, and when the singer and ukulele play together in harmony. We’ll be implementing the interaction with screen by connecting an electronic tuner to the ukulele and use an application to project the changes onto the screen.

What we need for specific implementations are: 1) We should find an application that could reflect the changes of notes from tuner onto the screen using visual patterns, 2) We should decide on a song to play and practice harmony, then 3) We should find a way to get a light to shine on top of the performers to emphasize them, and 4) We should find a couple of videos to play in the beginning and at the end of the performance for fading in and fading out purposes.

Beginning: Black screen( maybe start by playing several notes, and projections for these notes can be something like ripples or water drops)

Ukulele starts playing: screen brightens up from the center( behind where Joanna’s standing) and different patterns start to appear

Different patterns are projected on the screen corresponding to different notes

Singing is added to the performance: Projection can kind of interact with each other( left screen and right screen)

Together: Ukulele and voice of singing creates a harmonic pattern that leads to the end of the performance

New Story Board Found Below: 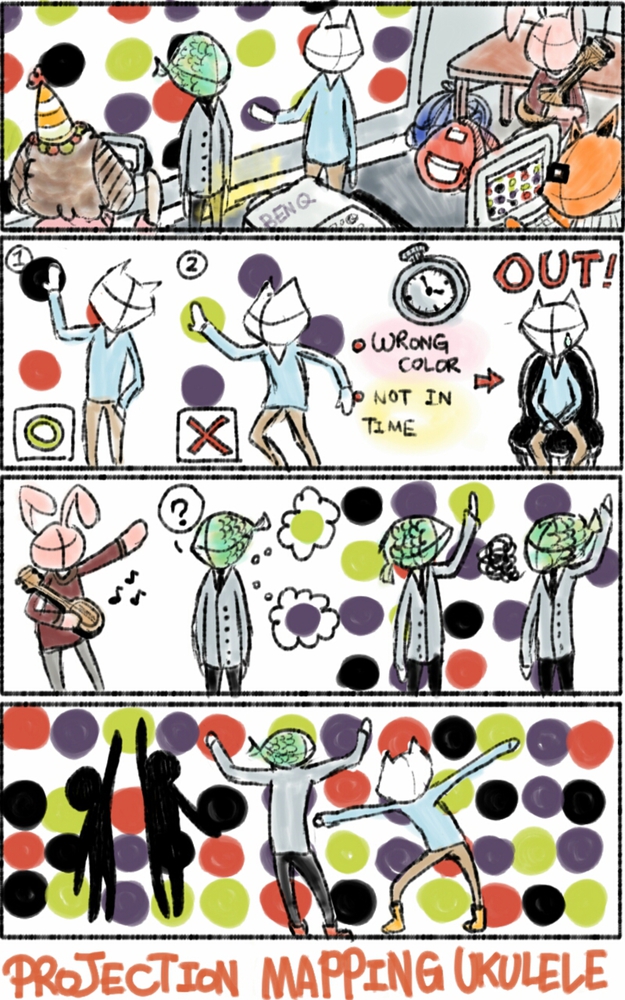 We intended to have a playful game similar to twister...except with a twist (oh the puns). We included sound in the game to add to the difficulty and interest. We were motivated by twister because it seemed to fit the criteria perfectly: it was indeterminate and funny. But, to make this more tangible, we had to change the rules. Clearly the rule that whoever falls loses wouldn't apply because the players were already on their feet. So, we implemented the rule that you had to trust your ears and pick the correct color that corresponds to whatever was played on the ukulele. Our goal was to create an interesting and humorous game.

We performed in front of class with the help of two volunteers. Using a projector, we displayed a grid of colorful dots on a white curtain. The grid of colorful dots was created in python using Tkinter graphics package. The grid was represented as a 2-D array with each cell being a color. Using a random number generator, the program chose 1 of four colors for each cell to generate the grid. A new board was generated every round. Based on the random selection from one of the chords, the program would cause all incorrect dots to disappear after a certain time. A new board was generated every round.

In our performance, we first demonstrated how the game worked by playing a chord on the Ukulele and having a performer select the correct color. We went through all four chords so that everyone could hear the difference between them. Finally, we invited our two volunteers to play against two of us. With four of us, we wanted to emphasize the potential chaos that ensures between players. Each round, the number of dots for each color differs, and based on how many people are playing, there can be an insufficient amount of dots for all players to choose. Therefore, the emergent outcome comes about by the players trying to tactically misdirect or choose their colors before any of the other players can. Different outcomes depend on each player's selection.

Twister was our biggest inspiration for this project. We were also encouraged by works like Connected Worlds, where people interact with projections on the wall. Although our project was not nearly as technologically advanced as Connected Worlds, we were inspired by the idea of interacting with objects via projections.

We were also inspired by different works such as Projection Mapping Cello. We wanted to re-contextualize a common, everyday wall into something that could be exciting by using projections. I believe we have been successful on this front, turning a wall into an interactive game.

Together, we decided that our project would involved projection on to a wall. Initially, we wanted to have the ukulele determine the the patterns that would appear on the wall. For example, each note would cause a different result to be projected. However, we felt that within our time constraints, this would not be possible to do well. Therefore, we decided to do the opposite- changes in our projection will determine what our ukulele will do. The end result is that randomness can be determined by the program itself.

To build our concept, we decided that we wanted to have the audience be able to interact with our work. Since we were using an instrument, we decided to limit ourselves to four very distinct sounds, because to those who are not musically inclined, many notes can become indistinguishable. The concept of the grid of dots came about when discussion interaction ideas. We stumbled on the concept of twister, a familiar game to many people. We adapted this game of twister to fit format- four distinct colors that are randomly generated through the whole grid rather than in columns.

One design choice we had to make was in regards to choosing what colors to use. Since we  were using sounds to dictate the play of the game, we wanted to somehow connect the colors of the dots to the music. Therefore, we first started with the selection of notes, and then tasked ourselves to come up with the best color that embodies that note. For example, for the shorter note, we chose red because red is synonymous with face-paced and passionate emotions. Hopefully, with some time, players will come to recognize the notes as colors themselves, even without explicit direction.

We also had to decide what shapes to use for our pattern. We initially thought of squares because squares create a much more defined grid. However, we realized that squares do not seem as inviting. Circles, on the other hand, have a direct link to games like Twister, so we decided that that was a better option.

Briefly outline what you took away from this project. What did you learn? What would you do differently?

I have learned that in organizing an interactive performance, there are a lot of factors that you have to consider. Not only do you have to consider what is feasible to do, but also you must consider what the audience is thinking when they see your performance. Balancing both the audience and creator perspective to make sure that both are satisfied was a fun challenge.

One thing I would have done differently is add more elements that encourage chaos. For instance, if the number of dots decreased each round, there will be fewer and fewer correction options each round for people to compete over. This way, we can ensure that there will be competition and that there will only be one winner.

We could have also increased the chaos by allowing for more smooth transitions between choosing a new color and playing a round. This was because a color had to be chosen first, and then the ukulele player could begin to play. If we replaced the ukulele with digital instruments played by the computer, we can reduce this intermediate wait time to almost nothing.

I think that we could have experimented more with what sounds we were using. In particular, using other sounds than just an ukulele might have made the sounds more distinctive and thus easier to comprehend.

Critically evaluate the success of your own work. What does your inner critic say about this work? Did you match intent and outcome effectively? (note: use the framing questions to guide your response!)

I believe that we were successful in our work. I was proud of the fact that our performance was truly interactive. There was no difference between us, who were performers, and the audience, who participated with us. We bridged the gap between audience and performer by allowing the audience to perform the same tasks as us.

I do, however, believe there is much to be improved upon for this game. For instance, if there is no one to demonstrate or explain how the performance works, will people understand what is happening? This could cause issues when trying to purpose this performance as an interactive piece at the Children's Museum, for instance.

I want to continue to work on this project, and add many of the things we discussed in the group reflection. In particular, I feel that replacing the ukulele is imperative to iterating on this design, but at the same time it removes some of the interactiveness of the work.

Cite and attribute any sources you used directly in your project. Document this carefully: be very clear about what media you worked with, where you found it and how/where it was incorporated.

Code for our grid is below:

I think you did a great job using the instrument to interact with the audience. The way you carried out your performance in the form of a game is well-designed. It encourages the audience to actively remember the rhythms and participate in the performance. I would suggest that you add some special animated effects to your colorful circles so it can become a beautiful art piece.

A performance that uses chords played on a Ukulele to select between colors and determine the performer's actions.