This project will explore the ways people interact and relate through media devises and how these interactions can be used to mis-acurately portray our lives.

Our project was a multimedia performance depicting the potential for dishonesty in digital interaction. Two individuals separated by a divider were communicating by text message and phone apps while projections on the wall behind them displayed there conservation. One individual was at a party and trying to convince their friend to come, who was at home and texting them misinformation to get her off his back. The text conversation was recorded beforehand, and music was added in premiere pro to indicate who was texting at the time, Shots by LMFAO for the girl at the party and Piano Concerto No. 21 by Mozart for the guy at home. The videos were played as projections while the actors mimicked the actions of their characters live.

The point of this project was to depict the potential for deception when communicating digitally. As seen in the project, the guy keeps telling the girl that he's too busy to go to the party, when in reality the audience can see he's just lazing about. Similarly, the girl tries to convince her friend how much fun she's having when the audience can clearly see that she is bored and not at all having a good time. The lack of physical interaction when using digital communication allows for a greater distortion of information; the individuals can't verify the information the same way they could in person, allowing them to say whatever they will to convince the other person.

We chose to focus on this particular aspect of media interaction because every one of us uses media to interact with others on a daily basis, but we recognize that these interactions may not always be honest. At CMU, for example, its relatively common for students to

We started on the basis that we wanted to use social media and instant messaging to be able to be "unspoken with words". In this way, we wanted to avoid either of them saying anything out loud for the entire performance. A great deal of what informed the process was our daily college lives, as this scenario is a typical one for many college students, either on the side of the home-body or on the side of the party-type. Many other works in the field try to grasp the intricacies of social media and how that has altered our daily practices and interactions.

Many other works have focused on texting and communication. There was even a similar work presented after ours involving texting. A few are shown below.

The first one is similar to ours in that it highlights that people often are not in the environment that they are in when they have the outlet of texting to take them out of that environment.

The second one shows how we can draft our texts and alter them to portray ourselves differently. The girl is clearly very eager to reply to her crush, but "plays it cool" by constructing the perfect text.

The third one is simply another instance of using texting as a medium. This artist chose to portray what a dog would say if the dog could text. 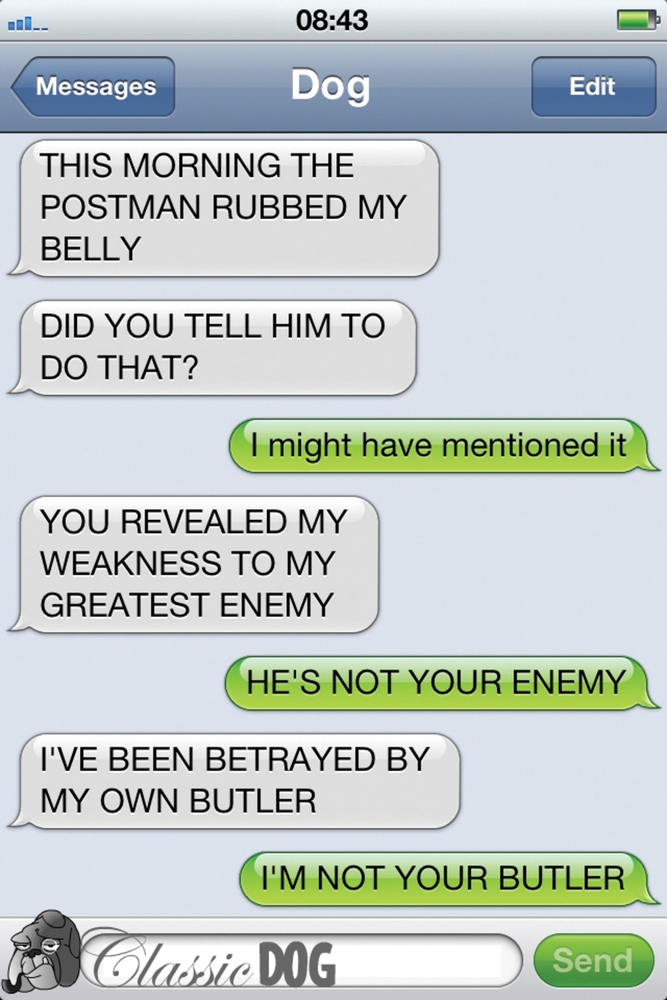 We began this project by creating a script for the characters to follow. After switching around the roles several times, we recorded two videos - one of the laptop screen of the person at home and one of the phone screen of the person at the party. Using built-in programs on our computers, we were able to record these videos then used Adobe Premiere Pro to cut and sync these videos together. Finally, we added audio tracks to both videos and synced the tracks such that one was playing louder when that character was completing an action and quieter when they were not. 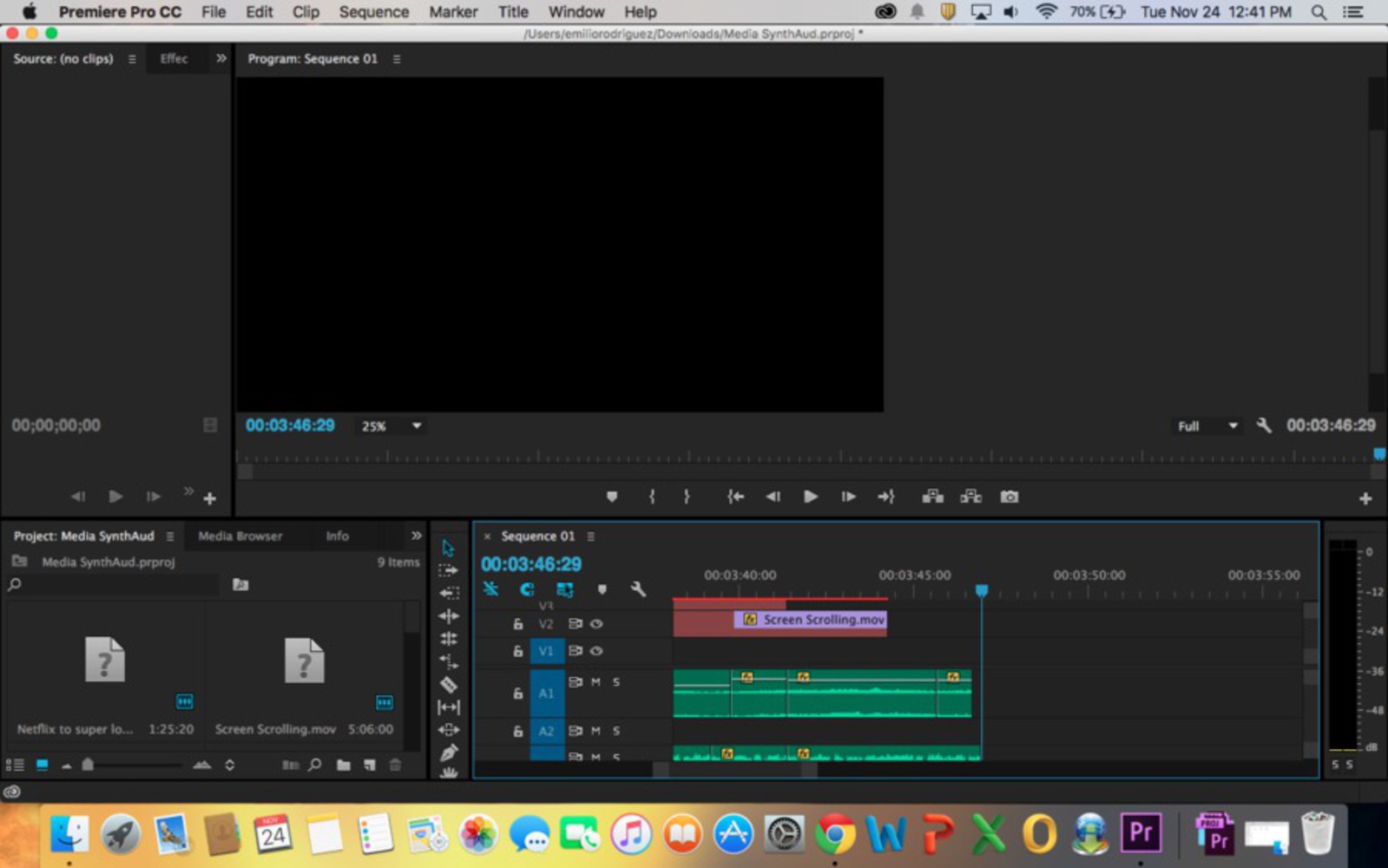 The idea for the project (two individuals texting each other with conversations projected for the idea to see) was thought up by Sophia. Everyone in the group refined the idea from that point (having one person be at a party and another at home, having the computer screen projected, etc.) as well as worked on the texting "script" for the piece. Emilio and Melissa recorded the texting conversation video and Melissa recorded the computer screen video. Sophia and Jessica worked on putting adding music to the videos and premiere pro and making sure the music, the computer scrolling,  and the text conversation matched up. Emilio and Melissa acted out the roles of the guy at home and the girl at the party live.

Reflect on the process of making this project. What did you learn? What would you do differently? What does your inner critic say about this work?

Jessica: I'm satisfied with our outcome. I learned more about how to use Premiere to edit sound during the process. I had some struggle with deciding the timing of the music because sometimes both of them are typing and I was not so sure which music should dominate. But I think the sound came out fine. For the last part of the performance, we first plan to let the girl at the party go home and going to sleep while still pretending tho be at the party. Eventually we just showed she left the party. So I think it might be a bit confusing for the audience why the party music suddenly disappeared. Overall I think we've done a good job. This interplay is interesting and presented our intention well.

Emilio: I'd say I'm satisfied with our outcome. What I mostly learned working on this project was the importance of matching when editing various forms of media. Getting the videos and the sound to match up along with playing them all at the exact time to having everything match correctly was a challenge. When practicing the performance, it was difficult to match my physical movements with what was supposed to be going on in the videos. If I was doing this again, I would probably look for a better way to make sure my movements match up with the videos being projected.

Melissa: I enjoyed this project, especially in recording the laptop scrolling and text conversation videos. Synching the videos on Premiere was also interesting because it helped me to learn tools in Premiere. While we did practice the performance beforehand, I felt that my timing was a bit off during the performance.

Sophia: Overall, I liked our project. It was another great experience to mix ideas together as well as sound and visual. I think we had a great concept, as lying without facial expressions or “tells” is a very interesting aspect of our lives today. My opinion is similar to Jessica’s because I also mixed the audio together, and found it hard to find the right spots to switch the focus from the party to the person at home by making one of the atmosphere’s songs louder than the other. I liked that we had two different “rooms” to look at, at the same time. I think it created a very engaging piece, which I think is the part of the purpose of performing art. It was also a great new experience to rehearse the piece, as we had to work on timing it and figuring out the right environment for it. And lastly, this was the most technologically involved project I’ve done, so it was a great experience to know what it’s like to prepare the technology beforehand and on the spot for the timing of a live performance.

2. Piano Concerto No. 21 by Mozart https://www.youtube.com/watch?v=CL3FuOJbHLg

The show was so funny. I really like it! And it was very entertaining. The way that use background video to show what is going on on the phone screen was very good and funny. I really enjoy the comparison between what's going on on the screen and what people are actually doing. It's very sarcastic and funny. From my point of view, maybe another less noisy music will be better because when I look at the show, I think the music was kind of distractive. Anyway, the performance was soon good!

This project will explore the ways people interact and relate through media devises and how these interactions can be used to mis-acurately portray our lives.