Made by Sky Ding and MinSun Park

An installation that translates music into tangible projection art by visualizing rhythm as the motion of fish.

Our work developed from analyzing a song called YumeUtsutsu, by YoshiMori Makoto, and we thought the perfect representation of this song would be a fish gently swimming around in an illuminated river while the river is surrounded by darkness.

The title of our project was adapted from the term Schrödinger's Cat, which refers to a paradox where a cat is trapped in a concealed box with a bottle of poison, but one cannot predict when the bottle opens and thus kill the cat. Therefore one can see the cat as simultaneously dead and alive as long as the box is not opened. So in this installation, the reflected shadow of a fish on the screen can be both real and fictitious. You’re invited to peek inside to resolve your doubt! (We know you’re going to figure it out at once without looking, but what’s the fun in that?)

We intend to create an installation that's going to express how we feel when we hear our chosen piece of music by simulating an experience of uncertainty based on the famous thought experiment "Schrödinger's Cat." The plan is to have a glass fish bowl half-full of water standing on a stool in a dark room where shadow of goldfish swimming randomly is going to be projected on the floor directly under the fish bowl while the music is playing. The idea is to create a feeling of surrealism where the fish shadow swims around while there is actually no fish in the bowl. A box will be placed outside of the bowl to hide it from direct observation from the audience, so that the audience could only see the shadow of the fish on the ground, and guess "Is there really a fish in the bowl?" Of course, there isn't, and the animated fish video we made wouldn't be that realistic, but the audience may also think this way, "What if there really is a fish?" The thought process before people really step closer to the bowl and seek answers for themselves brings the limit of possibility to a higher level, and this is exactly the message we are trying to deliver: You could believe in anything before you truly experienced it.

My style was greatly influenced by the goldfish installation in Art Aquarium, Tokyo, the untitled light bulb art created by Myeongbeom Kim, and Fish Harp. The idea of visualizing rhythm by simulating goldfish swimming motion came up when I saw how the fish in Fish Harp plays a vital role in creating randomness in the resulting melody. Why not make it work in the other way around? So I decided to project random goldfish motion while the music is playing. I got the idea of projecting through a half-full glass fish bowl from both the light bulb art and Art Aquarium. The use of glass seems to create isolated spaces for each installation, which from my point of view, represents a unique world. I decided not to put real goldfish in my fish bowl because I want my installation to capture the feeling of something intangible hanging out there; it seems that the music can be forming certain shapes but I'd like them to be more obscure, meaning that I don't want them to be distinguishable directly upon sight. This is why I chose to project the shadow of goldfish without colors or detailed patterns. 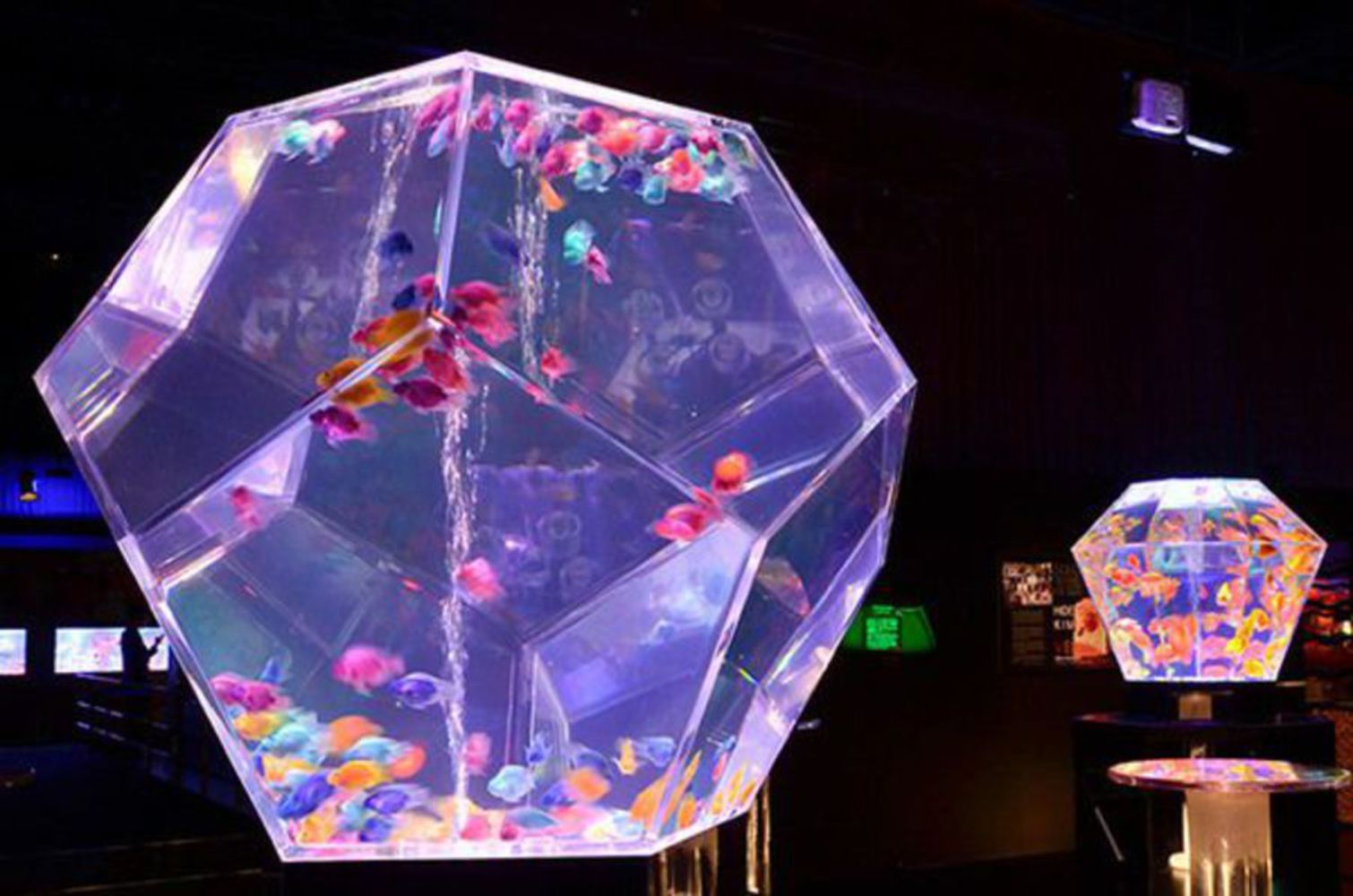 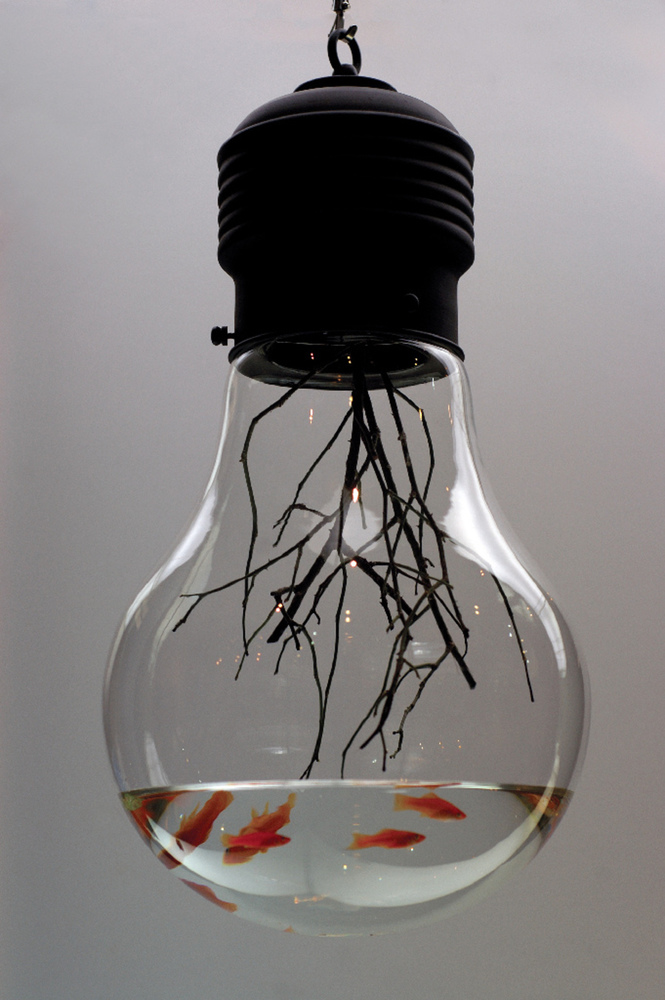 We made a rough sketch of how we want our installation to be set up. We are going to need a projector, a translucent glass fish bowl, a stool, speakers, and a laptop. The projector will be placed at the best angle with the fish bowl, even though we are not sure yet how the presence of water in the bowl is going to affect the quality of our projection. 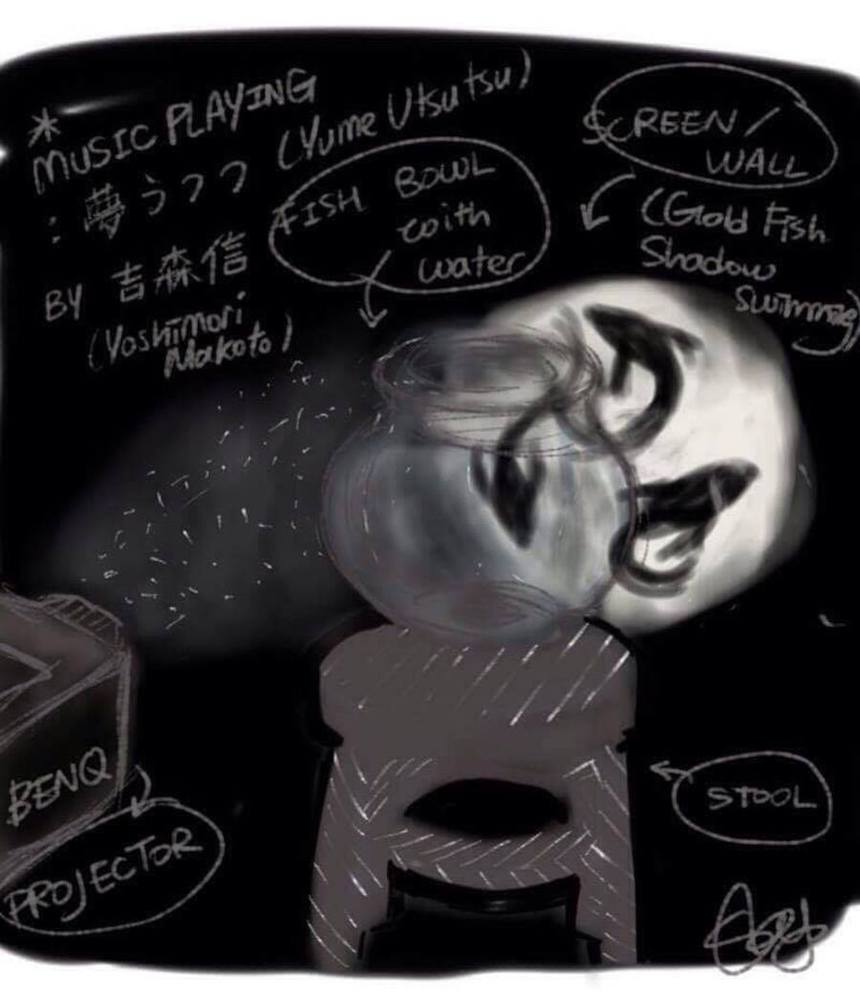 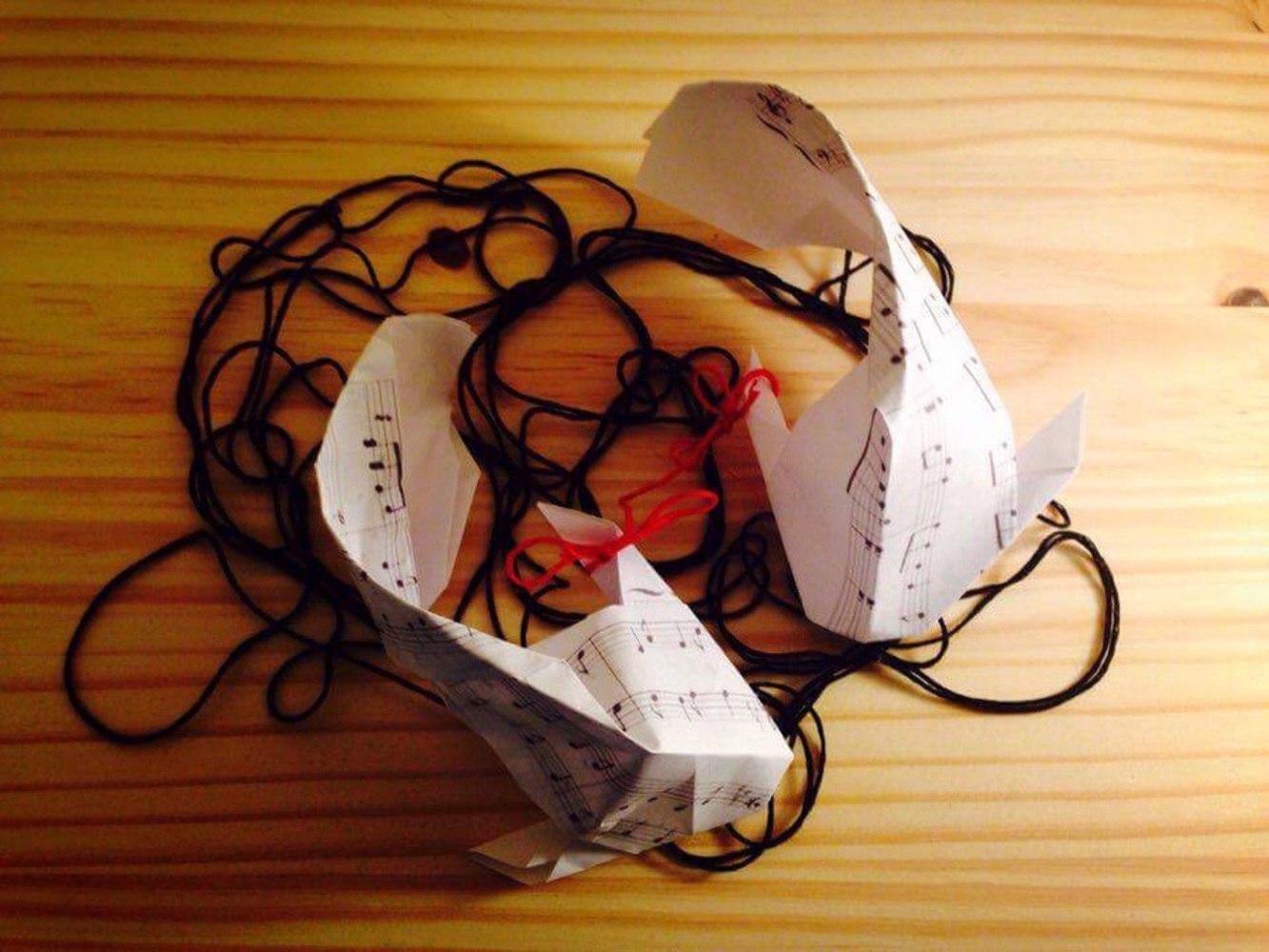 After reviewing the feedback we got from other people, we decided to put the idea of creative coding aside just for now and see how determinant fish swimming looks. So we picked a video of hologram fish ( not a gold fish, unfortunately) swimming around, and then we processed the video by inverting the colors first from a black background to a white one, and then blended with the original video to around 50% to make the background color grayish. Next we added a color replacement effect on the video and replaced the orange on the fish with black. We scaled up similarity and there we got our fish shadow. Couple more things we could do later are, first, add more fish to the video; second, make the transitions between the videos smoother; third, match music rhythm with speed of fish motion.

After desk critiques and peer reviews, we met up a few more times to develop our idea more in depth. And then we finally came up with the revisions shown below in the sketch and the new animation. First, we decided to incorporate the concept of "Schrödinger's Cat" into our project, so we added the box that covers the fishbowl on the sides. Second, we decided to have the fish shadow project on the floor instead of on the wall because we want to hide the projector from the audience's view. Third, we decided that we could use videos of more than one kind of fish, and instead of restricting ourselves to goldfish, we thought that including something "surprising" in the fishbowl might turn out to be an interesting experience. So we added hologram videos of shark, jelly fish, and even a butterfly in the end. As the projection of the video goes on, we wanted to show the audience the decreasing possibility of a real fish presence in the fishbowl, so in the end the butterfly kind of reveals the answer since there could never be a butterfly underwater in the fishbowl. We also didn't forget that we wanted to create this delusional kind of environment where the beauty of the music and the projection could be combined and furthermore, make people wonder what message we are trying to deliver. 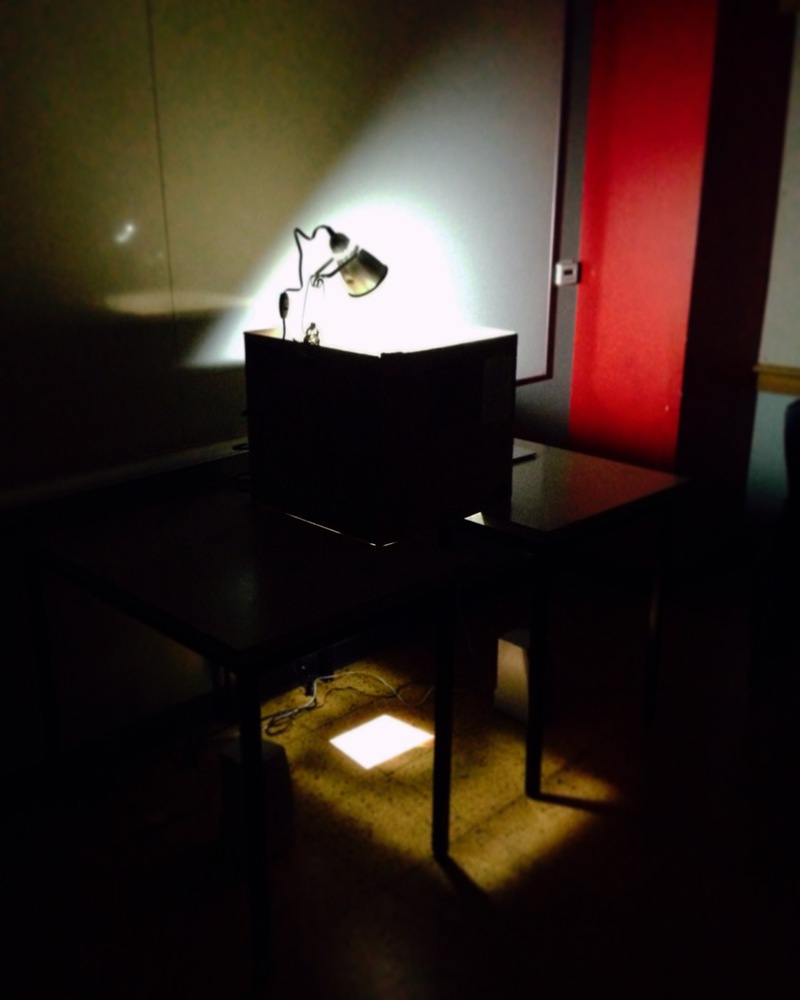 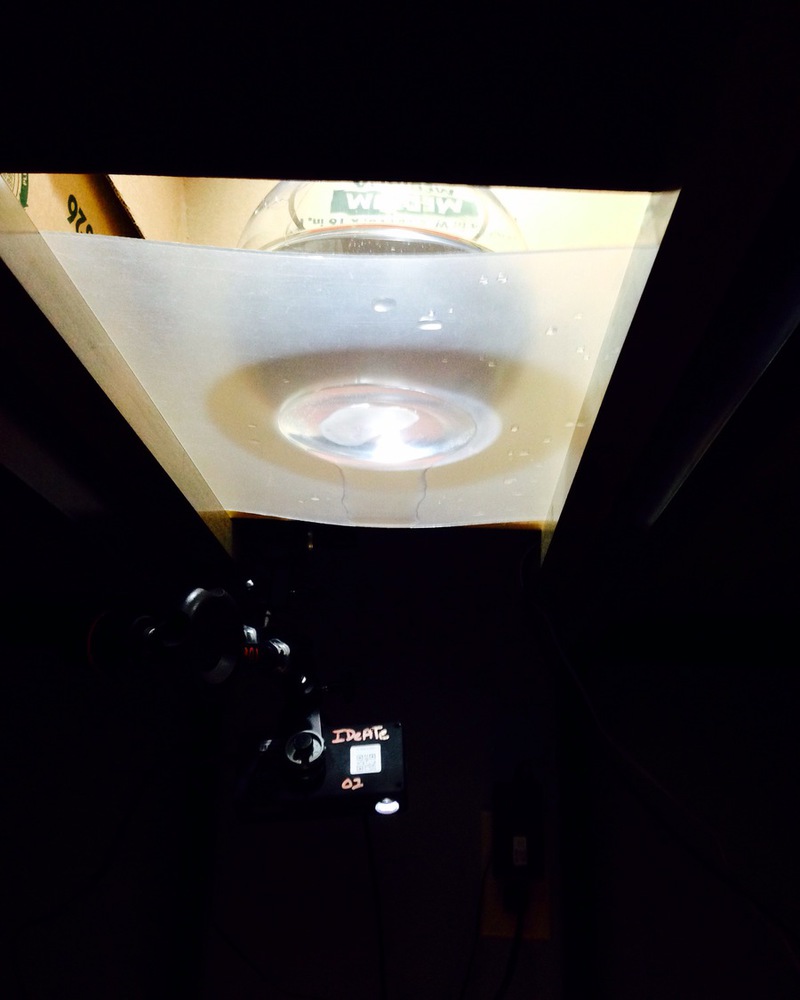 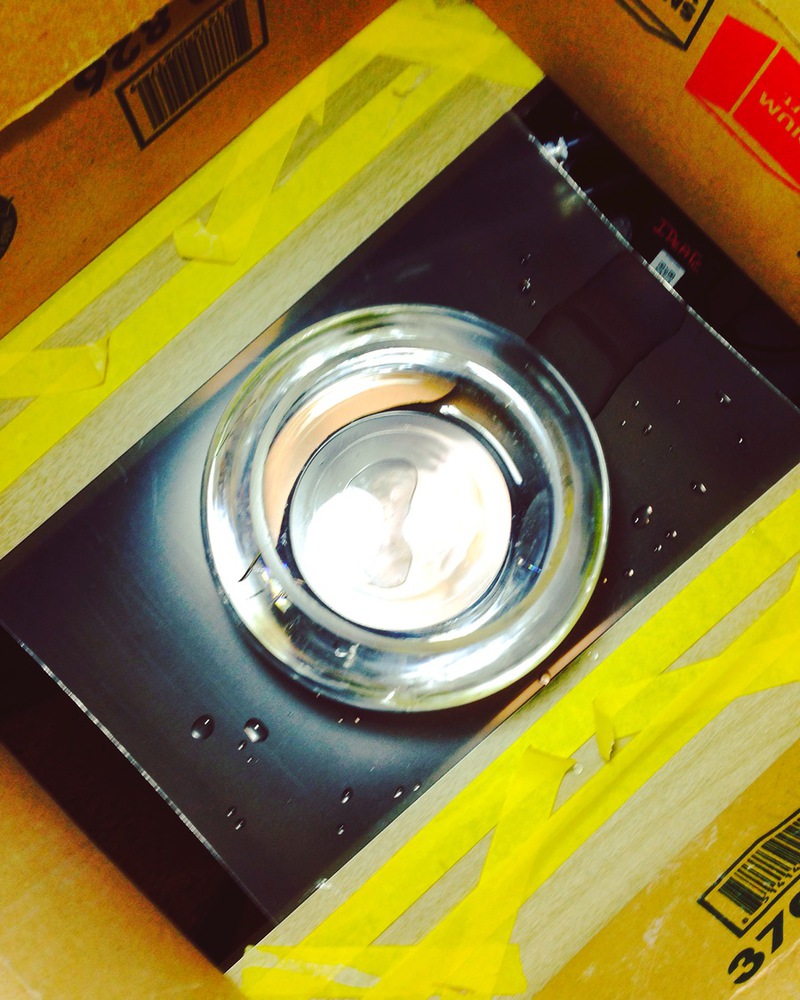 I thought I would reference this work, as it contains almost all elements of what we're going to install: goldfish, water, shadows, and light effects. This work was created to represent the busy city in China using 1,500 goldfish in numerous, huge tanks. The number and the size make the work very interesting, but the artists also gave lighting effects so when in the dark, shadows swim beautifully across the tanks.

This small installation is simply made up of several cardboard fish in existing fountains, but they're beautiful and I really liked it. They're environmental, and it doesn't involve sacrifices of poor fish. Instead, they give you an illusion, or just a feeling of fish swimming around in a fountain, which is exactly what we want to implement!

This installation is exactly what we want to convey: the illusion through shadow playing. The Shadow Art portrays shadows of humans on the wall, and if you take a look at it, you can't be mistaken; it's definitely real people that are reflected on the wall! But actually, they're not; the shadow is made up of different materials that look nothing like a man. We want to learn from this installation to create our own illusion.

Describe the process of collaboration. Note what contributions were made by each person. How did the collaboration work? What roles did each of the team members have?

In terms of collaboration, we didn't have specifically set roles, as there were only two of us. The initial idea was from Sky's warm-up exercise that she did in class, then afterwards, we met both online and offline to provide ideas on how we should implement the installation. It was a fun process trying to come up with various ideas, especially since we talked frequently. Even after the first-cut installation, we modified our installation and asked professor Daragh for advice, then we fixed it again. We both also took part in buying the materials, as they were quite expensive. Overall, this final project didn't only took up a lot of time, but it was also really fun!

What does your inner critic say about this work? What did you learn? What would you do differently?

We went through lots and lots of trial and errors. Although we drew several sketches, thought about how to implement the structure pretty thoroughly, and prepared a lot beforehand, we still had to go through many troubles. One of those was regarding candles. We bought a pack of floating candles and we lit them up on water as soon as the installation time began, but they started to melt too fast that they were about to disappear entirely. But afterwards, we were told that we weren't allowed to put up candles, which was our original plan, because the library staff asked us not to do that. The candles were pretty important part of our installation, so we panicked at first, but we got through it.

We had lots of other errors that we had to fix, and from these exercises, I learned that installation work, unlike a static artwork, need lots more trial and errors than I ever thought. Our idea was very original and yet simple. So I thought it wouldn't take long to install it. But after encountering multiple problems on our way, I learned that it isn't as what I thought it would be.

If I had more time, I would've made a video with multiple fish swimming around. We were restricted to one fish because in the feedback session, we were told that making the interaction among fish would be extremely difficult for our level, so make it just one fish. However if I had more time I would've learned how to do that and implemented it. That would've made the installation more fun!

Project Cover Image: Out of the Blue, Samy Charnine

I really like the idea behind this project. I think the idea fits very well with the song that you chose. Definitely has potential to be a very interesting and mesmerizing experience. I will say that to get this right and polished will involve a lot of testing with how materials refract the projection, which angles are ideal viewing, etc, so there are a lot of variables to deal with. I like the idea about adding indeterminacy with coding fish, but I think that this is a lower priority work item. Try to focus on the simple things first to get more of a idea of how the project flows. That way if you wanna incorporate something more complex it'll be easier to see how it is going to fit. Overall though good job! I really look forward to seeing how this turns out.

An installation that translates music into tangible projection art by visualizing rhythm as the motion of fish.