Perform a sort of choose-your-own-adventure, shadow-puppet performance with people

Our performance aims to present a “silhouette performance”, simulating a sort of shadow puppet show, but using media to help carry out the context and plot. We will project text (shown by a traditional iMessage conversation) against one side of a white sheet. On the other side, we will have 2 “actors” whose silhouettes will be cast against the sheet by a bright light behind them. We chose this method of performance to sort of emulate the nostalgia of a shadow puppet show, and we also wanted to explore how media and technology - in particular, a more modern medium of interaction over technology - could play a role in a traditional story.

We chose The Little Mermaid to be the story we present, but we also added a twist to it. In order to add unpredictability and audience participation, we are going to encourage a choose-your-own-adventure type plot. We will have different breakpoints in the story where the audience can choose what route to follow, which will then change the resulting actions and final ending that we perform.

A sketch of the idea is shown below. 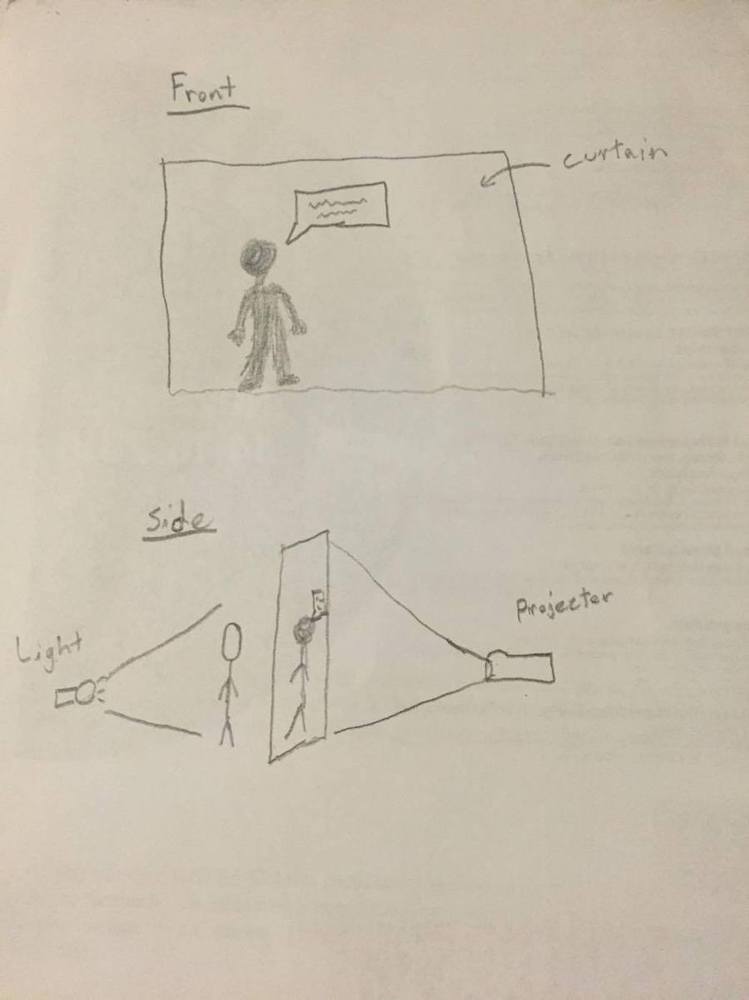 As far as technical setup goes, we used a large white bed sheet as the “curtain” to project against. We hung it up using two whiteboards for support, creating a rectangle of space where the audience could see both the projected “text” conversation as well as the human shadows behind the sheet. In front of the sheet, we mounted a projector on one of the black stands and used that to mirror the display of one of our laptops, which we used to type messages in our story’s conversation. Behind the screen, we set up a bright work light to cast the silhouettes against the sheet.

Unfortunately, one of our group members was not in class and the other three members of our group were directly involved in the performance, so we did not get a clear video of our final outcome (this was also an oversight on our part, as we should have just asked another classmate to record video for us). Below is a sketch of the set-up that we had, as well as an image of the text transcript of the outcomes that we performed in class. 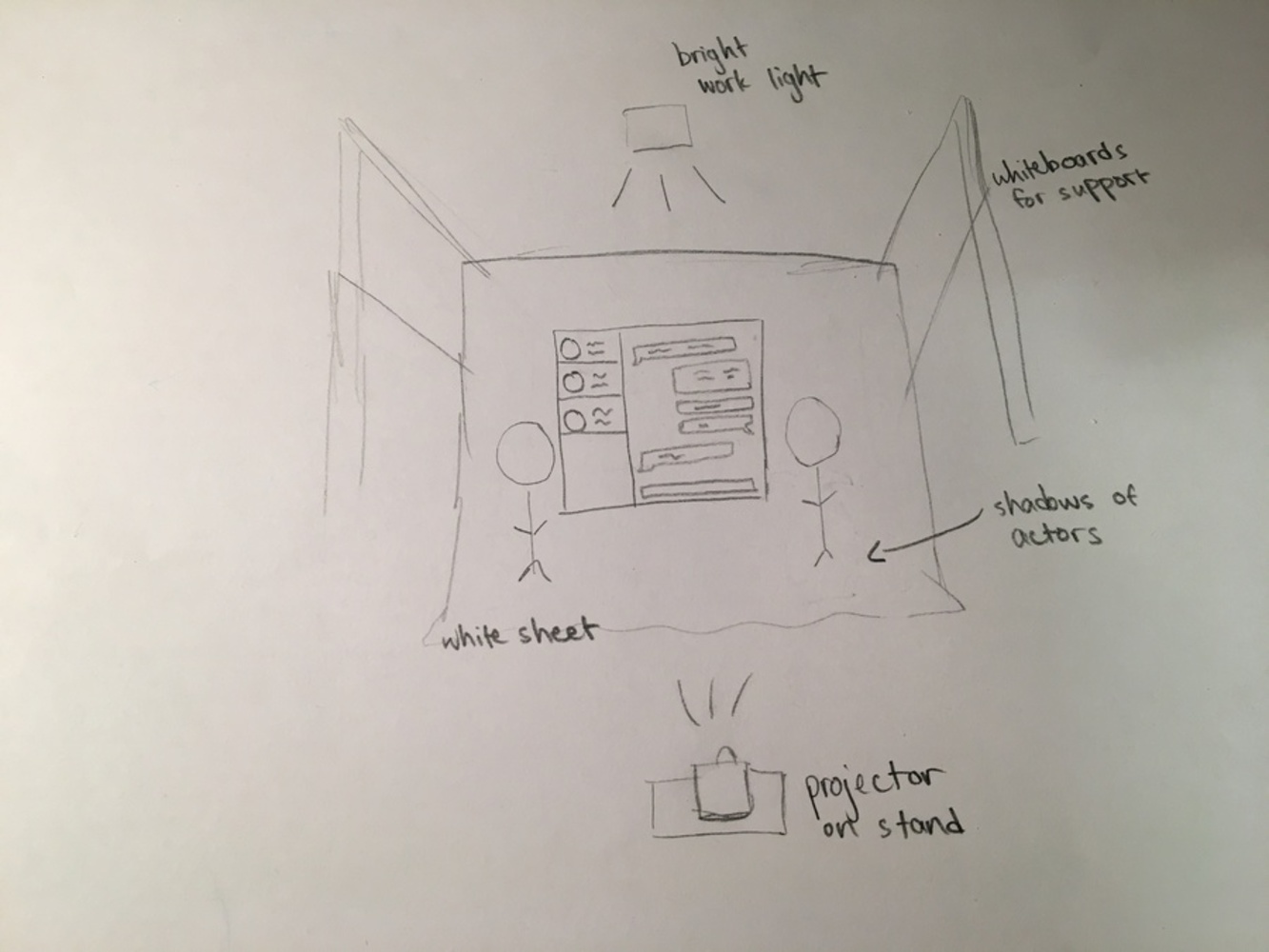 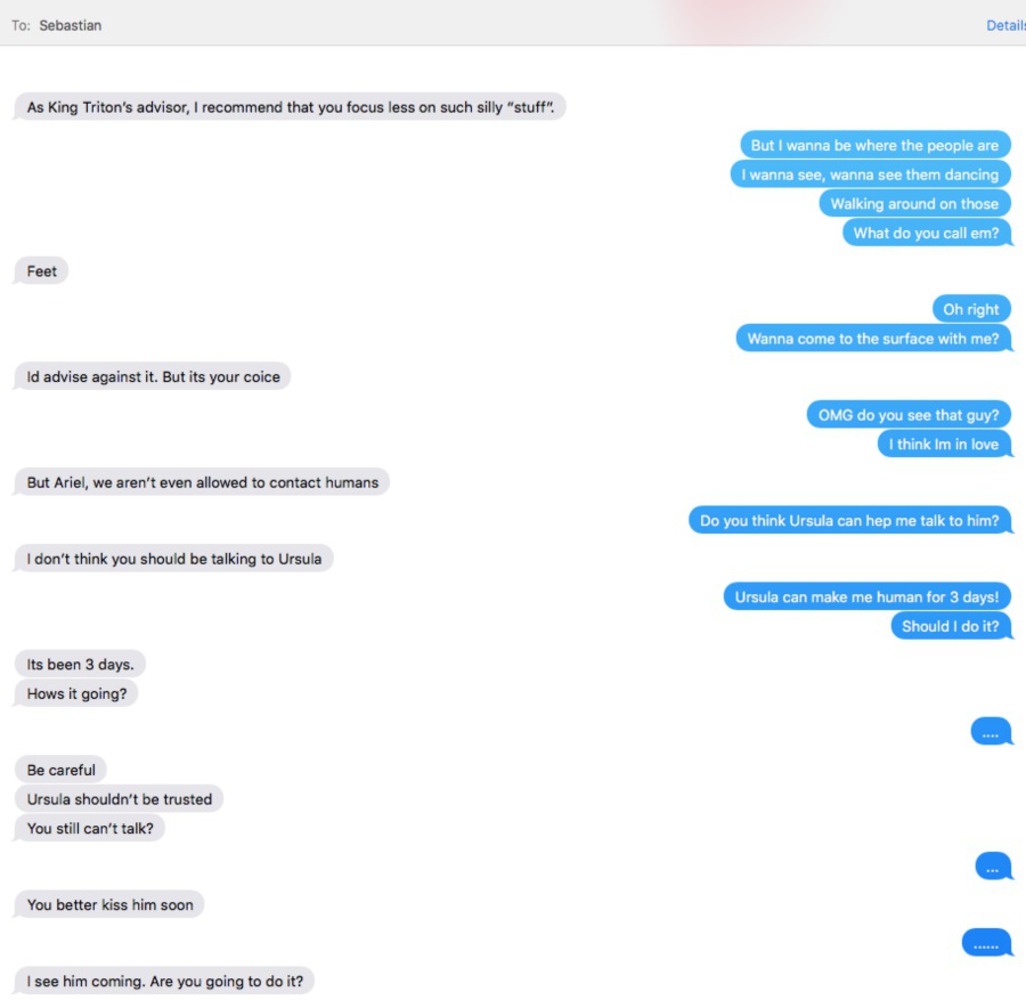 Our main inspiration for the silhouette performance idea was the concept of original shadow plays, using hands or cut-outs as shadow puppets in performances. These performances have been around for a long time, and are long-standing traditions in many Asian cultures. We looked specifically at modern puppet theater performances/venues - one really great example was Beijing’s “China Puppet Theater” - and it showed how the genre has held its shape over time.

The shadow plays generally work primarily with paper and crafts, without media components. A big influence in how we included media in our performance was the Attraction Shadow Theater Group. This group does a spectacular job at combining beautiful backdrops with compelling acting and storylines. Their shows gave us a better idea of what’s required to effectively pull off a silhouette performance. Similarly, we were influenced by the performances of The Silhouettes, a dance troupe of young dancers that perform behind a backlit scene as music plays.

We have attached below examples of each of these sources/performances. 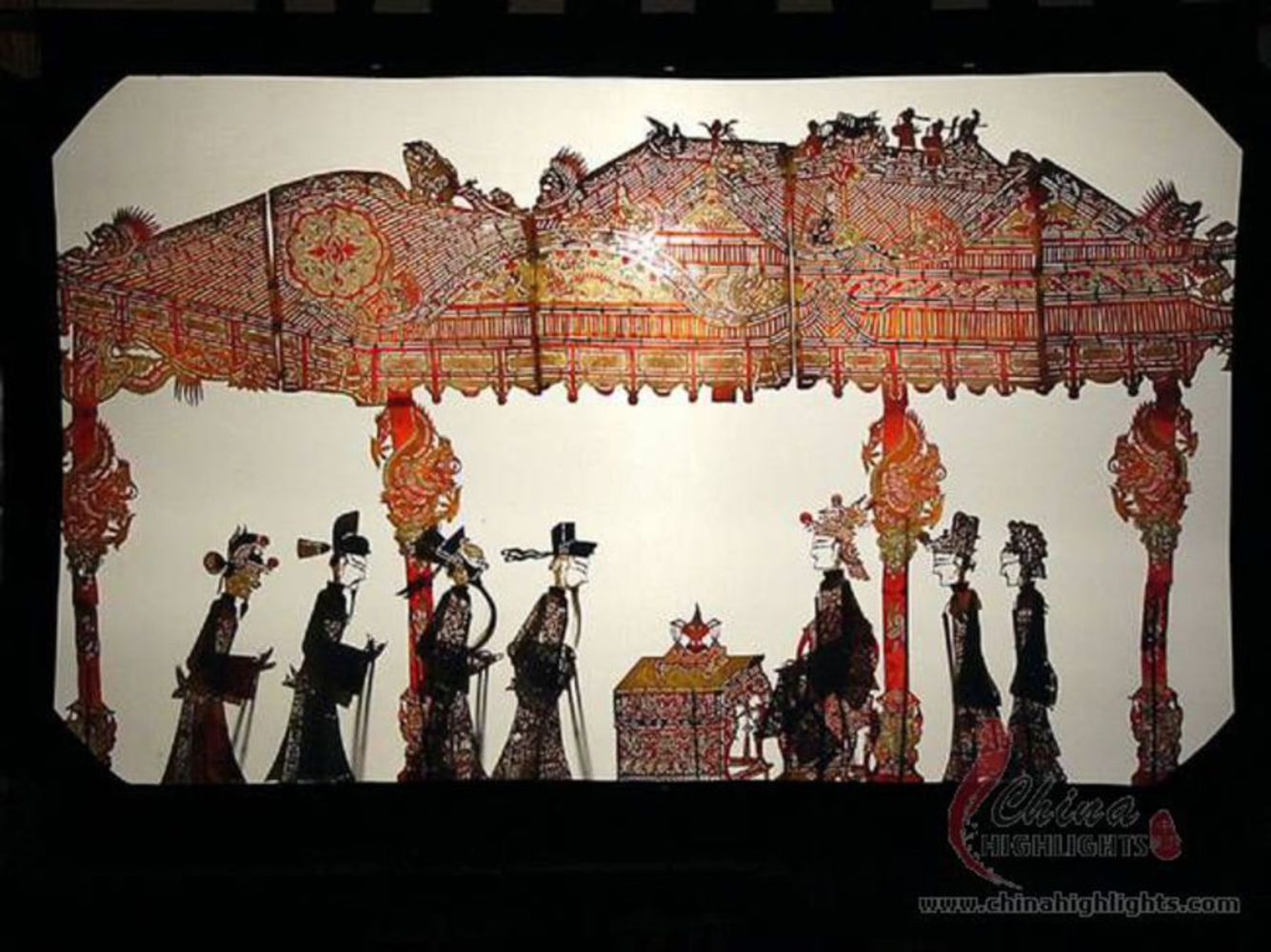 Figuring out how to effectively set up the projector and the backlight was difficult, especially in order to avoid washing out the projection too much against the sheet. This also led us to choose a simpler projection - rather than casting a complex scene against the sheet, we kept it to easily-understandable text.

In addition, we had to decide on a medium for audience participation.. We considered having audience members text their decisions, but we wanted to keep the duration of “choices” relatively short, thus keeping audience members more engaged in the performance. We chose “cards” instead with one side for yes, the other for no. We also limited the size of our participation pool to only five audience members, so that we could have a quick decision and not require large counting of votes.

Below is an image of our voting cards.

The script also took careful decision-making. We toyed with ideas of switching conversations so that Ariel would be texting with Scuttle at the beginning, and then switch to Ursula/Eric. However, this switching process proved to take too much time, and would ruin any immersive experience the performance provided. We ended up telling the story as a conversation between Ariel and Sebastian, as it was the best way to describe the plot without too much confusion. 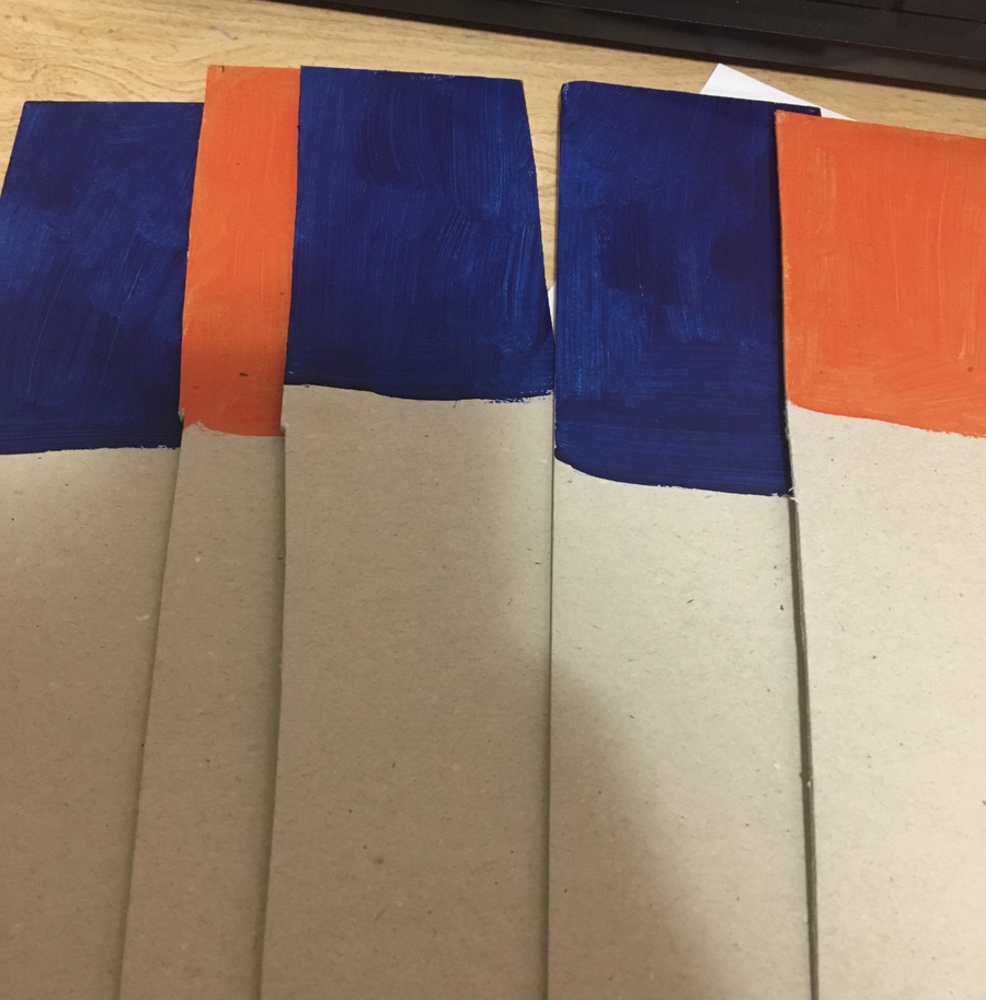 The set-up generally achieved the effect we’d imagined, but not to its fullest extent, as casting the shadow precisely as we wanted it was difficult. We also had issues getting the projector image to match the sheet dimensions, so we could have taken more care in setting up our stage.

The audience participation worked relatively well, but we also could have introduced it more clearly, as there were still a few awkward moments during our choices. This also could be helped by fixing the script to more clearly indicate choices.

Generally, having more manpower and technology available (especially in regards to the phone numbers and text conversations) would have greatly helped our outcome, as it would have better matched our original intention. While having one overall “narrative” conversation revealed the plot explicitly, it would have been more interesting to see Ariel have multiple conversations with different characters, rather than just understanding their implicit effects. For our performance in class, we only had two devices to work with, and only one group member able to control the conversation, so we felt limited in what we could effectively do.

Media performance is definitely different than what we’ve studied before. For one, putting on an effective performance requires rehearsal in order to work out the kinks. Having a full practice run of complete technology set-up, audience participation, etc. would have given us a better idea of which spots might be awkward or unclear to viewers. In addition, since these performances were so unpredictable, it’s necessary to be prepared for whatever situation comes up from audience votes.

In addition, we could have been more clear about audience participation from the beginning. SInce our performance depended so much on audience members understanding the process, it is incredibly important to clarify any misconceptions before beginning.

In a further iteration of this, given that we could work out the technology and set-up imperfections, it would be cool to involve scenes - either image backdrops or short videos - to add more context to the atmosphere and really create an immersive experience. We could also play around with automating the texts, so that one group member doesn’t need to be typing the conversation as we go. Again, this would be another instance where having a larger group size would be helpful.

We based some of our story-lines based off of the original story of The Little Mermaid. In addition, we used some underwater sound effects taken from a Youtube video.

I like the idea of integrating traditional shadow puppet show and media. In fact, our group initially had a similar idea but yours is more improved [lol]. It is definitely a great experience for the audience for they are not listeners but participators in the storyline they are quite familiar with. I think the size of participation pool is really limited since there are only five members. Other people may also want to be part of the interactive performance. But since it would be hard to make a decision if there are a lot of participators and the performance could be displayed multiple times, this is not a big deal. Great job!

Perform a sort of choose-your-own-adventure, shadow-puppet performance with people