Made by Xin Hui Lim, zislamha and Ophelie Tousignant 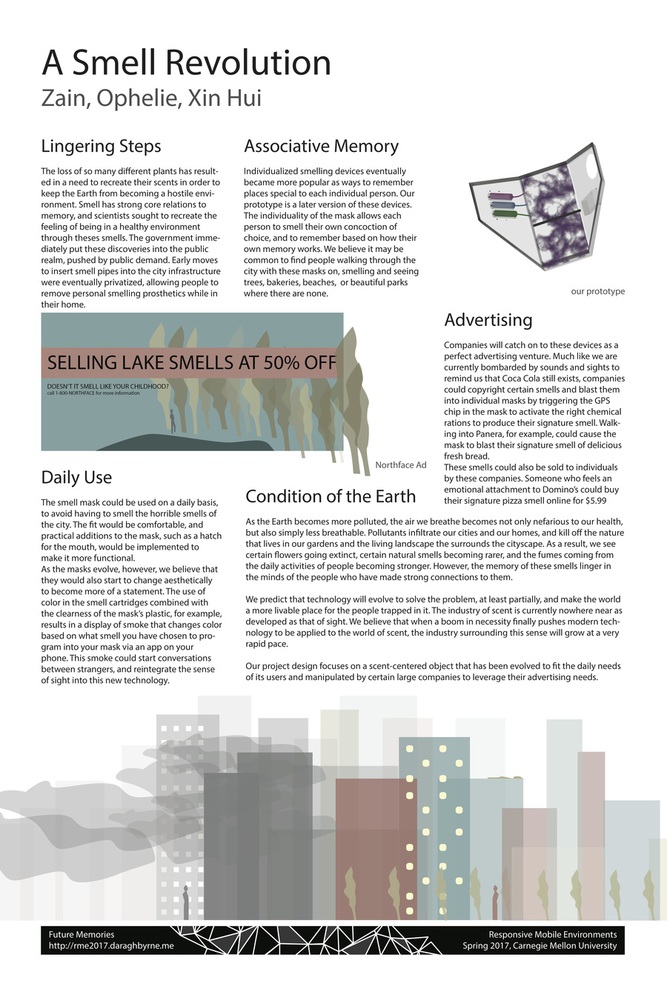 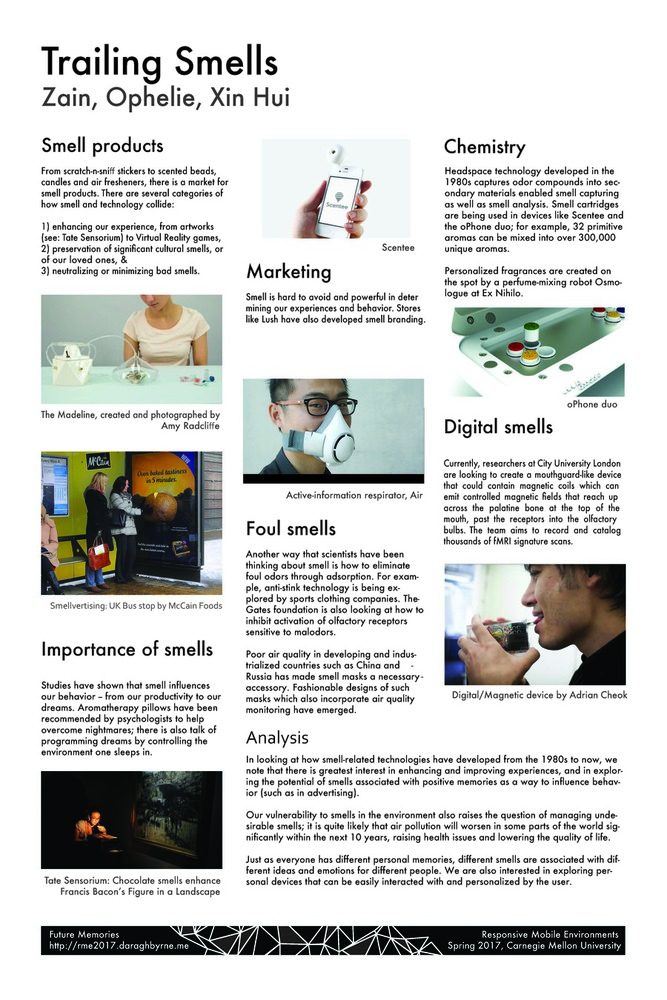 In thinking about the various issues and impact of augmentation of experiences through smell, we considered what the current situation is and what the most probable path of advancement in terms of smell technology would be within the next 10 years.

Today, our sense of smell is becoming increasingly important. From air fresheners to smoke alarms to masks, we see that smell is associated with not only the idea of cleanliness and health but also experience and  personal memories.

We believe that smell is fundamental to the human experience as well as to human memory. While often overlooked, it has an ephemeral quality in terms of how it diffuses and fades away over time and space, as well as because currently the scientific community has not settled on the fundamentals of smell-making and whether or not the millions of scents could be created from a few basic chemical compounds. Other ways of thinking about smell perception is perhaps the nerve receptors -- the question is perhaps whether or not we need to create the smell physically, or if it can be done digitally.

Some of the circumstances that we considered included:
-Remembering loved ones by smell
-Unique smells for each individual (smell fingerprint? smellfie?)
-Smell neutralization
-Remembering lost/destroyed places
-Creating places through smell (augmented reality)
-Remembering extinct food items
-In a world with Soylent, to overlay different types of smells to trick the mind into thinking the person is eating something delicious?
-Smell therapy
-Smell advertising
-Smell mapping and navigation

How does sensory stimulation augment experiences and help us remember things?

How is such a technology integrated into people’s lives and what is the larger impact on society?

Should we look at it as a device embedded in space, in our mobile devices, or something in between?

Ghost Food: vegetable protein made to taste like fish
https://www.theverge.com/2013/10/18/4851966/ghost-food-shows-how-we-might-eat-after-global-warming

We really liked the idea that smell could change our perception and override our other senses, and the dystopian worldview adopted that suggests that certain crops and foods could become extinct soon because of climate change.

At the same time, we thought that it was interesting idea that smell could be related to space; this brought up the question of whether we should embed specific scents to places (such as the smell of pizza at the entrance of a pizza place) or if we should allow scents to be recreated anywhere but transport the user to another place in their mind. Perhaps, devices embedded in our built environment could trigger the release of a smell to the user. For example, the smell of a bakery could be released when the user passes by a place previously occupied by a bakery.

On a more personal level, we realize that smell also has sentimental/memorial value for people. With the advancement of smell technology, the ability to record and re-experience smells will be highly sought after.

Fragrance delivery brooch set by Jenny Tillotson: fashion accessories that communicate with each other, that react to the user's mood

Another way to think about smell for the individual is how it could affect emotions. We imagine that if there were a library of smells, users would want to control their own emotions/stressful lives by escaping through smell.

In terms of technology, advancements have been made in storing and mixing of scents using the idea of cartridges.

We started this project off by building the world around our object, and understanding the timeline that led to the creation of this object. We then fleshed out this timeline to include more detail so that we could then understand the object and how it fits into the society around it. This made it easier for us to understand specifications of the smell mask such as size, disposability, etc.
We then built our first lo-fi prototypes. From there, we further tweeted our design and fleshed out the world around it. We started to think about how the design would be used on a day-to-day basis, how people could interact with it, what sorts of complications arise from the design we had settled upon, and moved pieces of the mask around based on that. 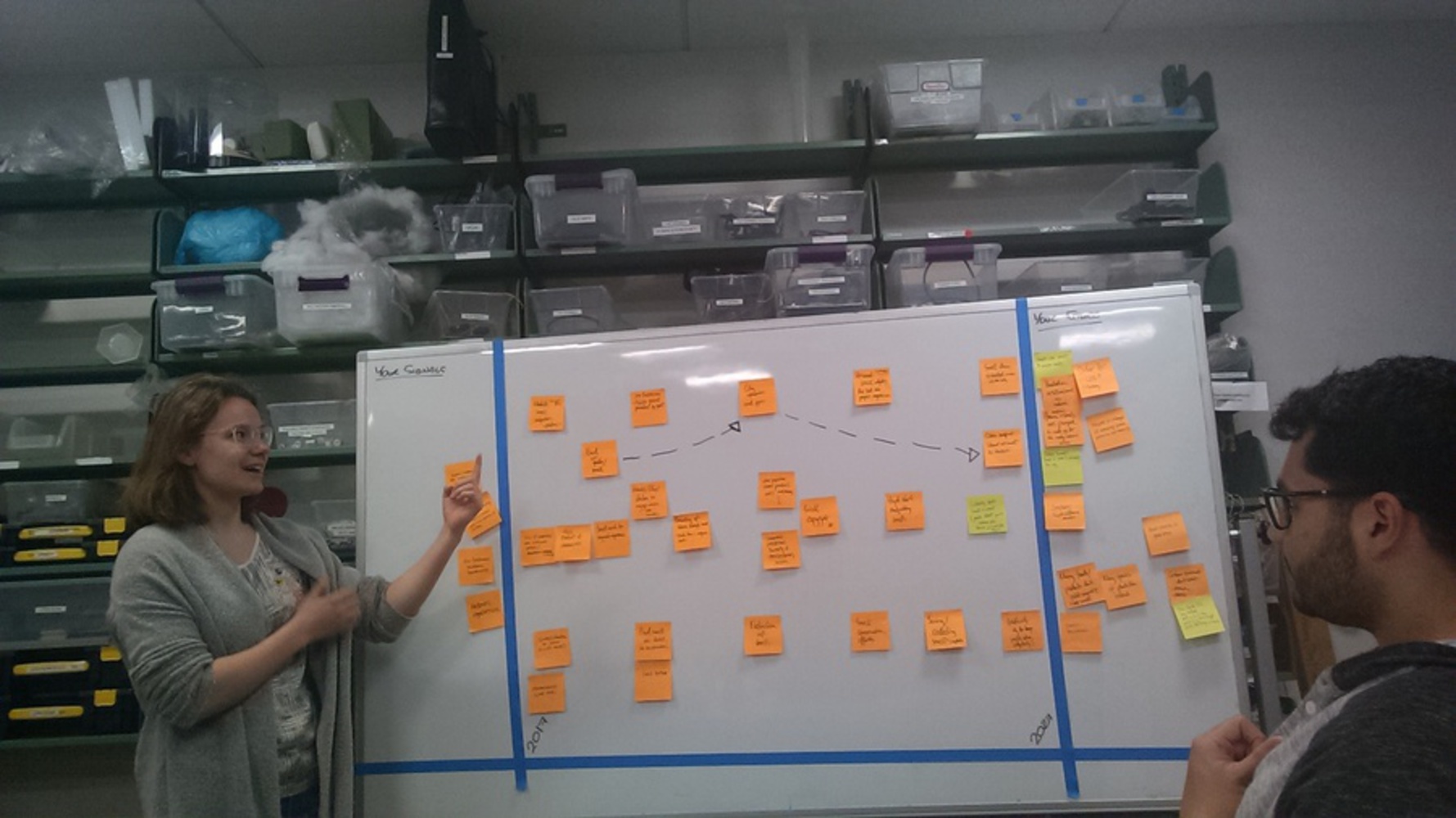 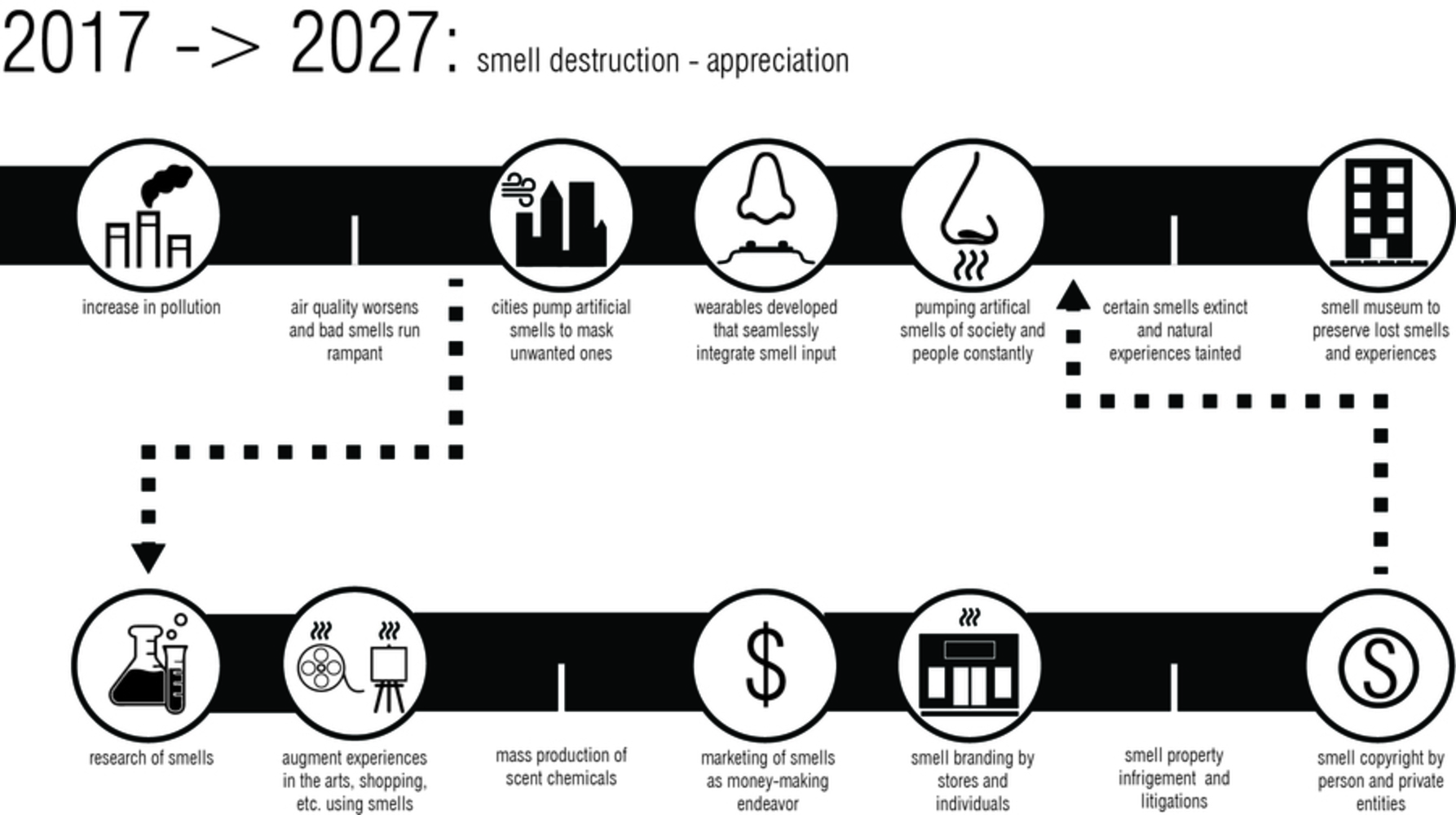 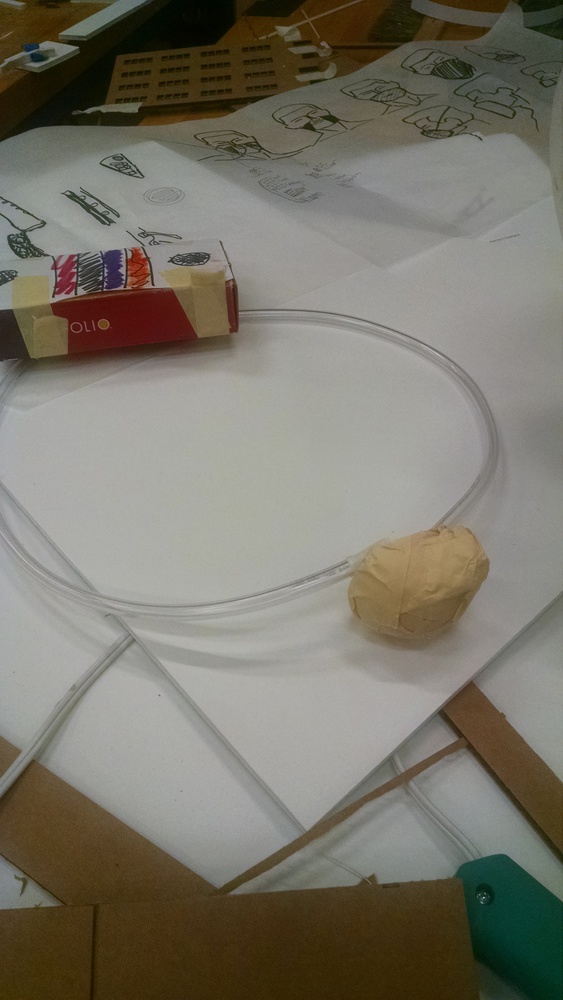 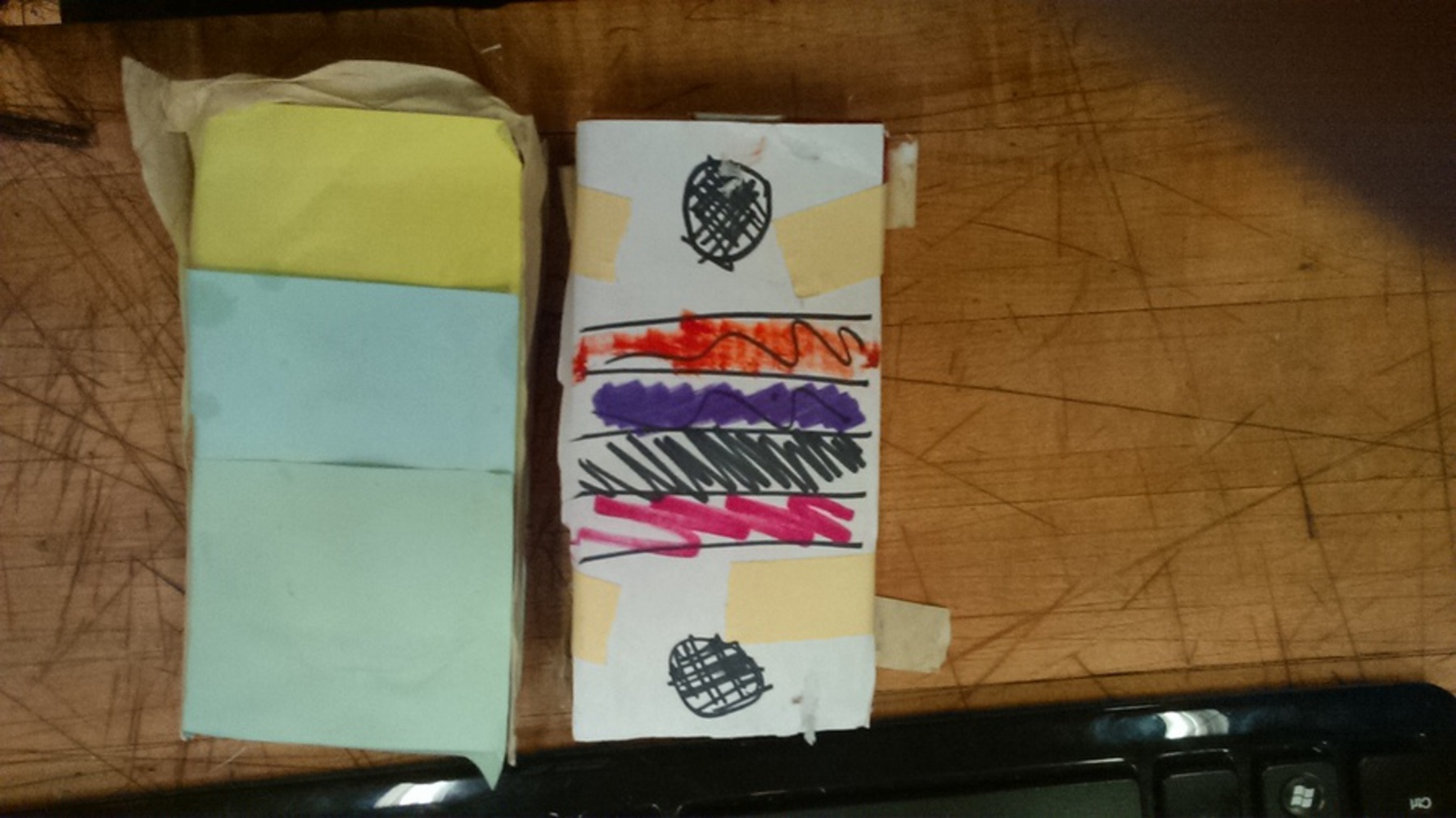 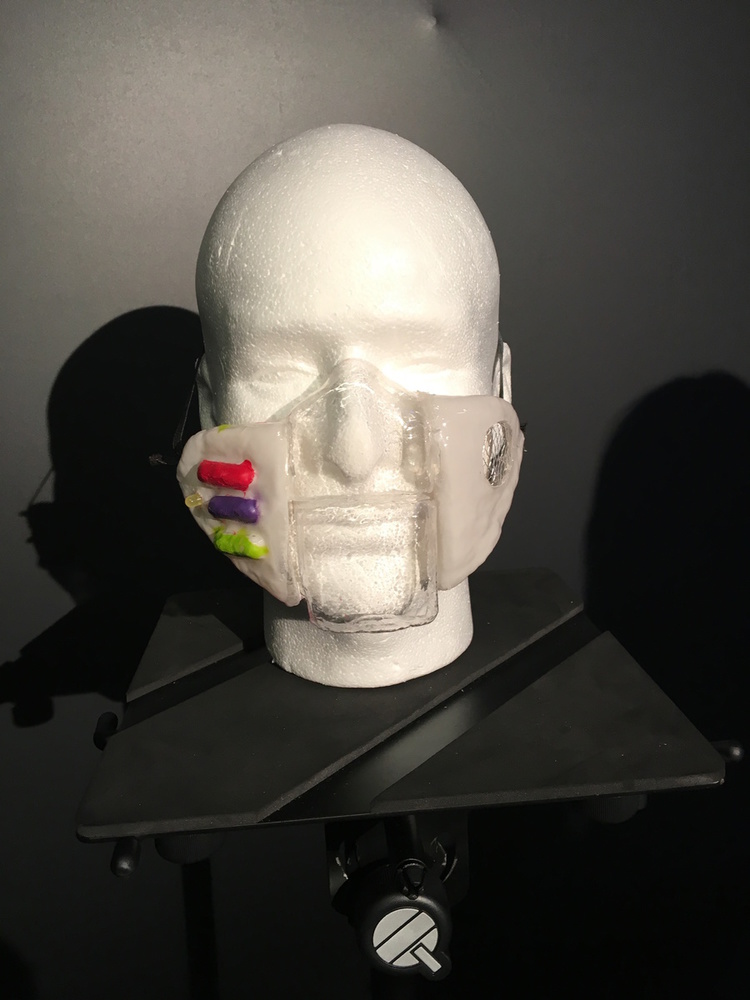 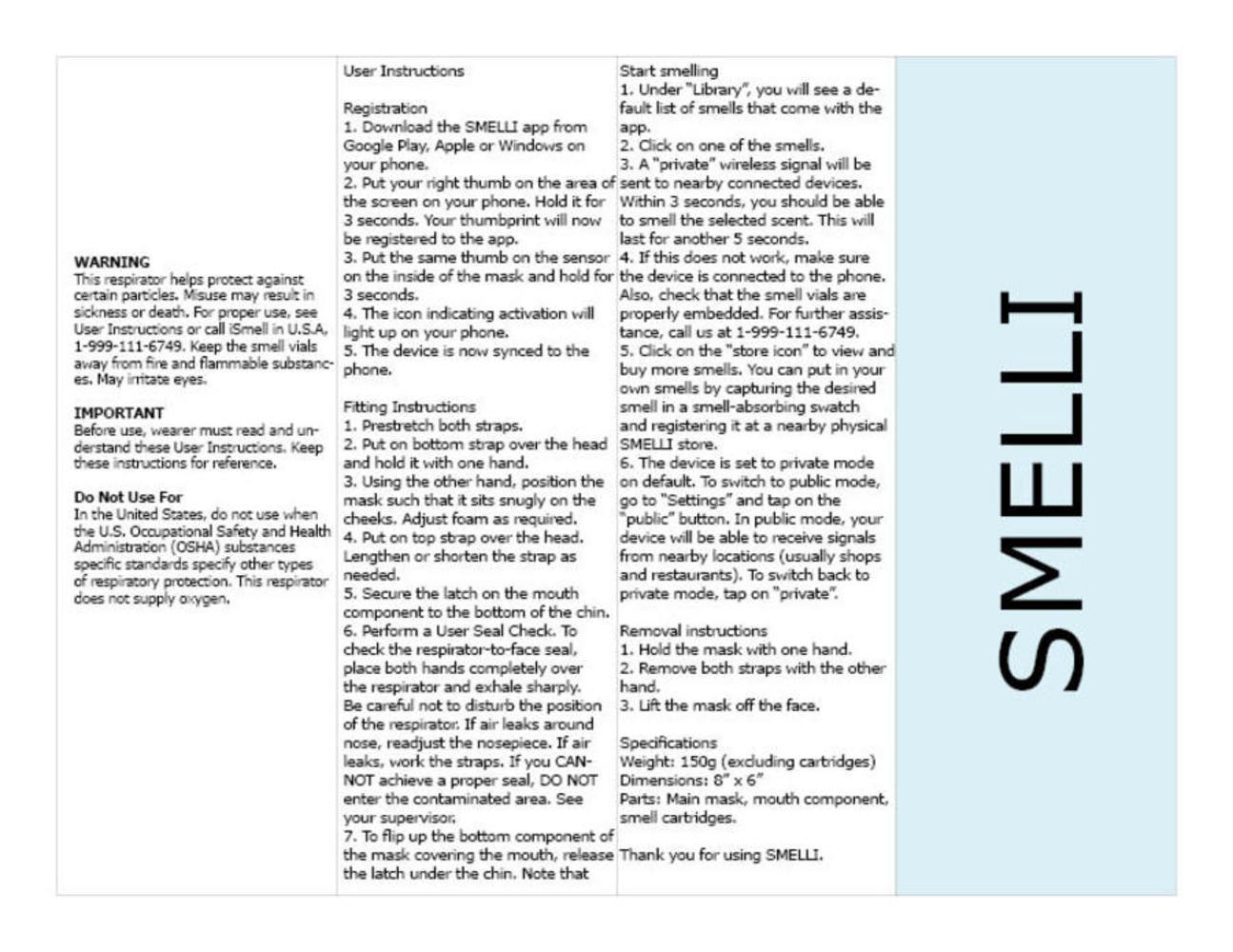 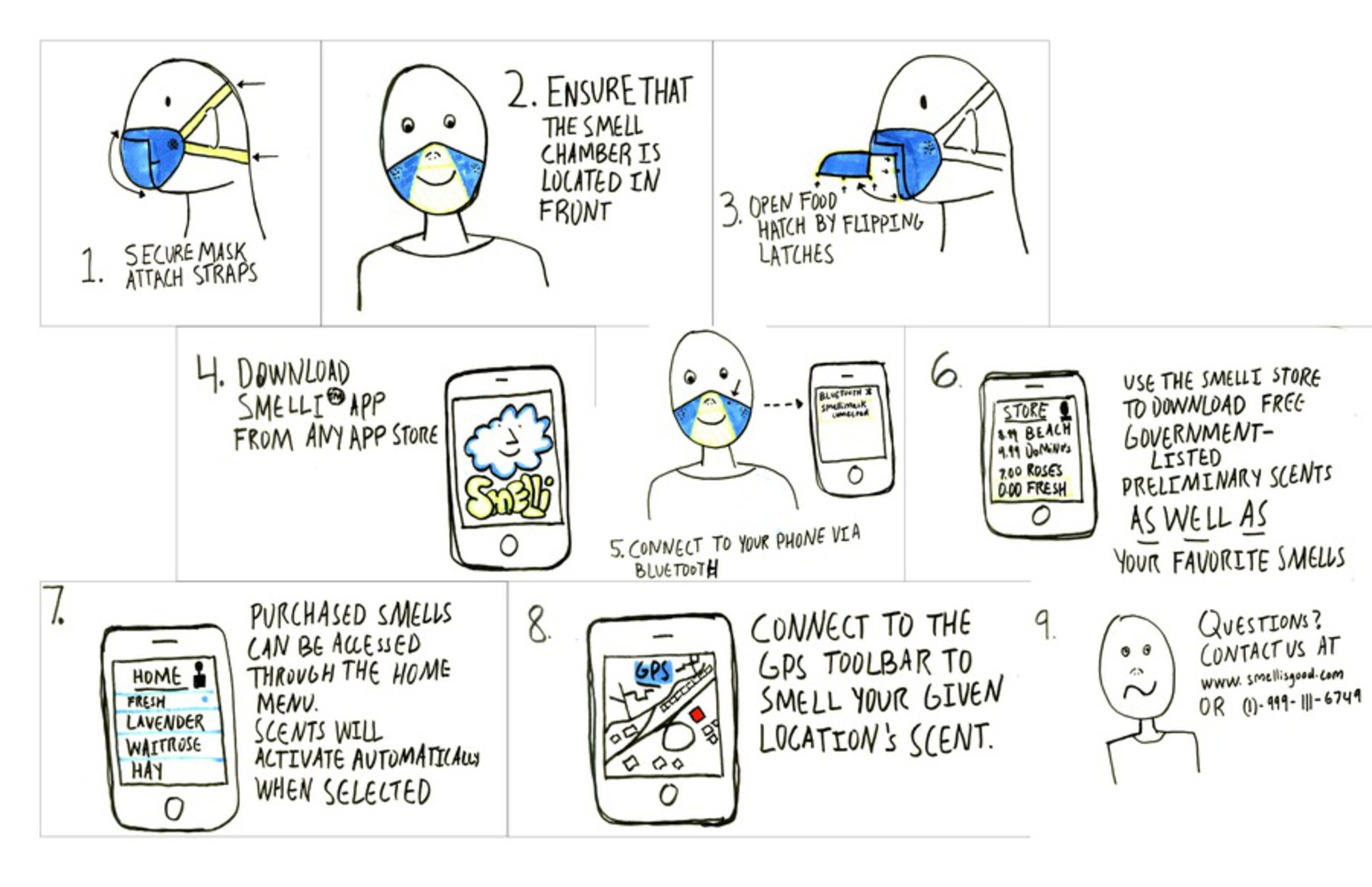 From our research, we gained a basic understanding of the components and technology of such a device. Our device would need to filter air using 1) negative ions 2) activated carbon filtration or 3) condensation; as well as to create and emit smells using 1) smell cartridges or 2) magnetic coils that target smell receptors. We decided to go with some sort of mesh/filter and smell cartridges. The device comprises of passive air filtering and active smell emission, which is operated by a small battery (possibly rechargeable). The smell emission system is activated using a sensor (eg. based on location) which causes the circuit to close; the corresponding mix of odors are requested and sent through the “input” side to the nose and mouth. There is a separate side for exhaling of gases and for collection of filtered pollutants.

In creating a prototype for the smell filtering/enhancing device, some of the questions we dealt with included:

For the making of the prototype, we used clay and formed the shape of the smell mask on a foam head until we had the desired shape.  Then, the mask was cut into different pieces and left out to dry/harden.  THe pieces were then vacuum-formed with plastic to get the shape of the different components, cut out, then glued together to form the mask.  The mask was then spray painted and elastic was added to bring it to another level of resolution. 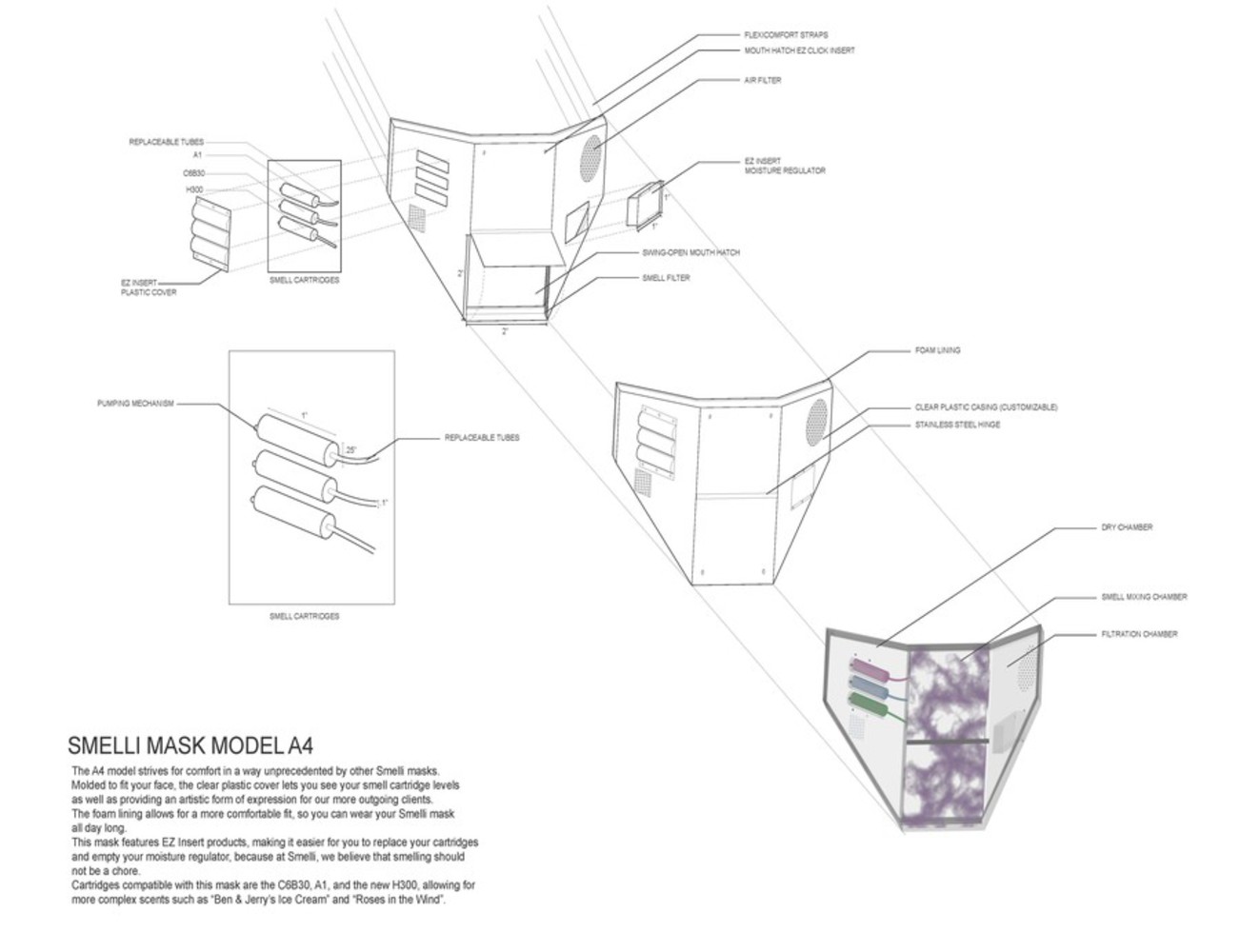 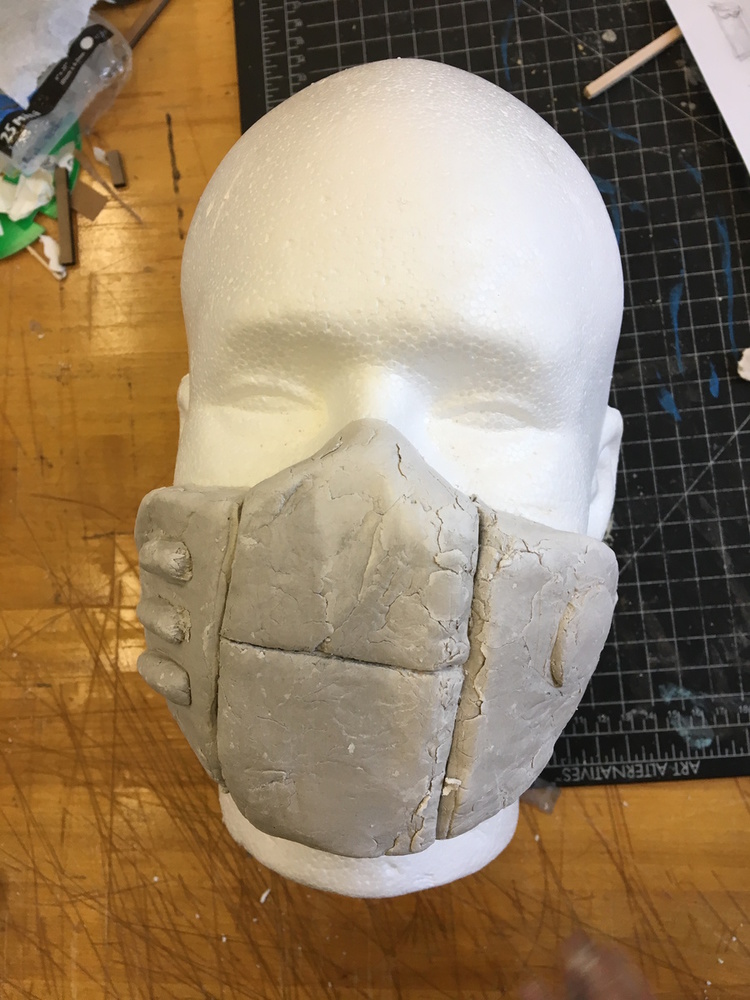 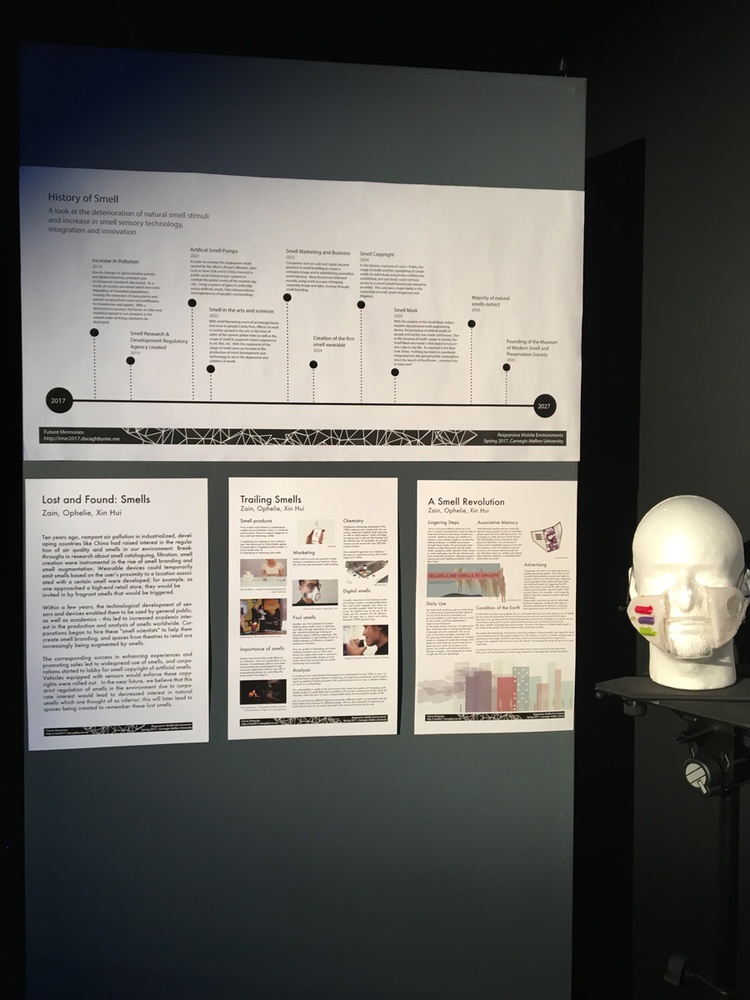 We used this project to explore the future of smell technology, a part of technology that is much less developed than technology catering towards sight or sound. For this reason, we approached the project in a way that we thought would inspire questions about smell technology and start a conversation. Some questions we wanted to raise were:

What is the most convincing market for smell technology products? Should devices be able to serve multiple functions (personal, commercial, environmental, cultural etc)?

To what extent will smell technology be accepted? How should the user interface be thought about?

What are the issues that could prevent smell technology from being adopted, if developed?

Should smell be a shared experience? Should devices be worn by the individual, or should they be embedded in space with a certain area of influence?

What is the future of smell data in helping us understand the world around us better?

What is the potential of smell technology in outer space?

Our project dealt mostly with a complex web of problems and solutions: how do we respond to pollution, how do large companies respond to this solution, and how do we interact with this answer. In building this web, we came up with a variety of other problems and solutions that could drive the design of our mask, and help explain its presence in the society of the future. Some of these problems, such as the extinction of certain smells due to pollution, could've driven the project in an entirely new direction. Looking back on these ideas, it might have been interesting to further explore the idea of a smell museum, and looked further into the avenue of smell preservation rather than the use of smell to trigger memories. 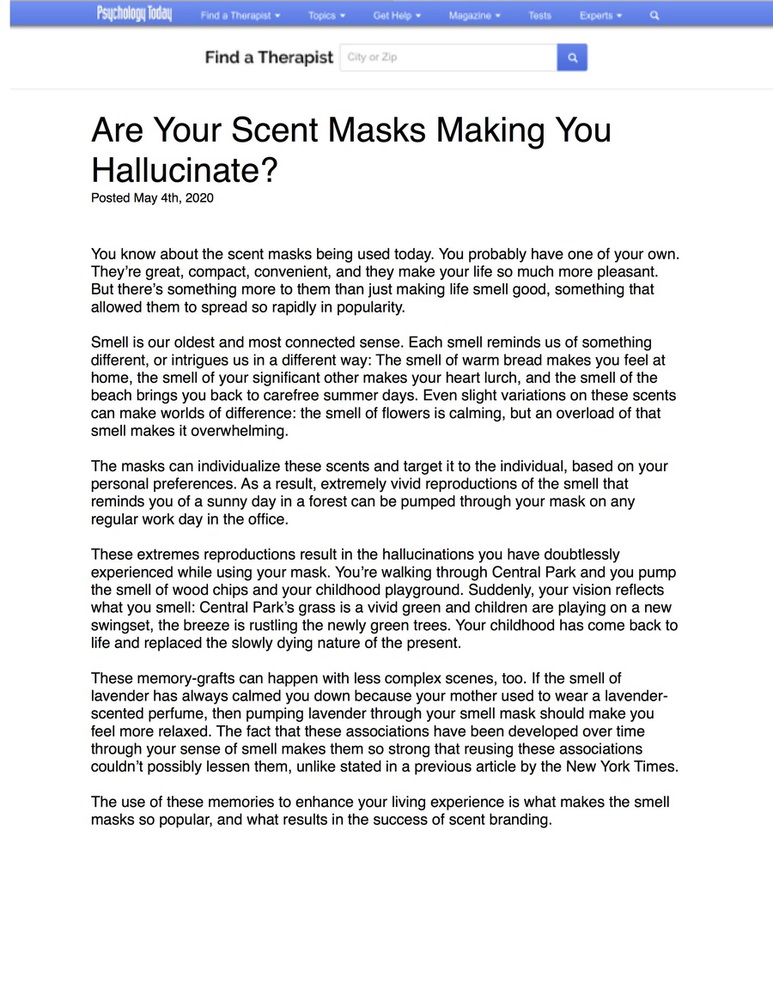 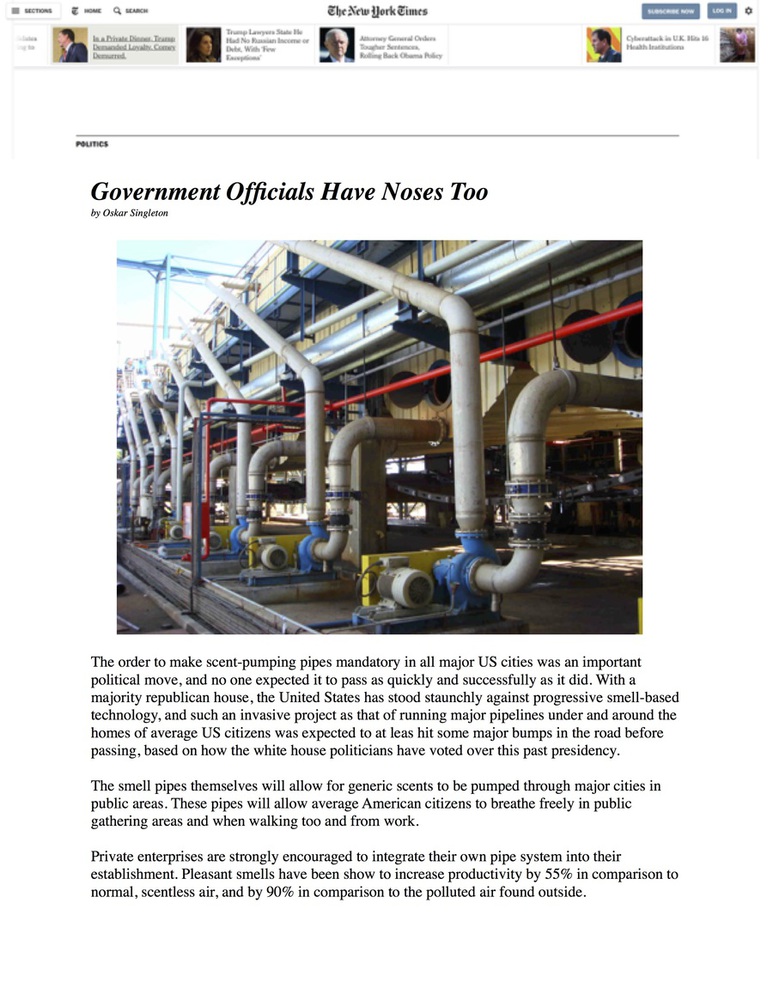 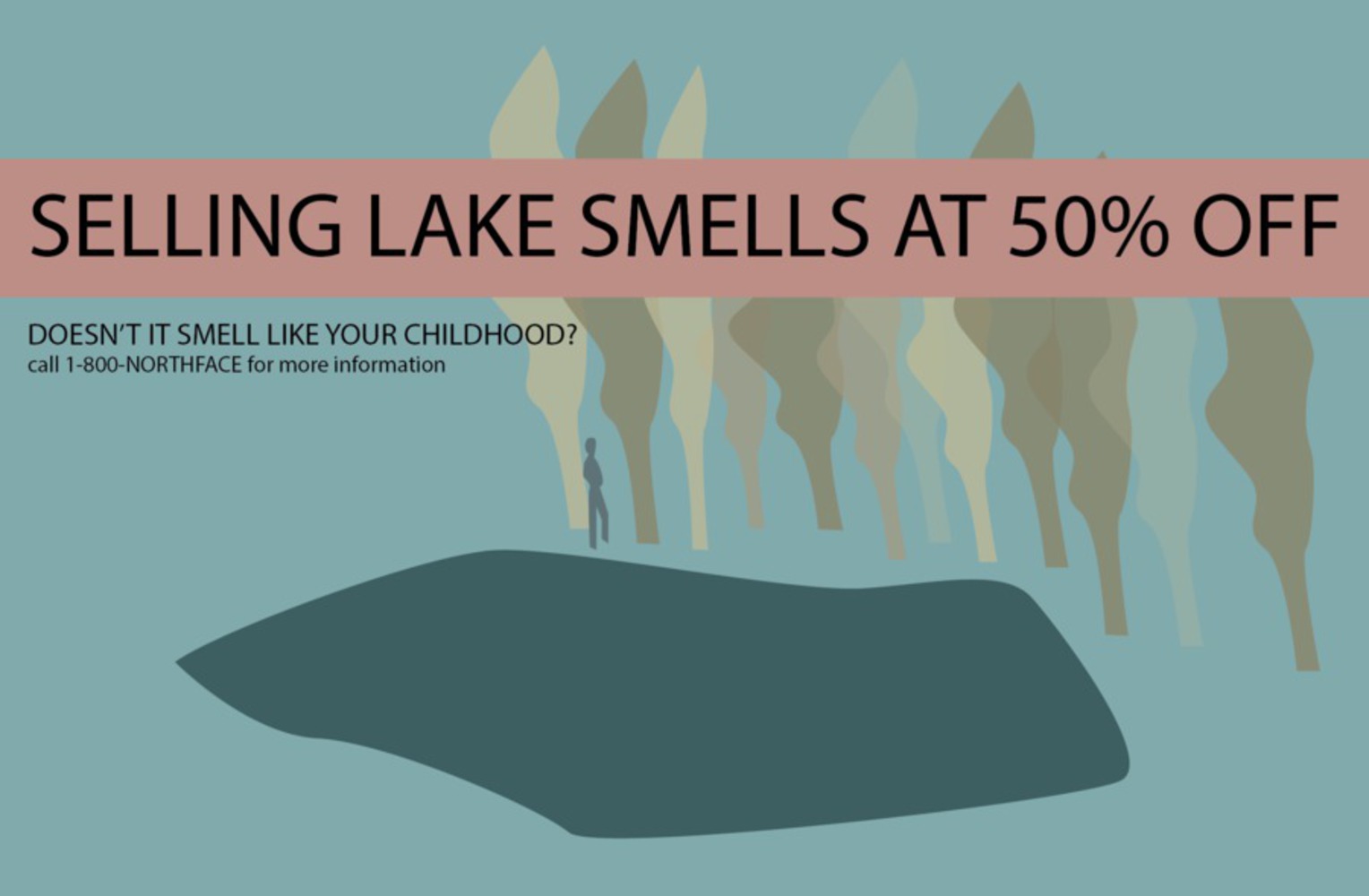 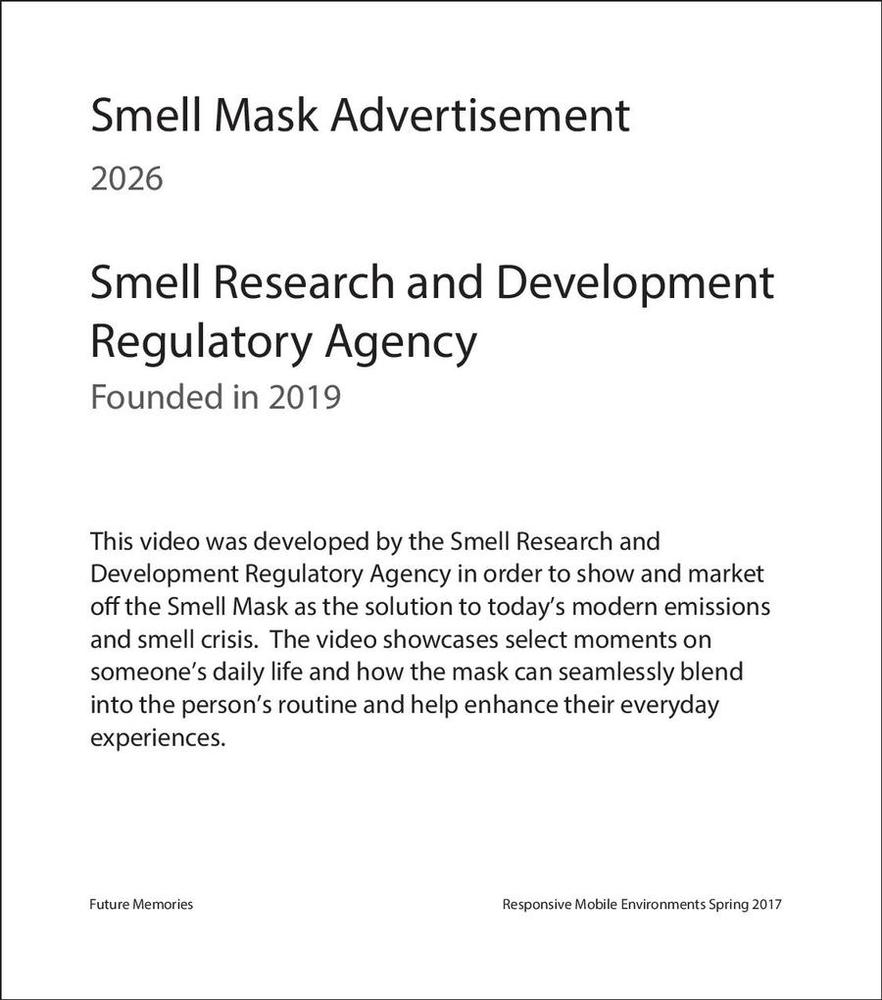 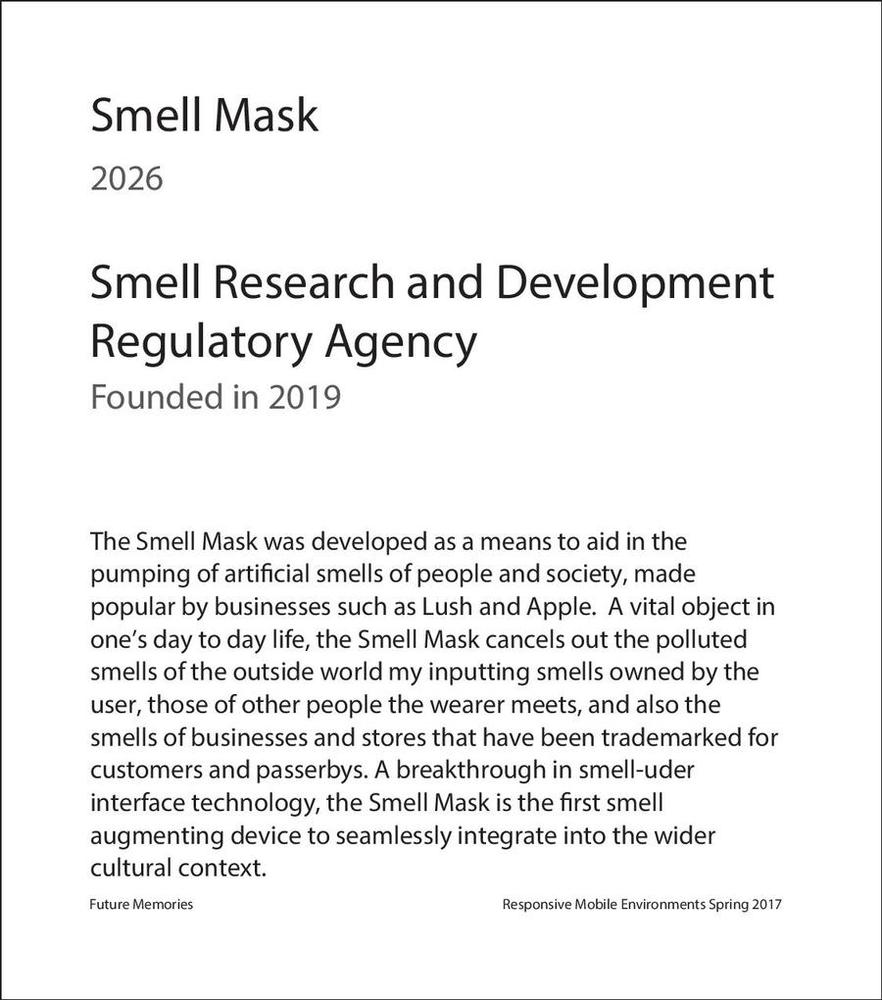 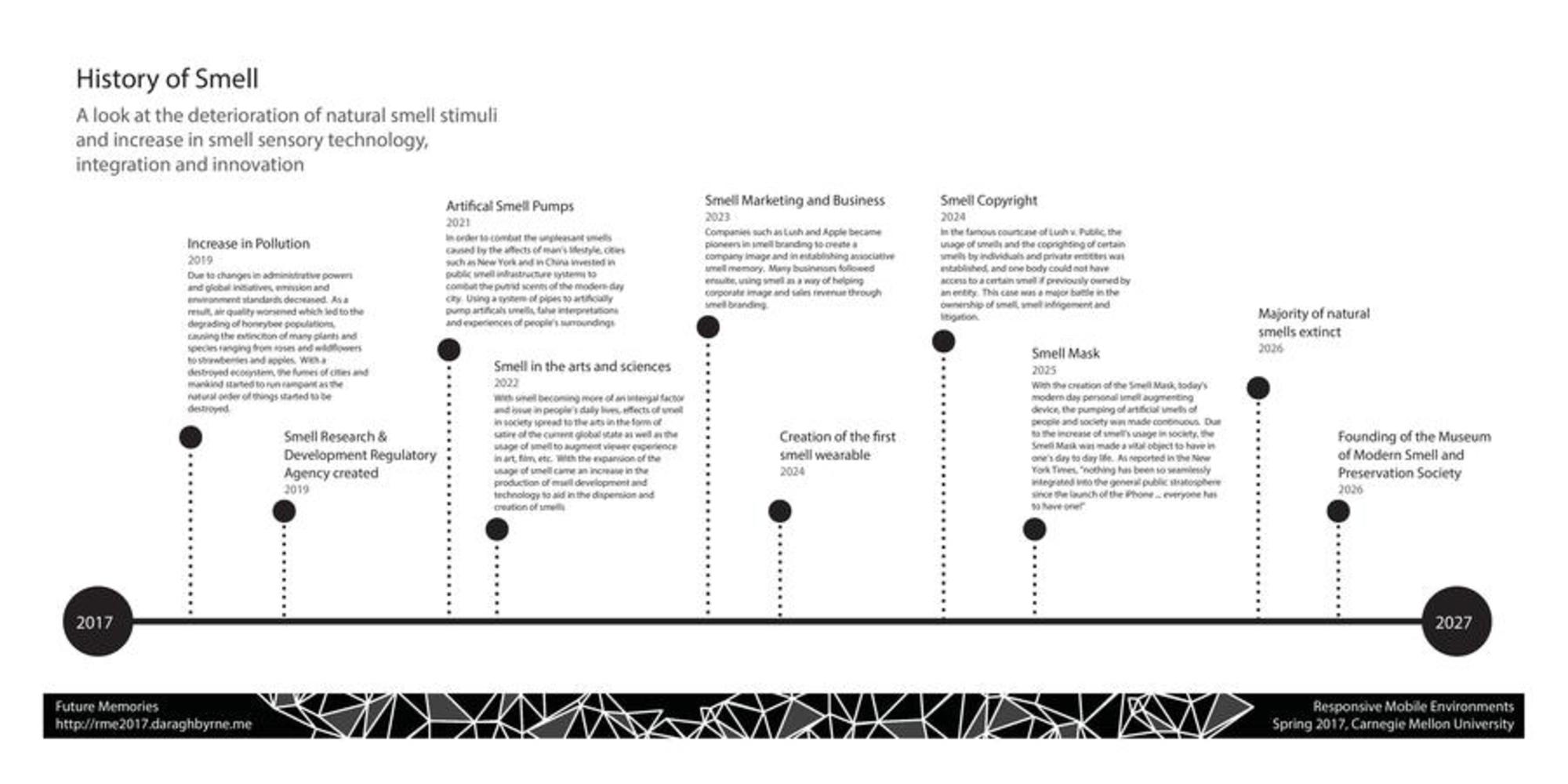 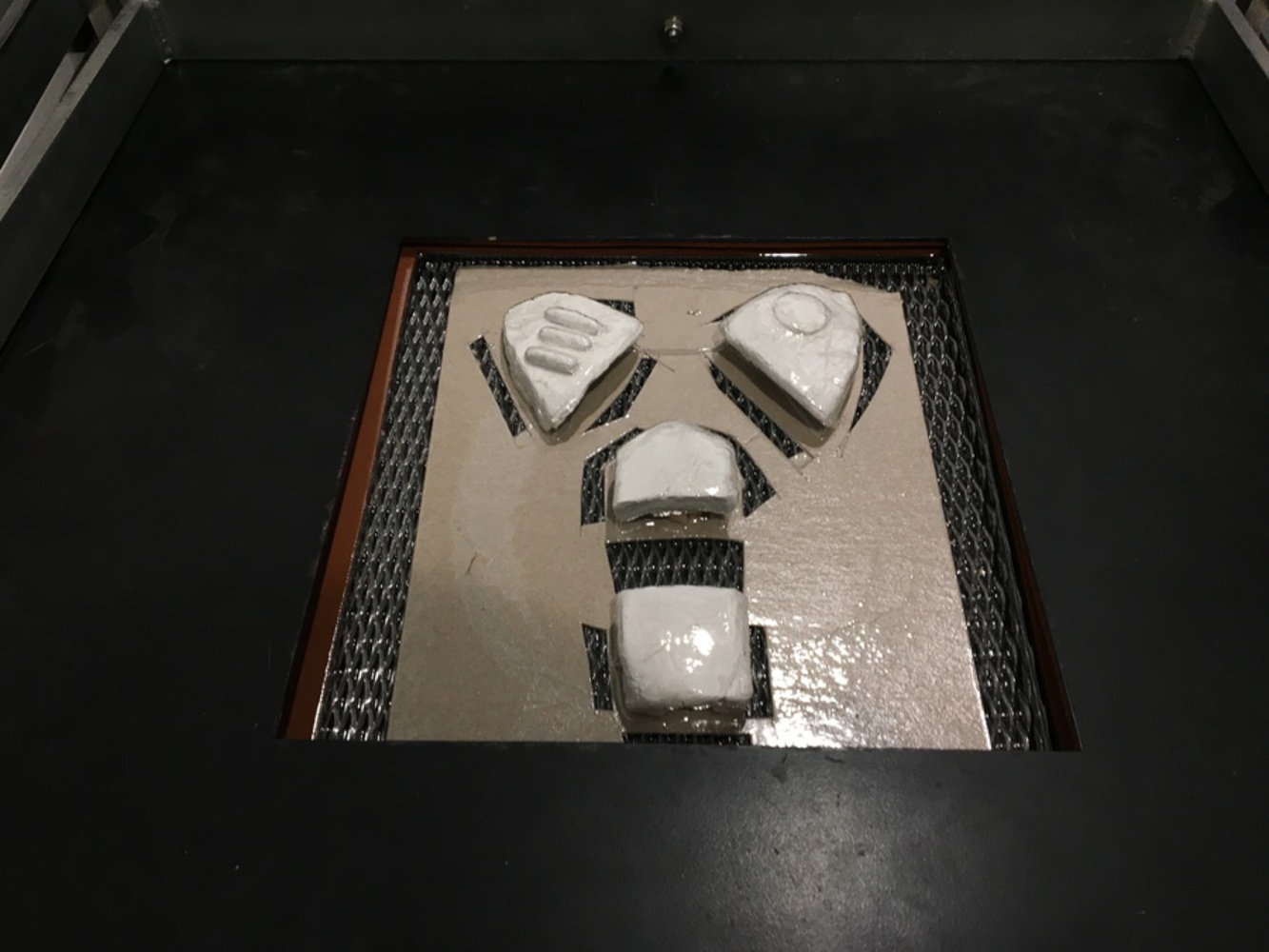