Made by Kristie Lord, Cassie Alsept and Victoria Yong

This project will be a video that demonstrates a garbage can that can help a person to forget someone by removing all digital traces of them be it on Facebook, old photos, old messages, and even the most obscure traces like Pokemon GO.

The idea behind this project is to "forget" somebody from your social media/phone space.  Currently, in this world, there is no way to completely remove all traces of someone from your live no matter how much you may want to, especially in the event of an unhealthy relationship.  Therefore, we made this project to picture if this is true and what it would be like.  We made this project to demonstrate how a "smart" forgetting trash could remove traces of unwanted people from your environment.

This project was also made to spark conversations around the idea of forgetting and how this can be accomplished in our world today.  We wanted people to think about a world where this is true.  The trash can goes through deleting the person and showing fire to give them a sense of relief and catharsis in letting go.  We intended for the project and the process of permanently forgetting someone to not be taken lightly and to only be used in cases of extreme emotional distress.

See video of our project up top by clicking on the link to Vimeo.

We created an experience prototype. Unfortunately, it cannot actually delete traces of people, we'd be rich if we could do that, but we created a "pepper's ghost" type of projection to simulate Kristie being forgotten. We created a black trash can that could project images using project and appear to be on fire when forgetting a person.  We decided on a sleek projection method, a sleek style of trash can, and a black trash can to fit into the surroundings as an everyday object that could be anywhere.  See code below for the fire effect:

Prior work could include the bowl we discussed in class that displayed photos on its sides when a phone was placed into it- where you could drag up the important photos. We also had the theories of how "burning" objects had a healing effect so we wanted to incorporate a "burning" trash can when Kristie was being finally forgotten from Cassie's life and media as a way of  promoting emotional healing.

We first started the process by meeting up and discussing ideas.  Eventually, we settled on a trash that could delete all traces of someone from your life.  Since Cassie and I were friends and had photos together already, we decided it made sense for one of us to be forgotten in the video.  After we discussed, Victoria story-boarded the video and we discussed more specifics. We also had many iterations of the trash can itself.  Originally, we wanted it to be bigger and debated making it a bright color, so it stands out more.  However, we eventually settled on a smaller design, so it appeared as a regular dorm trash can and blended in to Cassie's dorm room for the video.  See photos below. 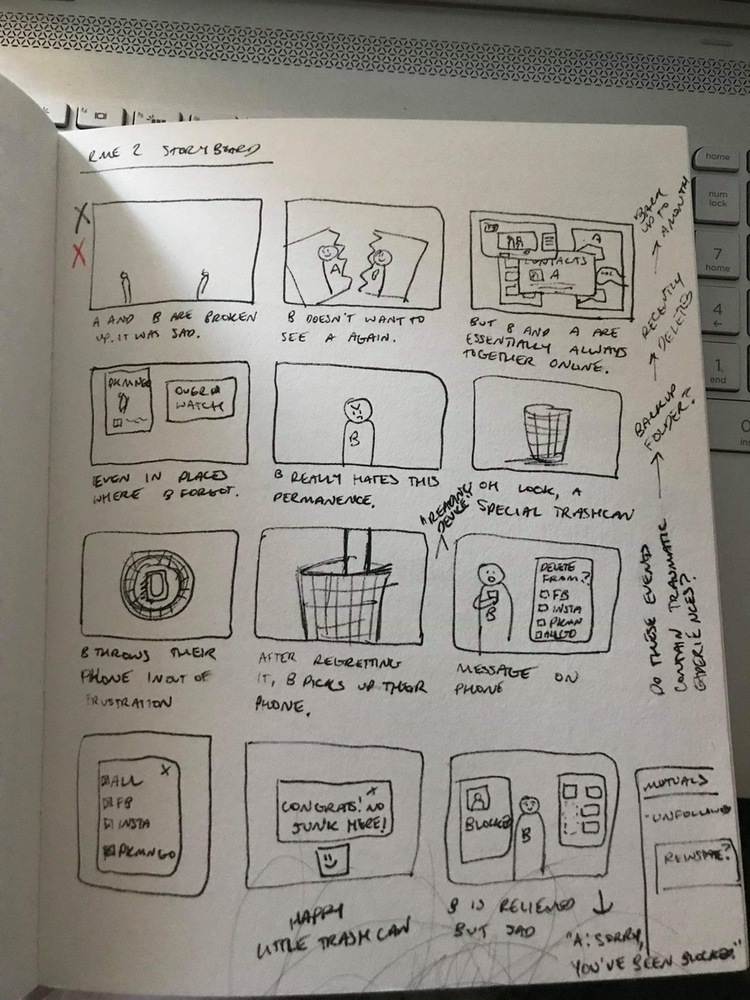 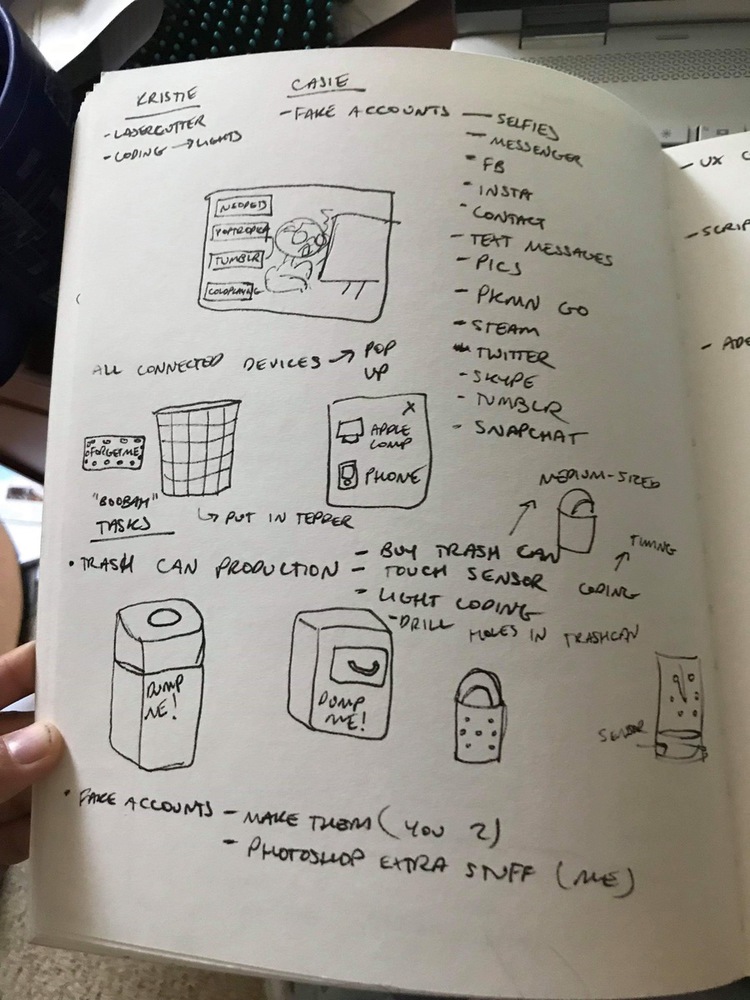 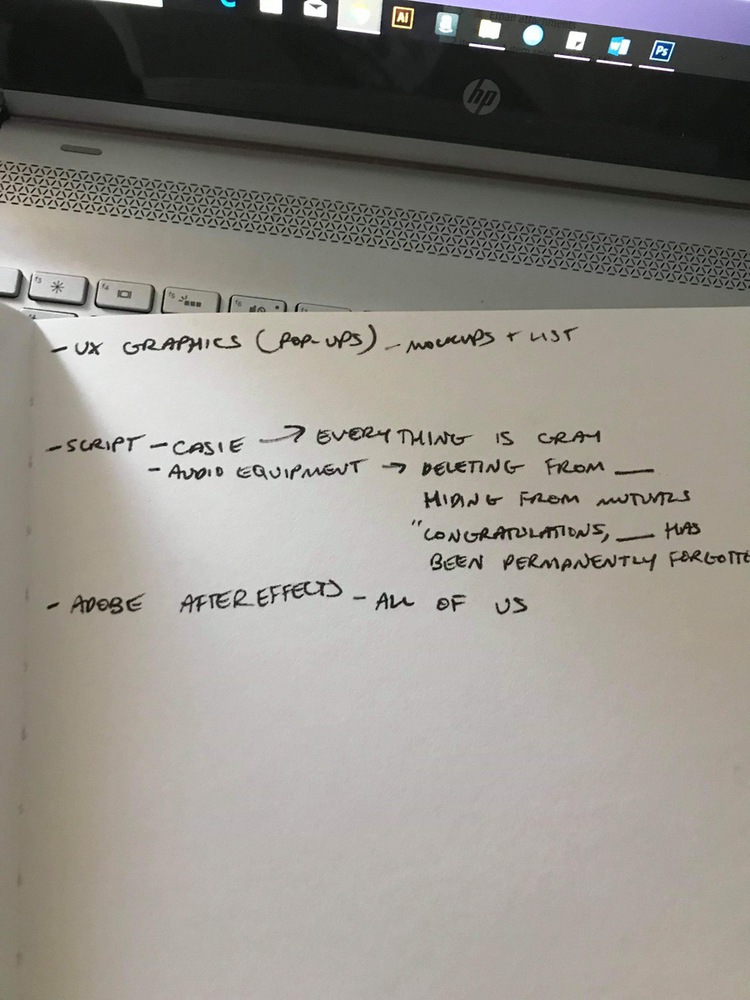 To make the trash can appear more special, we wanted to use projection technology, however, there were many iterations done.  We first had the idea to project the images inside of the trash can- on an inside wall. We then had an iteration where we would just project what we wanted onto the outside of the trash can using a projector since we were having difficulty with reflecting correctly.   Eventually, we decided on pepper's ghost since it was more sleek and allowed the trash can to be a standalone object.  Pepper's ghost works by tilting acrylic at an angle to project a video that's playing at a different angle. See the video below to see us practicing it (click full screen to see it).

To use pepper's ghost, we animated a video of the trash can. We first created pictures of an app trash can as well as gathered traces of pictures of me and Cassie together as well as making fake accounts, so I could follow Cassie. See pictures below for trash can animations and some sample pictures we used in the project.

0
Video of us practicing pepper's ghost
0 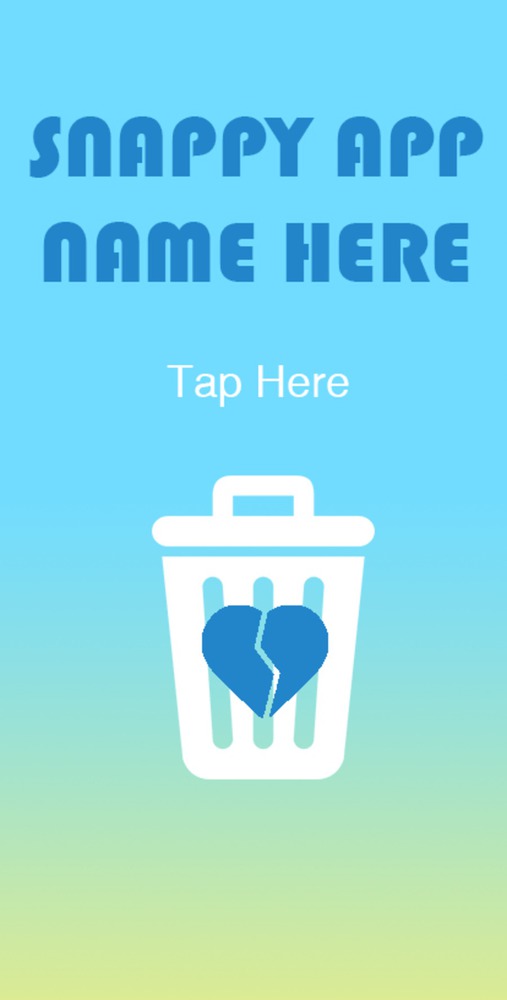 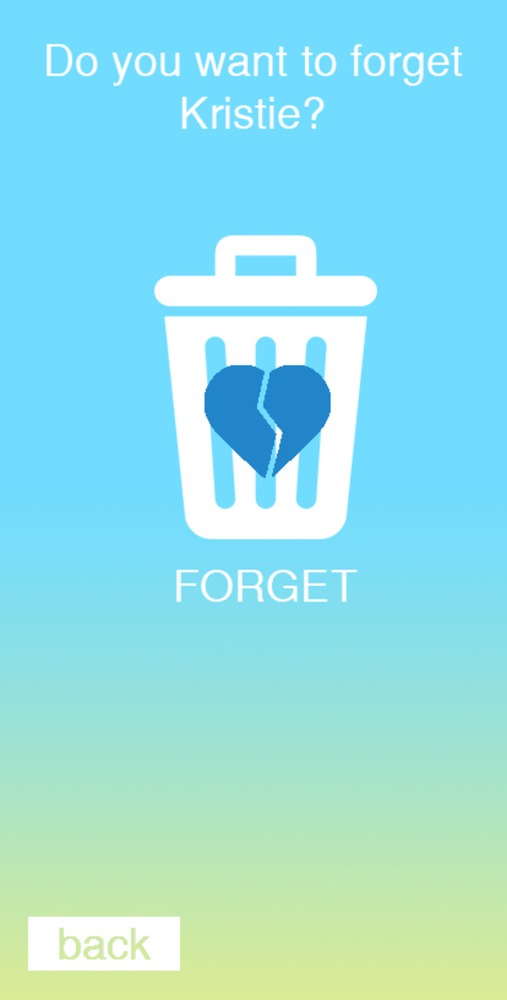 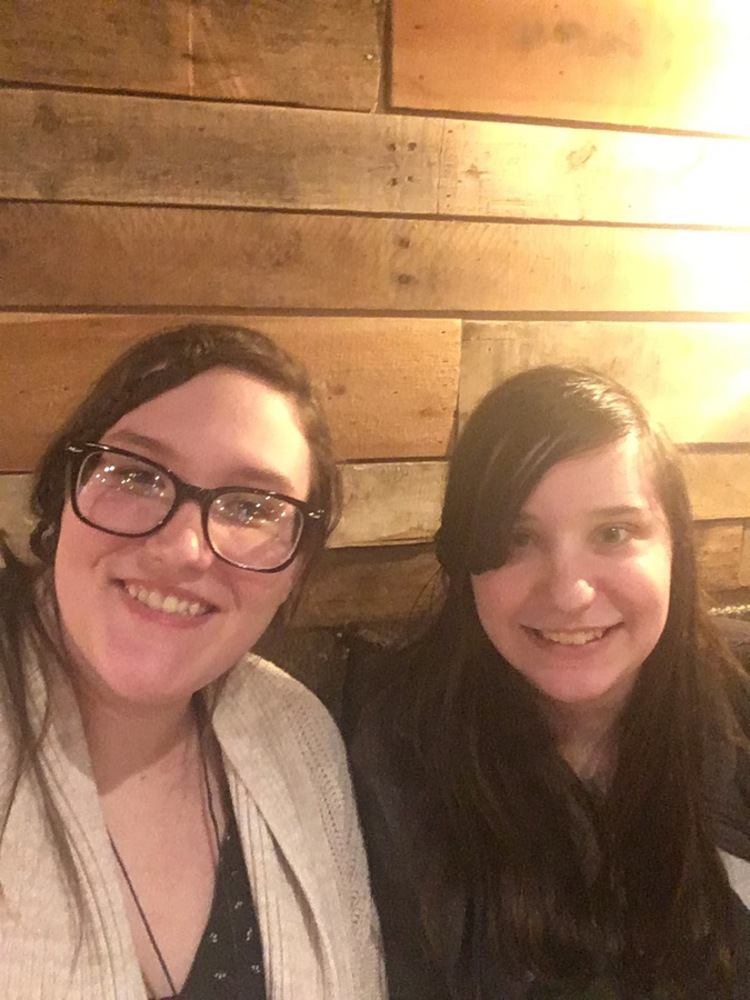 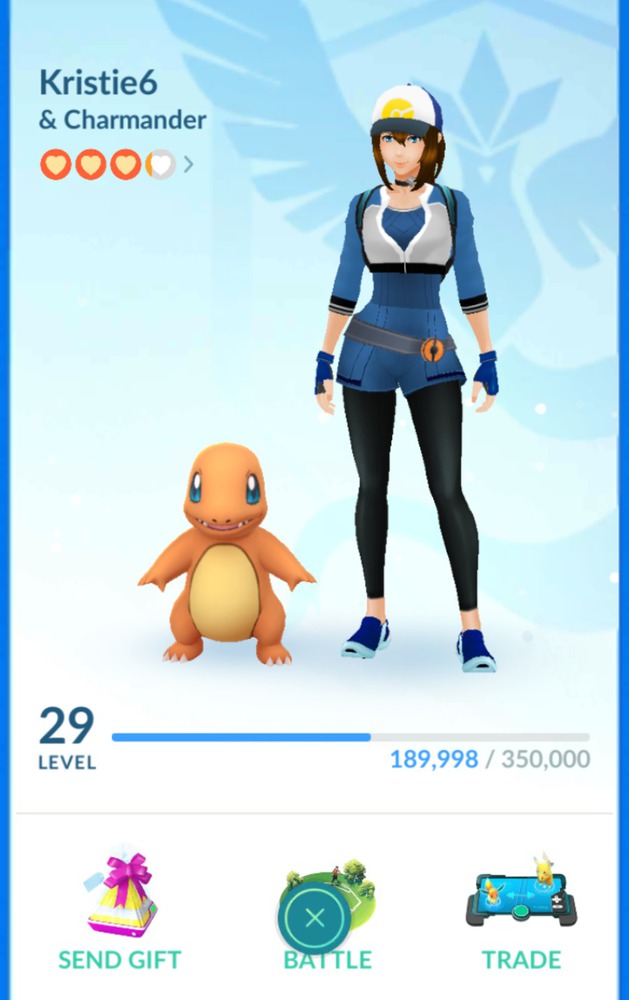 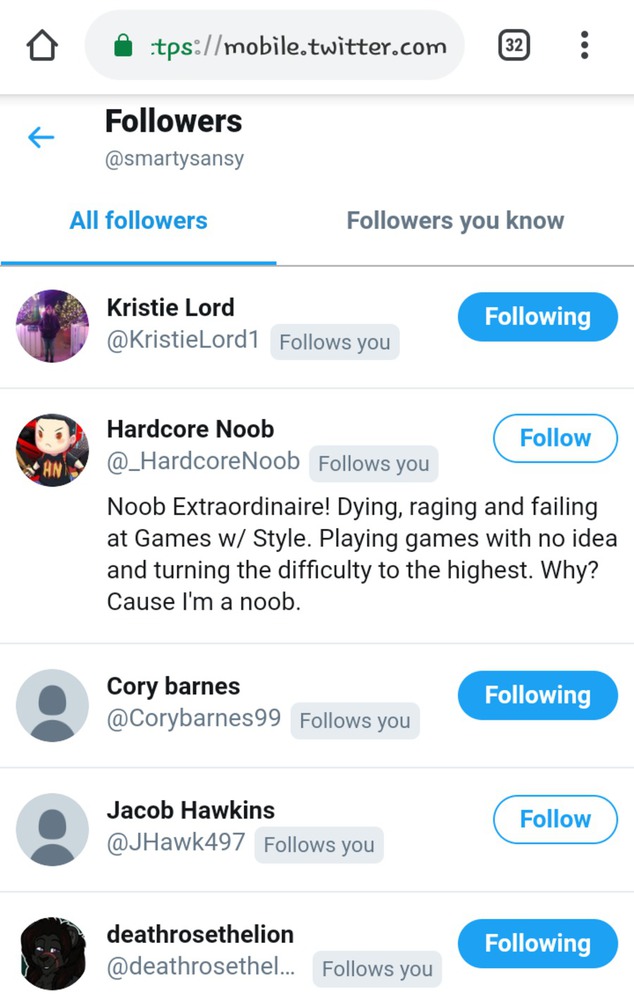 After gathering all the traces, we used photoshop to animate a video, showing Kristie being forgotten/removed from contact with Cassie through multiple sites, including Facebook, Instagram, Pokemon Go, Neopets, Snapchat, Twitter, Messenger, contacts, photos, and messages.   We had to mirror the video to reverse the animation, so it would look correct when being projected.  We also have 20 seconds of black screen used, so the trash can appears to turn on and for filming purposes. You can see the video we projected below by clicking on the Vimeo link below.

For the video, Cassie and Kristie recorded audio files of Cassie speaking as the trash can.  Each file was made separately and edited using Audacity.  See file below for a sample audio.  After that, the trash can was put together using black foam with an I-pad on the side and acrylic tilted at a 50 degree angle to project the animation on the front of the trash can.

We also decided later to make the trash can more "special" by having it appear to be burning, while deleting Kristie.  This was done because we wanted to emphasize that this process was permanent like a fire burning things to ash and to make the process more cathartic for the person, in this case Cassie, forgetting the other.  To accomplish this, we initially used LED lights and a code for fire burning found online.  However, the lights were too hard to see, so we switched to a neopixel LED strip. 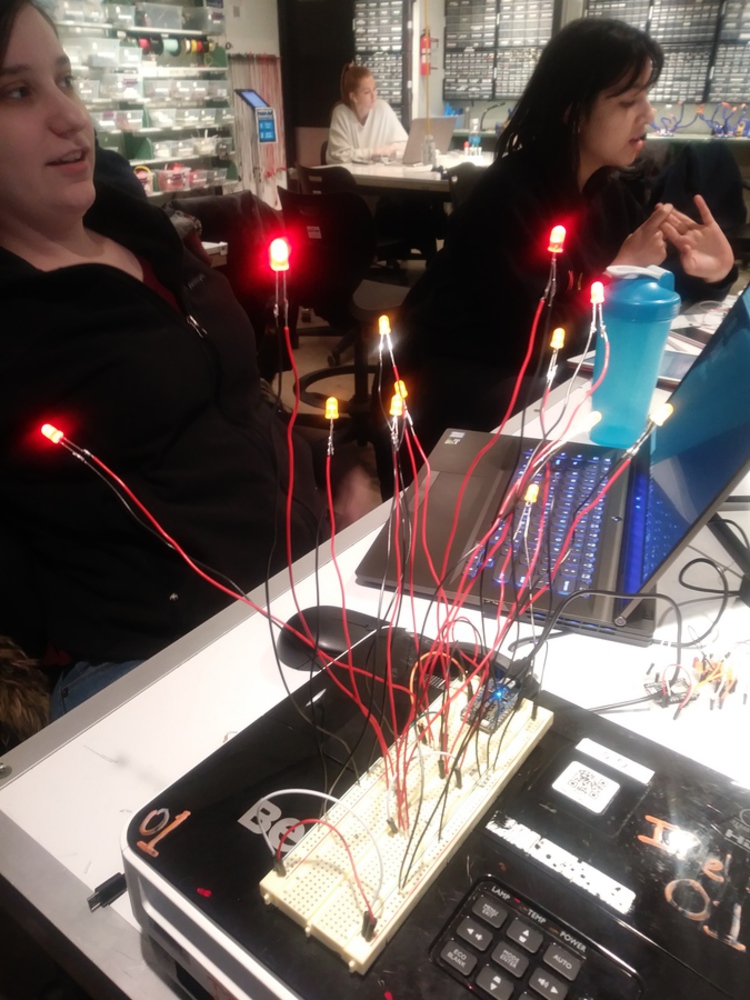 After we had the trash can done, we were ready to film, so we borrowed a camera for IDeATe lending.  The video was filmed in separate parts and video edited together by Kristie using Adobe Premiere Pro.  For the final scene with the fire turning off when Cassie reaches in to the trash can, we had Kristie hiding underneath the desk to unplug the fire.  See photo below: 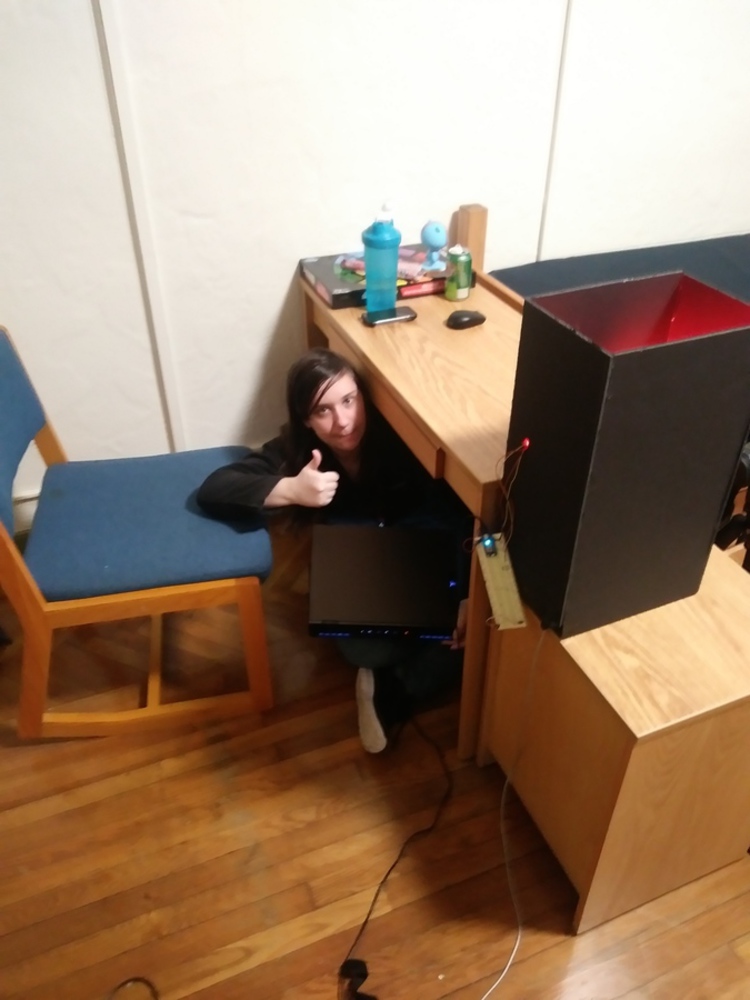 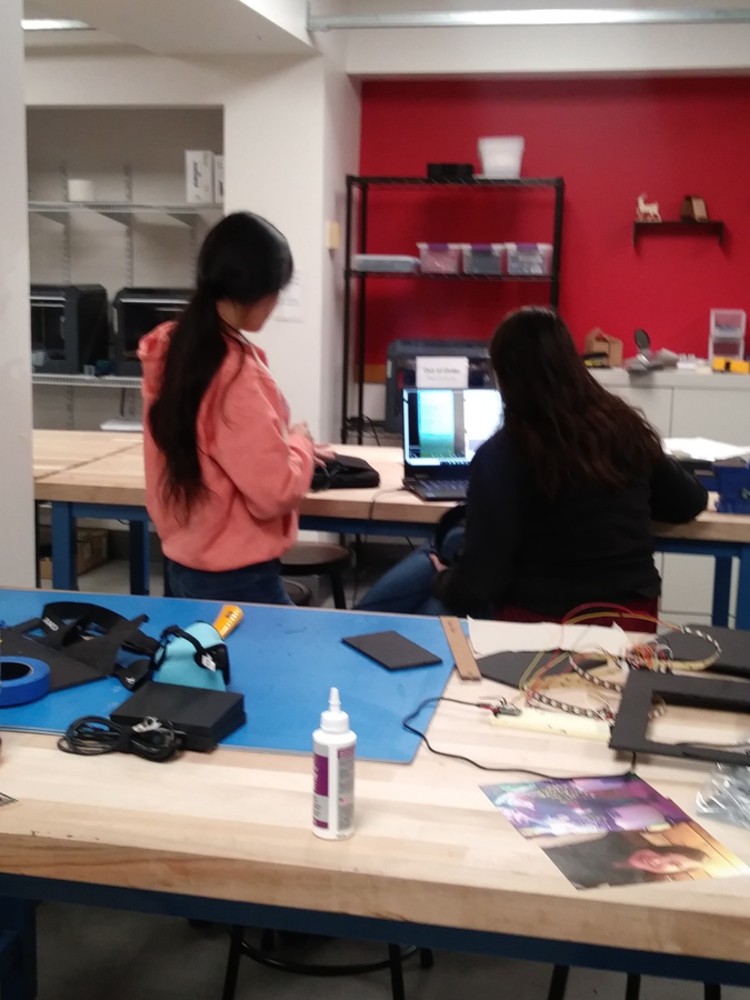 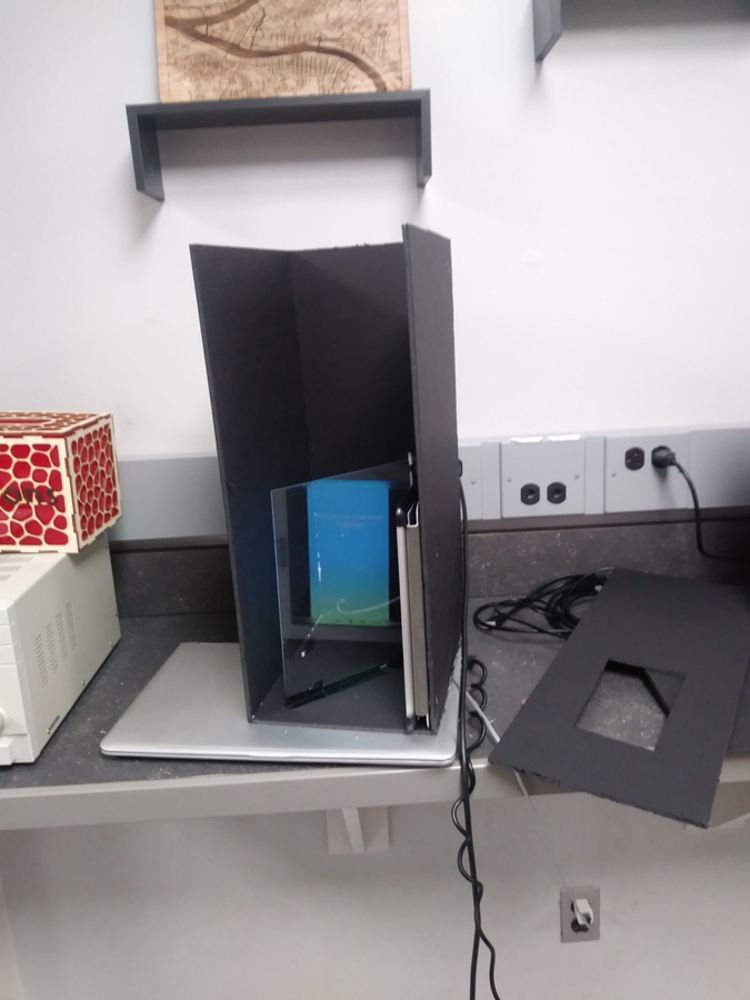 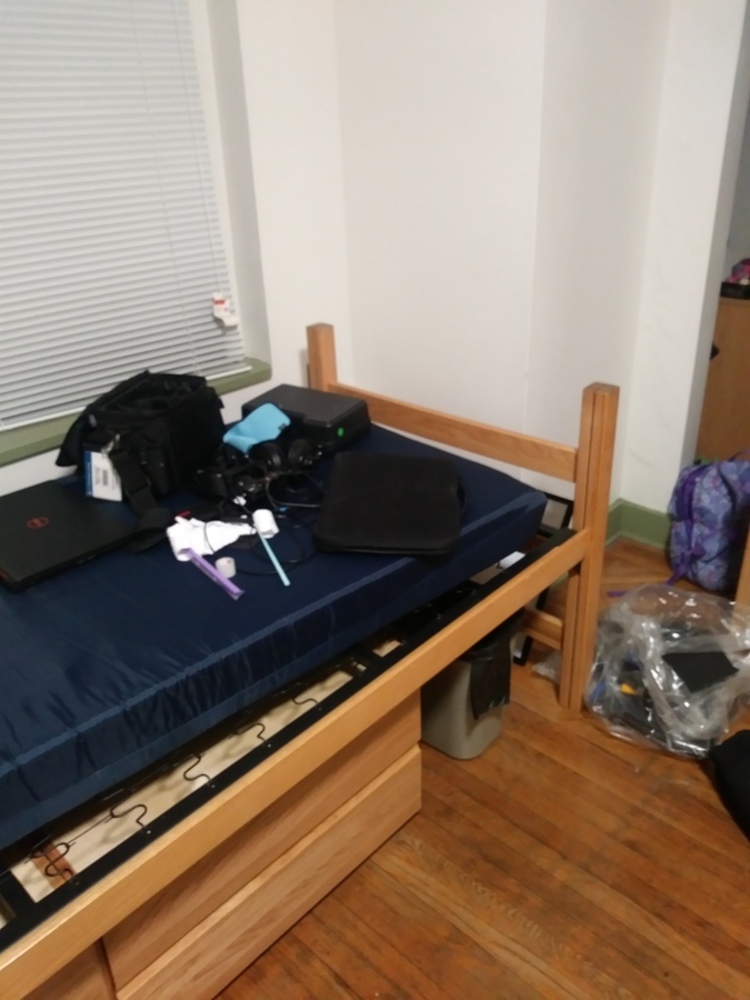 We would like to ask if a "smart" trash can like this can actually be created that uses facial recognition and interaction patterns to determine people linked to you, and if you can ask it to forget people, or delete all photos, unfriend from everywhere, block, remove contact information, send in requests for photos to be taken down by the original poster, etc. It could be feasible if you grant it the right permissions, such as the ability to speak for you, like in the prop video we watched in class.  Additionally, we wanted to question the "right" to forget and why if people are going through extreme distress they can't just delete that person from their lives thanks to digital traces and social media.  What would the world be like if we could forget and remove the harmful people from our lives?  Would permanently forgetting someone cause relief?

We faced quite a few challenges in making this video and prototype.  We had quite difficulty in getting pepper's ghost to work and look nice as well as in video editing since Kristie spent 3 hours attempting to export our video.  Through these challenges, we learned that peppers ghost isn't a very good option for manufacturing this object unless you have specific machinery for it.

We learned that the process of forgetting, even if fake for now, was an incredibly relieving and healing process, and we believe that a trash can like this could help facilitate this type of healing in the future. In the future, we would also have marked where the acrylic should go in the box, as the constant shifting and re-alignment was painfully irritating. We also needed to completely  finish scripting and filming before creating scene specific audio files- we learned that the hard way. We got to a great product that most of us were proud of, though we spent hours upon hours of time making iterations and fixing things that didn't need to be fixed.

Through class crits, we realized that we needed to have a better physical piece to the project. The trash can that we used was metaphorical, which worked for the artistic part of the project, but it wasn’t very useful as an everyday object. It was noted how we needed something that could be used everyday, like a paper shredder or a microwave, in order to add value and usefulness to the object. Additionally, we questioned the usefulness and consumer use of the project.  Since it was a trash can in a dorm room, would someone need to buy one just to forget someone?  Would they be publicly placed for widespread use?  This was an interesting concept since we didn't consider the way someone would get access to the trash can and its feasibility.  This really gave us insight that we need to consider the bigger picture and consider all aspects of a product.

We also realized that it would be nice to have an “undo” option for more agency over the forgetting process, but we didn’t include it, as we liked the finality of the project as it was. It wasn’t supposed to be used at any time: it was meant to be a forgetting instance for only the most extreme of circumstances, such as abuse or PTSD. We allowed the person to choose what they wanted to forget and allowed them to back out up until the last minute, but we didn’t want to be able to undo it to add a more dynamic process of feeling to a not-very-dynamic object. We added the “fire” at the top to add more criticality to the interaction, but we realized after the crit session that it could have been done better. We were also going to let the other person know that they had been forgotten in the video, but we had to cut the scene, as we didn’t have enough time left to include it.

We would like to thank Professor Byrne for his insightful and helpful feedback and lectures featuring many ideas that inspired this project. We would also like to thank Wei Wei Chi for his help with some of the technical aspects of the project!

We used this video for help in figuring out using pepper's ghost for projecting:

We used the following two websites for help with the code of getting the fire in the trash can.  The bottom link was a code that we modified to work for neopixels and the top link was a website we used for help coding neopixels.

This project will be a video that demonstrates a garbage can that can help a person to forget someone by removing all digital traces of them be it on Facebook, old photos, old messages, and even the most obscure traces like Pokemon GO.