Made by Vera Schulz

A pocketable, manipulable device that lets you physically imprint memory and recall or trigger memories at chosen times.  It will make it easier for people to recall and strengthen memories important to them and will give them a tangible connection to their memories.

When I thought about the concept of creating a memory prosthetic, I knew I would be drawn to a project that would address the issue of memory recollection and encoding. How to create an idea that addressed this large of an issue and posed a solution to "blurry memories" was one of the main obstacles. At the beginning I found myself drafting model after model, on a paper, looking at form and function, what would be the most comforting for a person to use for recollecting memories. I wanted it to be a token, an item that can visually represent the memories that reside in the limbic system while giving the user a feeling of familiarity with the item so that encoding or "saving" a memory onto the object would not be strange to do. By creating a token, which can replay saved memories of the user and then have the user re-experience them how they had them but tangibly, became the solution I wanted to create. With this, the individual could revisit their memory countless times, but in a physical setting, which could potentially trigger deeper feelings and recollection of the actual memory, because they could touch, here and see some aspects of their memories. From this, I knew that I wanted to design a pocketable device that lets you physically imprint memory and recall or trigger memories at any chosen time. The device would make it easier for people to encode and recall memories important to them and give them the physical control over them. It would allow them to re-experience the memory real-time because they could touch it, hear it and see it in front of them! I also believe that a device like has its applications as well in individuals who have had memory loss or suffer from diseases like Alzheimers and Dementia, because it could help them rebuild their memories. In practice, the device would have multiple ways of being used. The user who remembers their memories could communicate to it by recording music or their voice, then, add a color or light pattern and also tactile impact, and the device would then replay it to the user. For the user who does not have strong memories another person who shares the memory could program the device and play it back to the user, who lacks the memory and let them touch it and look at it. All then, intending to strengthen the user's recollection and attachment to a certain memory. 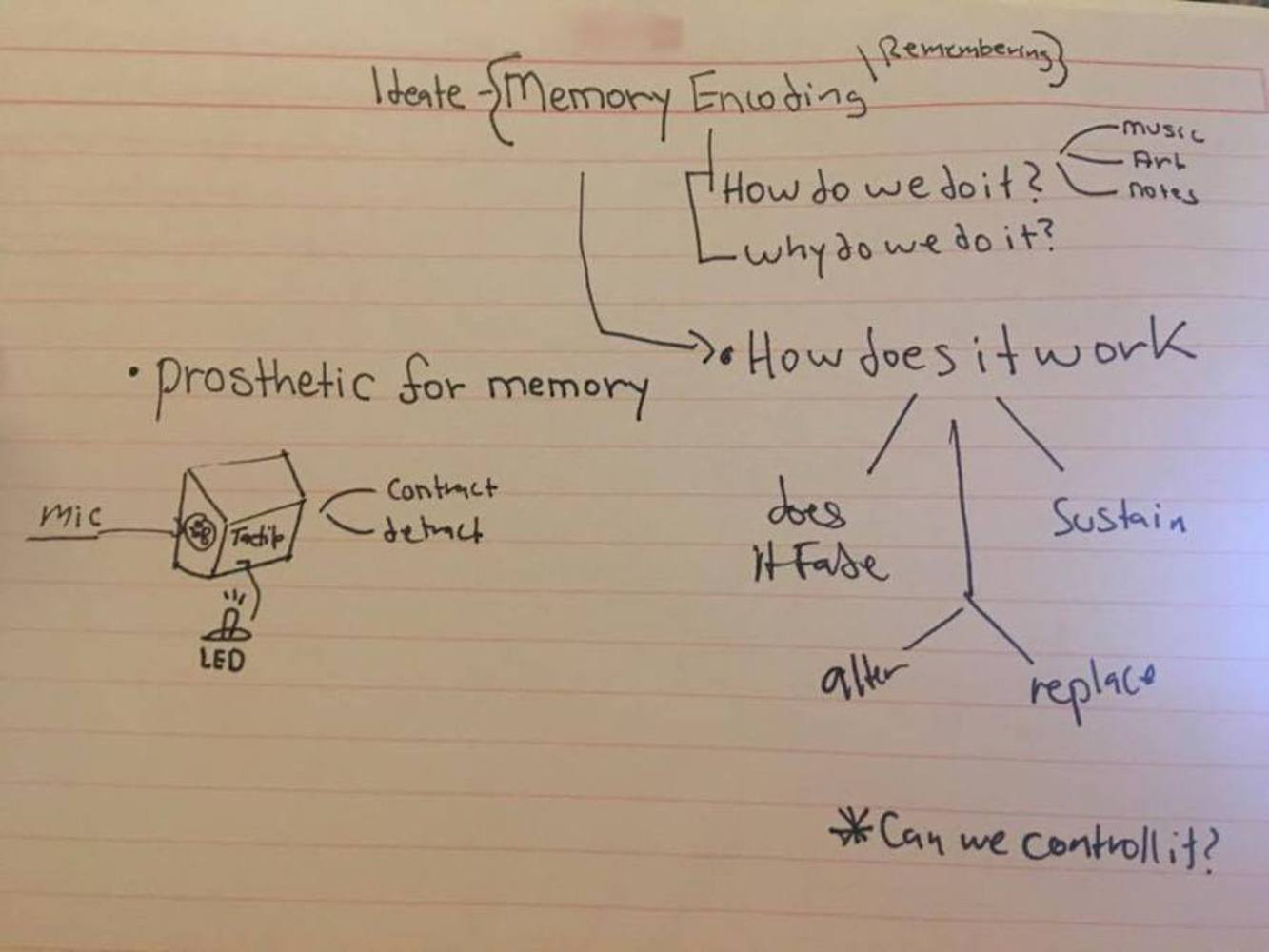 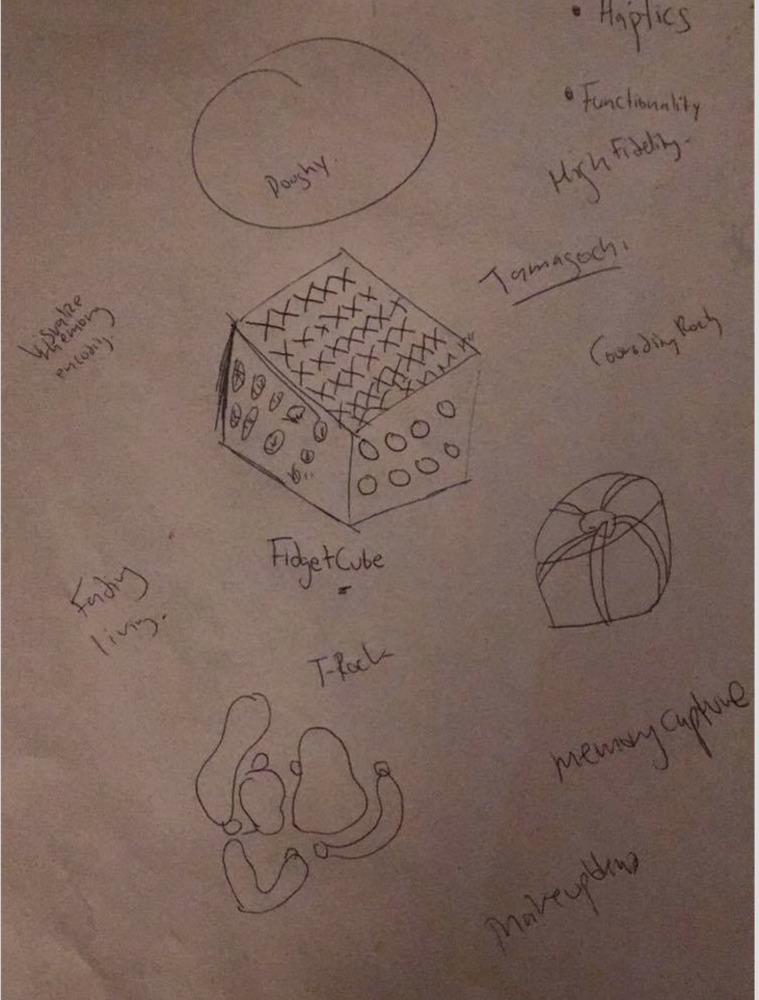 0
Original Sketch of my prototype 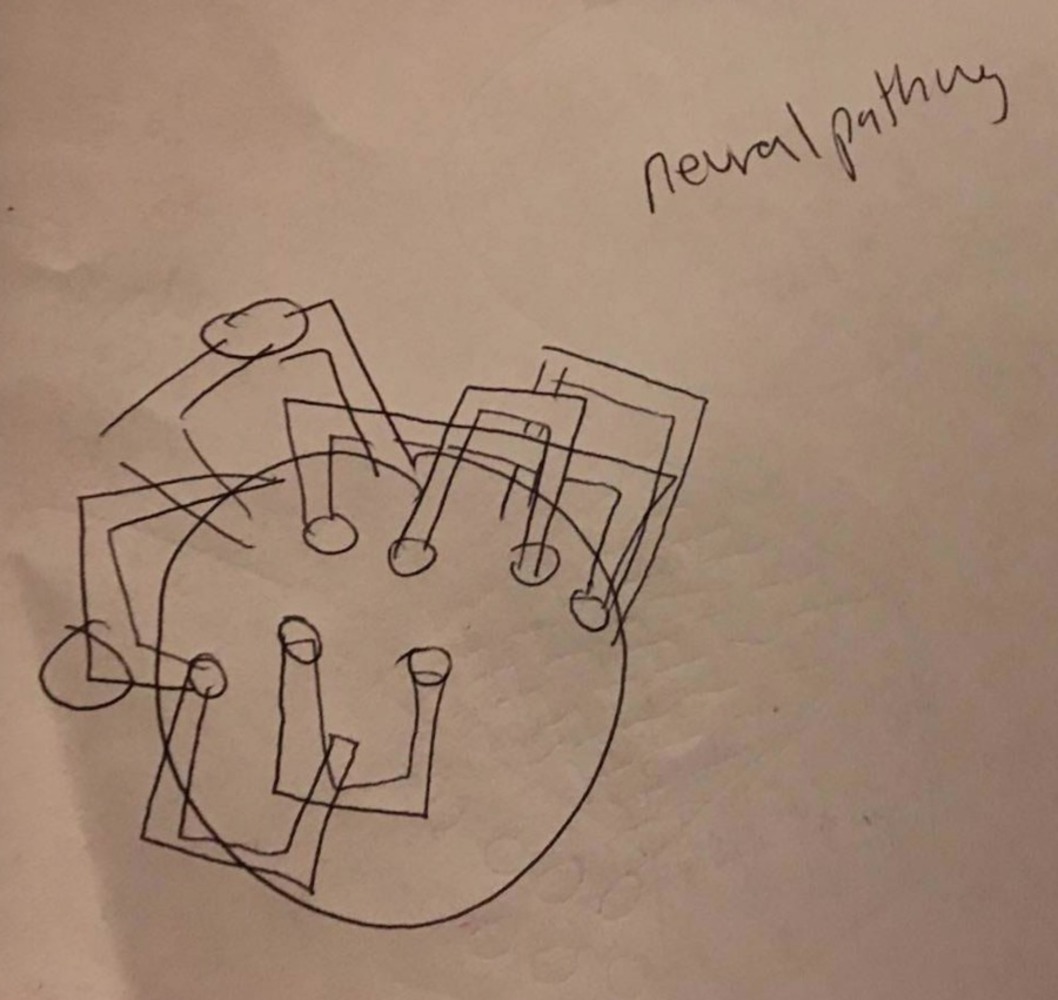 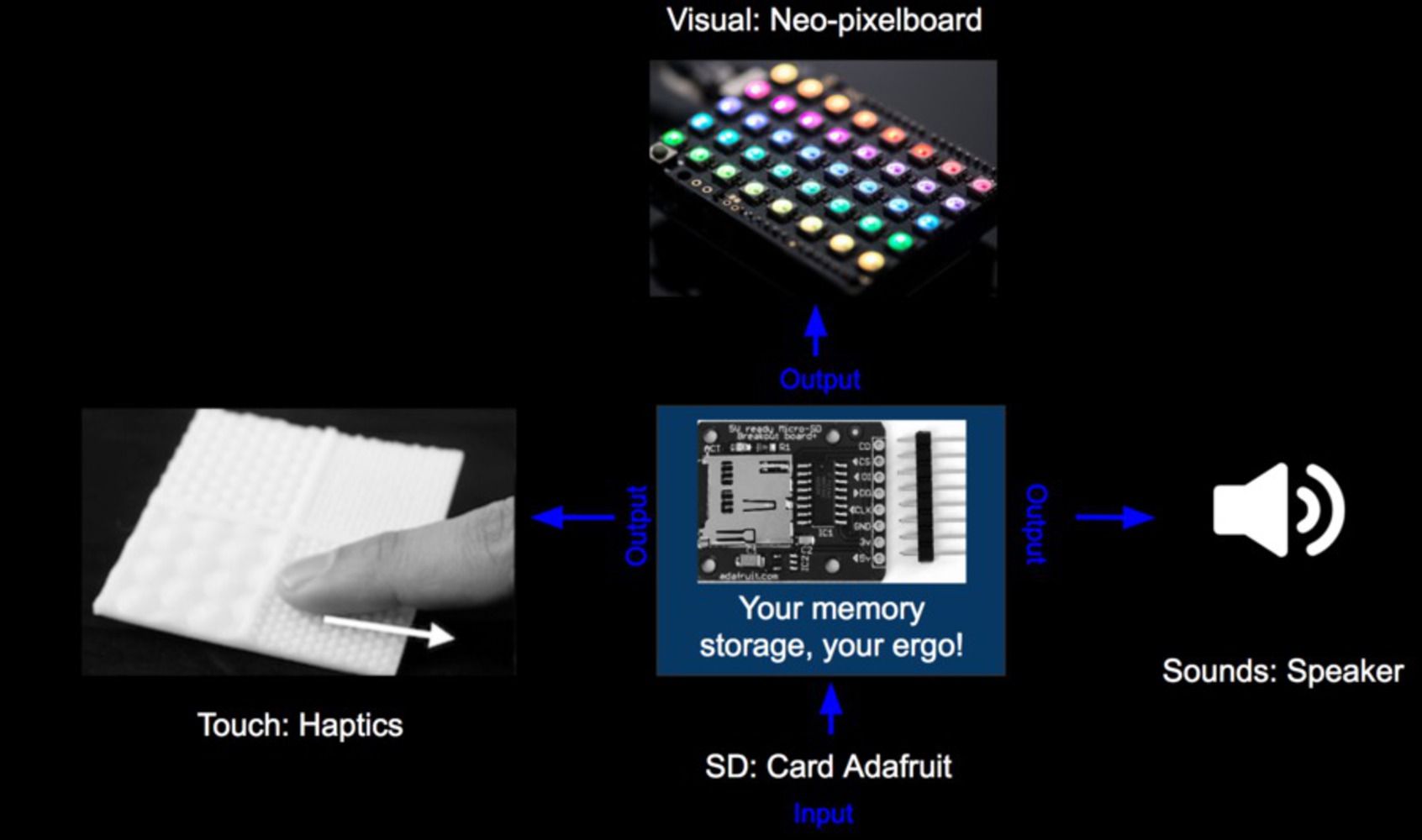 0
I ended up constructing a colored structure that mimicked a small scale version of the network of connections between synapses. 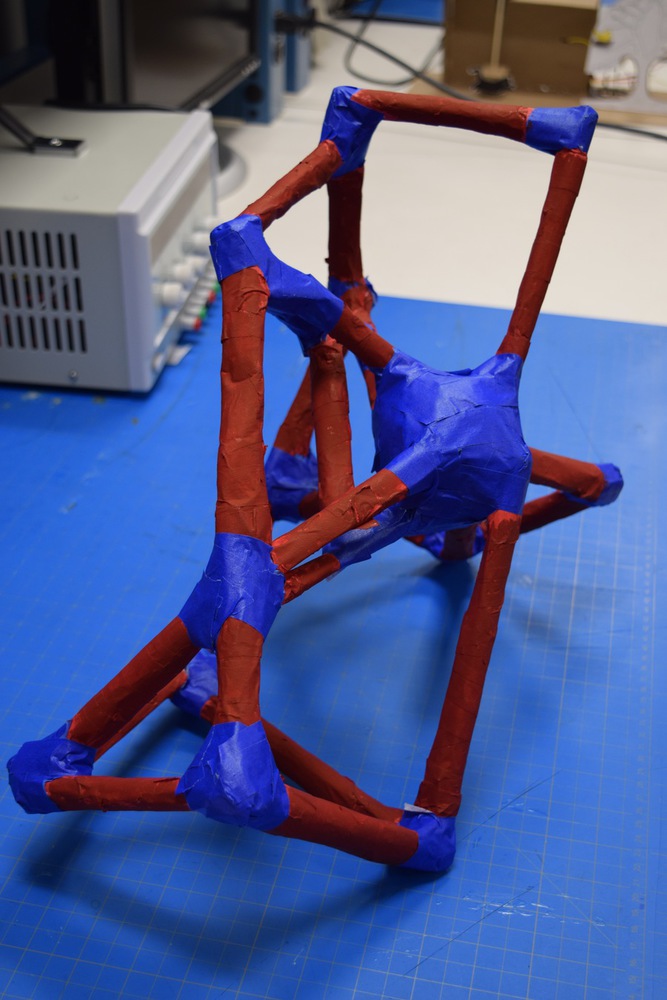 While I was brainstorming ideas in how I could decide what type of a form to give my object, I realized that I was going deeper and deeper into design questions, that should be addressed later in the process. I realized that I was thinking too much about user preferences, materials, and forms when I should actually focus more on the process of creating. I started looking at objects specifically, stress balls and fidget cubes, and realized that what I was looking for was an ergonomic shape on which I could imprint my memories, realizing how technically challenging creating this structure would be, I decided to build a small-scale structure of our brain's synaptic network out of used note-cards and masking tape. I had been inspired by looking at a brain and seeing a visual of the complex and large networks and wanted to visually reconstruct it. As I built the structure I varied the "length" between the blue connectors (symbolizing the memory) and the red tubes (which symbolized the connections and pathways between synapses), making the structure a bit abstract but it gave me a structure which I could use to explain how new memories are formed and how the synapses in your brain can branch out and form new connections, when a memory is revisited. After finishing my structure I turned to look at what technologies, were available to make my "Ergo" a reality and even though I was not able to physically wire and code a prototype of its functions, I came up with a diagram to show how it could work.

0
Hanging view of the prototype 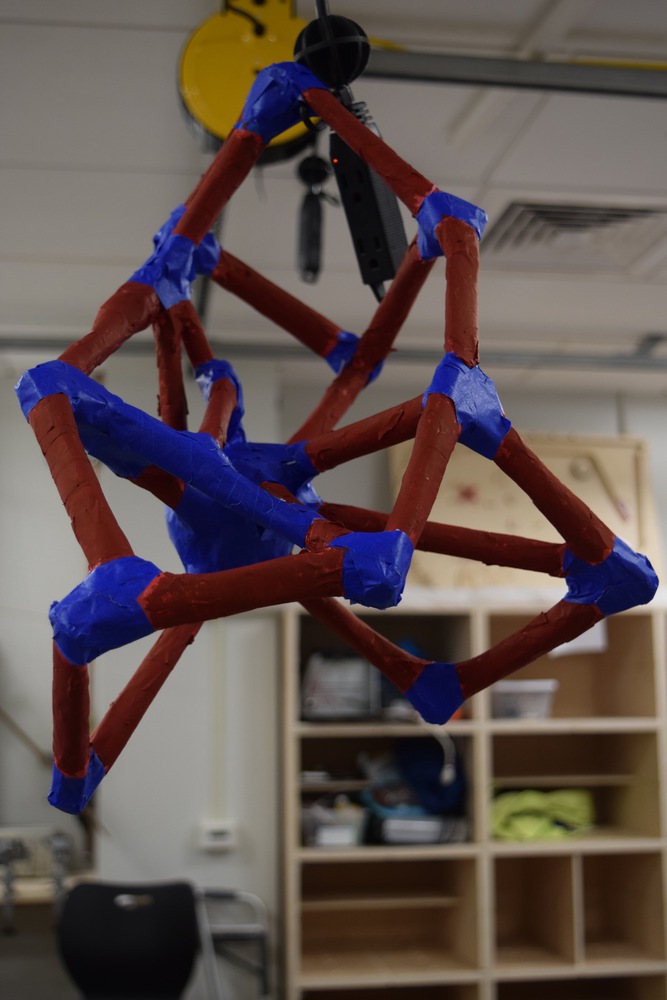 0
Side View of Prototype 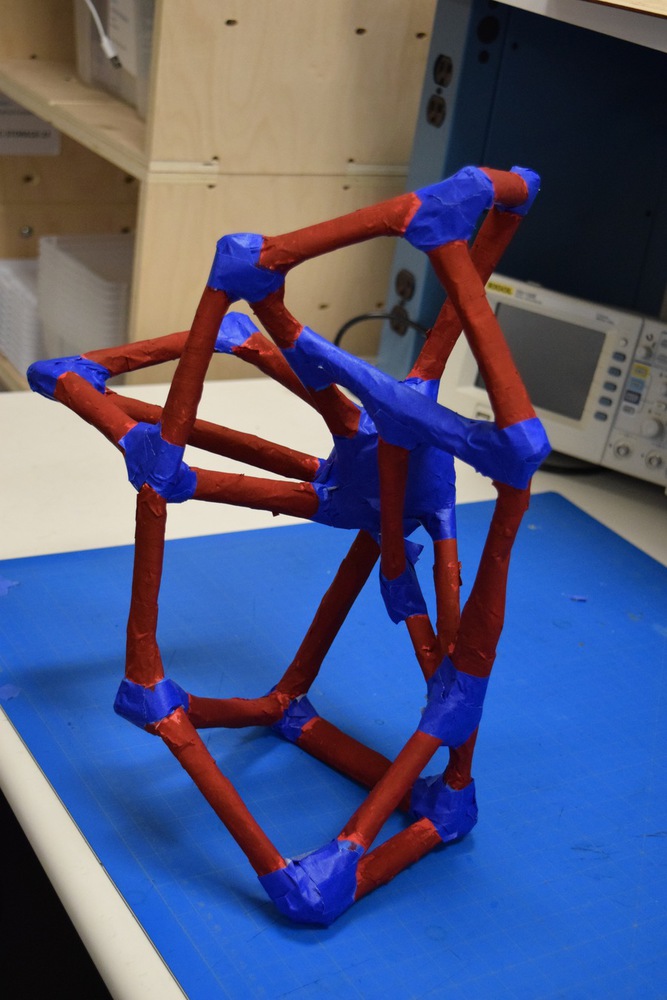 Precedents:
At the start of my research, I became interested in the idea of the brain and memory encoding, after viewing the projects of Soohyun Park and Phillip Stearns. Even though both artists projects have different themes they focus on, they visualize memories and experiences in fascinating and beautiful processes. After looking into their projects more deeply, I decided, I wanted to combine the encoding process of memories, with a visual and captivating display, that stimulates and augments the user's memories. My work has always had a tendency to be abstract because I believe that the simplest things in life, can have the most complex questions attached to them, and this is especially true of the brain and how we perceive it and ourselves. Being an Intelligent Environments minor, I found myself looking at this prosthetic as how it would impact environments where the person goes, and that is also why I want to explore the power of sensory and tactile feedback, in recalling or intensifying memories. What mostly drove me to pursue this project was when my notion that our memories are always there and never change was disrupted. I wanted to have full control over my memories, and not alter them every time I revisit one, I would want the opposite effect, to intensify them. Also after looking at the Stanford CharmLab project of the deformable surface haptic displays, I wanted to add a tactile aspect to my object that could change shapes. It made me wonder if such a surface would make the user feel more in control of the device if they are able to alter its shape?

Process:
For my fabrication, as aforementioned, I designed a structure, which resembles the neural network of the brain. In terms of my structure, I only made small alterations, to my initial structure: As I created my structure, I realized that keeping it covered in yellow and blue masking tape did not look appealing and to me, it did not make sense as a visual map for the synapses' network. So I decided then to buy red and blue tape to stabilize the structure and to then paint it, to give it a more glossy finish. The structure was lightweight because it was built using notecards and colored tape.
When it came to mapping out how my product and schematic would look and work, I took a more practical approach, in choosing which components that would work the best combined.  I wanted to choose a combination that would complement each of the components the best, which is how I came to consider combining light, sound and a tactile surface. Users would have the ability to experience their memories through sensory stimulation. After I had established what components I would use, I created a flow structure that showed how visuals, sounds, and texture would be shown, and how it would be transmitted to the user. Then, I created another diagram that showed the user flow and what they would have to do to customize or interact with the device, Ergo.

Open Questions and Challenges:
The main challenges of the project are about how it will be able to accomplish the tasks that it is given, replaying memory and how it will be stored in the prototype. What shape would be the best ergonomically and would it be able to receive and store data. It was also important to consider what the user would feel comfortable holding and would want to carry with them.

Some open-questions:
Will we become co-dependent on such a device and use it as a substitute for experiencing real memories? How can we make sure that the device helps us and does not overwhelm us?
Will this shape how we preserve memories in the future, instead of letting them disappear or become blurry we will want a database that replays or shows our most treasured memories?
How probable is it that individual's memories will be augmented or triggered by sensory information like sound, visuals, and touch? Individuals remember the smell of roses for only a certain amount of time, but as time passes we forget that smell, the same goes for remembering the feeling of touching something, our memories blur or fade. The one memory we tend to recall is sound, which is why a lot of individuals will remember a song for probably their entire life.
It is important to think about how we will remember our memories in the future. In the past individuals associated pictures and items with memories and now we do the same but we depend more heavily on digital documentation and social profiles which digitally represent us online.

Reflection:
Making this project was refreshing because not only did it allow me to visualize abstract ideas and brainstorm solutions, but it also made me think about how I remember memories. One thing I realized is that each project that I have done reflects certain feelings and thoughts, and when I revisit the project in the future, I wonder how my feelings will change.
I learned a lot about the brain and how encoding memory and recalling memory works, it was powerful to see how the brain actually worked. Learning that every time when we revisit a memory, it is altered slightly was semi-shocking because we think that memories stay the same when in fact, they change like we do as we age. It made me wonder how many of my memories, that I had reflected on, had changed and how some parts of the memory were stronger than the other, changing my perception of the memory, and how age also greatly affects your perception.
I would start out working with electronics far earlier, to see what is actually plausible, and then focus on creating forms and structure. I would look to plan my process better and have a working/interactive prototype that I could test on people. I would have liked to take my project further to the point of an interactive prototype but I think that would require more resources and time.
In the future, I would want to build and test multiple functioning prototypes and figure out which ones would work the best for users. I would want to involve users in the actual process and have them help evaluate my idea, and then see how they would react to different iterations, in terms of not only form and ergonomics but also technologies. I would want to also see how individuals with different memories and experiences would feel about the item.

A pocketable, manipulable device that lets you physically imprint memory and recall or trigger memories at chosen times.  It will make it easier for people to recall and strengthen memories important to them and will give them a tangible connection to their memories.